The Eun-gwan Order of Cultural Merit is the nation’s second-highest honor for contributions to culture.

Paik, along with his award-winning actress wife Yoon Jung-hee, showed up at a press conference in Seoul with a sense of humble pride Tuesday. “I’ve been very much loved by my home public,” Paik said. “Having been awarded with such honor, I’m delighted, grateful and feel more responsible.” 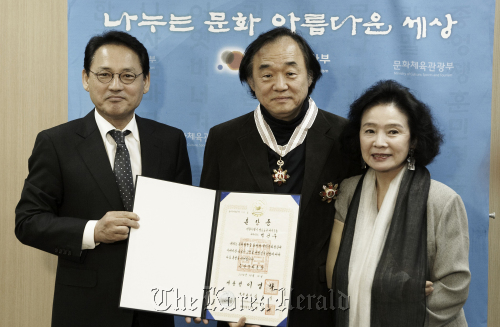 Pianist Paik Kun-woo (center) poses with Culture Minister Yu In-chon (left) and Paik’s actress wife, Yoon Jung-hee, after receiving the Order of Cultural Merit on Monday. (Courtesy of Credia)
Born in Seoul in 1946, Paik gave his first piano concert at the age of 10 with the Korean National Orchestra in Seoul. Having studied at the prestigious Juilliard School of Music in New York, Paik has been performing with the world’s most acclaimed orchestras including London Symphony Orchestra, Orchestre National de France and Pittsburgh Symphony.

Paik said growing old has changed the way he appreciates music. “When I was younger, I interpreted music rather emotionally,” he said. “But I’ve become more careful and cautious as I grew older; I try harder to listen to what the music wants me to hear.”

Paik said he learned about psychological expressions and the sense of good and evil by performing Scriabin. And when playing Liszt, Paik said one can learn about piano the very instrument itself. “When playing Liszt you get to think about how you’d express your own existence whether you’d be a simple piano player or go beyond that.”

Paik’s honor follows that of his wife Yoon who won the Best Actress Award at the Daejong Film Awards for her highly-acclaimed performance in “Poetry” on Friday. Yoon also participated as a jury member at the Mumbai Film Festival last week. The star couple met in Paris, France, in 1974 and got married in 1976.

Paik will join the Israel Philharmonic Orchestra and world-renowned conductor Zubin Mehta at concerts on Nov. 13 and Nov. 14 at the Sejong Center for the Performing Arts and Seoul Arts Center, respectively. “I am excited,” Paik said. “The Israel Philharmonic Orchestra is an excellent orchestra and I think the Korean crowd would very much like them.”

On supporting young artists in Korea, Paik said there should be more support from the government. As for himself, he is not sure if he wants to get into teaching. “I’ve been always skeptical about “teaching” piano because one has to find his own “language” in himself to play that instrument,” he said. “But I think there should be more systematic support from the government for the young who want to pursue a career in music.”After all, it takes a lot to create good music: talent, personality, but most of all, being genuine, Paik said.