Speaking at the press conference announcing the film’s release, Ryu said the film forgoes elements of satire and instead is more concerned with examining how the film’s individual characters gradually lose their way as harbingers of law and justice.

There has been plenty of buzz surrounding the film, which has been described as an unapologetic look into corruption in the Korean justice system.

“This film has its sights focused more on the consciousness of individual characters,” Ryu said. 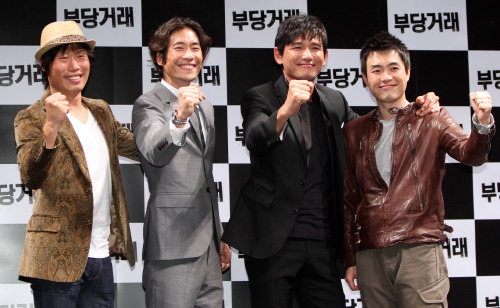 (From left) Yu Hae-jin, Ryu Seung-beom, Hwang Jeong-min, and director Ryu Seung-wan pose for cameras after the press conference for upcoming crime thriller “The Unjust,” set to roll out in theaters nationwide on Oct. 28. (Yonhap News)
“It takes on issues of corruption in the justice system specifically those who work for the metropolitan police department and the prosecutor’s office that are bankrolled by these shady real estate tycoons and clandestine organizations.”

“The film is in no way a critical look into the Korean justice system, but individuals.”

Widely considered one of Korea’s top directors through acclaimed hits like “Crying Fist,” “No Blood, No Tears,” and “Arahan,” Ryu has for the past decade gained a modest following from passionate movie lovers through his pulpy crime thrillers and searing dramas about near low-lives.

The film centers on a botched investigation of a series of child murders that rock the country. When the likely suspect is unexpectedly killed, a patsy is chosen by the lead homicide detective Choi, played by Hwang.

He does so with the help of his sponsor and real estate tycoon Jang (Yu Hae-jin) on the condition that all information regarding his criminal organization would be covered up.

“We tried to let these despicable characters tell the story rather than peel the layers of the plot through flashy direction,” Ryu said.

“This wouldn’t have been possible without the believable performances by the film’s cast and I’m not just saying this just as a formality. All of the actors, from the leads to the supporting cast, turned in great, dedicated performances.”

Working for the first time with material written for him, Ryu said he found it to be a liberating experience as it allowed him to be more objective during the editing process.

“With films I wrote, it was difficult to be cold-hearted in cutting scenes out because I had a personal attachment to them,” Ryu said.

“But with material written for me, I saw that I could be more decisive with what to keep and what to leave out.”

This is the fifth film in which Ryu has cast his younger brother. With the exception of “The City of Violence,” in which director Ryu starred himself, he has worked with his brother in all of his films.

“My decision to cast him isn’t just because he’s my younger brother,” Ryu said.

“It has mostly to do with the fact he’s a great actor and it’s comfortable for me to work with him.”

In response, the younger Ryu said, “A relationship between actor and director is always a professional one and it wasn’t any different in our case.”

“Having said that, he is known as a tough director to work with, and there were times I wanted to smack him.”

“Also, I was paid the same amount I would be paid for any other film. There was no, shady, under-the-table trade going on like our characters do in the film,” Ryu joked.