But although the Chan name has translated to big bucks at the box office, not every product he touches turns to gold. In fact, when news broke in July that an anti-hair-loss shampoo he promoted allegedly contained carcinogens, Chinese cyberspace and media were buzzing about the “Jackie Chan curse.”

Consider the auto repair school that Chan plugged to aspiring Chinese mechanics: It became enmeshed in a diploma scandal. Another of his sponsors, a maker of video compact discs, went bankrupt and saw its manager jailed for fraud. An educational computer that Chan pitched to children called the Subor Learning Machine flopped. And a cola he quaffed named Fenhuang fizzled.

More recently, an air-conditioner brand that Chan promoted was hit by a report that one of its units exploded. Media wags couldn’t resist invoking the Jackie jinx.

“He has become the coolest spokesperson in history,” said an editorial in Oriental Guardian, a Nanjing newspaper. “A man who can destroy anything.”

In the U.S., companies have learned the hard way about the risks of using celebrities to pitch their products. Philandering cost Los Angeles Lakers star Kobe Bryant and golfer Tiger Woods millions in lost endorsements.

But rather than personal scandals, Chan‘s difficulties stem from his willingness to shill just about anything, including well-known global brands (Canon cameras), obscure regional products (Sinian sticky rice balls) and so much more (Hong Kong tourism).

His seeming lack of discrimination has made it more likely that he would pitch some clunkers, analysts said.

“When you have some-one with so many brands, the probability of things going wrong is markedly higher,” said Saurabh Sharma, a strategic planning director for Ogilvy & Mather Beijing.

“It’s rare to be in the industry for so long and also be clear of controversy.” 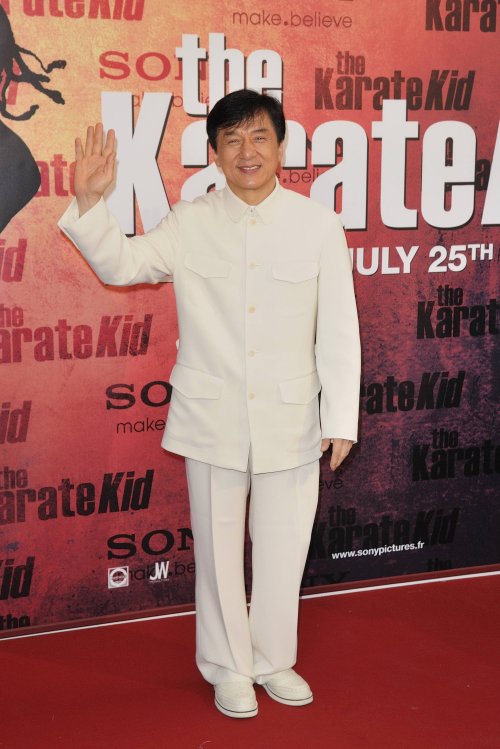 Jackie Chan arrives for the France premiere of “The Karate Kid” held at the Grand Rex theater in Paris, France on July 25. (Nicolas Genin/ABACAPRESS.COM)
Chan‘s representative said the 56-year-old actor was not available for comment.

Experts said it was unlikely the recent shampoo setback would do anything to harm to the entertainer’s appeal to advertisers, who know that Chan‘s signature smile and voluminous side-swept hair are recognizable from Shanghai to Tibet. (Plus, he’s huge in Japan.)

Chan is believed to have at least two dozen endorsement contracts at present. Entrgroup.com, a popular Chinese entertainment website, ranked Chan the nation‘s most powerful celebrity brand for his fan appeal, charity work and overall marketability.

Some U.S. celebrities limit their product endorsements to enhance their aura of exclusivity, but experts said China’s media market is still too small, and the country too big, to worry that Chan will suffer from overexposure.

“Generally, in a country of 1.3 billion people, celebrities want as much exposure as possible,” said Tiger Hou, an analyst for Entrgroup.com

Born in Hong Kong when it was still a British colony, Chan got his start in the island‘s film industry as an extra in martial arts movies, rising to stardom as an actor, director and singer. His Hollywood breakout came in 1998 with the blockbuster buddy-cop movie “Rush Hour.”

Chan in recent years has focused his efforts on the mainland Chinese market. His status as a cultural icon was cemented when he sang at the closing ceremony of the 2008 Olympic Games in Beijing.

But critics say Chan has crossed the line and become an advocate of China’s communist regime. He has spoken out strongly against an election won by Taiwan‘s pro-independence party. And he raised hackles last year when he told a summit of Asian leaders that China did not need a free society.

“I’m gradually beginning to feel that we Chinese need to be controlled,” Chan said at the time. “If we are not being controlled, we‘ll just do what we want.”

So when the shampoo story surfaced in July, some bloggers and pundits blasted Chan as a calculating opportunist.

“It’s he who needs to be controlled,” said social columnist Qiao Zhifeng. “Look at how many commercials he‘s done. It’s an abuse of endorsements.”

For weeks, Chang said little about the flap. But with the controversy refusing to die, he broke his silence at a Shanghai charity auction Aug. 8, speaking out defiantly against his detractors.

“Incidents like this, where shampoos are reported to have problems, are not new,” he said. “Someone is trying to harm me and BaWang.”

Besides, he added, “I have always been very careful with what products I endorse.”

At a time when many Chinese products are mired in safety scandals, consumers look to Chan because they view him as trustworthy, said Hou of Entrgroup.com. Hou said he believes Chan will continue to hold that trust, despite the setbacks.

“Jackie Chan is one of China‘s most credible celebrities for a reason,” Hou said.

“In all his movies, he’s always insisted on doing his own stunts. I‘m confident he will recover from this controversy. The whole thing will blow over.”