[ The Korea Herald – Send E-mail ]
Sul says his latest film was the most difficult
By
Published : Aug 12, 2010 - 17:36
Updated : Aug 12, 2010 - 17:36
Of all the slam bang action extravaganzas Sul Kyung-gu has headlined in the past, the “Public Enemy” and “Haeundae” star says his latest summer tentpole was the most physically demanding of his career.

“I wanted to quit mid-way through the filming,” Sul said during the official unveiling of his latest film “Troubleshooter” in Seoul on Wednesday where he was joined by co-stars Lee Jeong-jin, Oh Dal-soo, Song Se-byeok, Lee Sung-min and director and co-writer Kwon Jyeok-jae.

“This film took a toll on my body ― it was the most difficult shooting experience I’ve ever had.”

The 42-year-old actor says he suffered from a muscle ruptured in his chest during filming and had difficulties negotiating a key sequence involving a wired jump from a five story building.

“When the director told me my stunt double was going to be doing the jump from the top of the five story building, I told him I’d do it,” Sul said.

“But once I actually got up there, I couldn’t even get my foot off the rail, so we ended up spending the entire day filming that scene.”

Of his first time experiencing wired action sequences, he added “our director saw I was very adamant about doing my own stunts, so he assumed I had already done some wire work on my previous films, but in fact, that was the first time I’d ever been harnessed with those things.”

Among the many action set-pieces featured in the film, Sul says his close-quarter fight sequence set in a public bathhouse with model-turned-actor Choi Jee-ho was especially difficult. 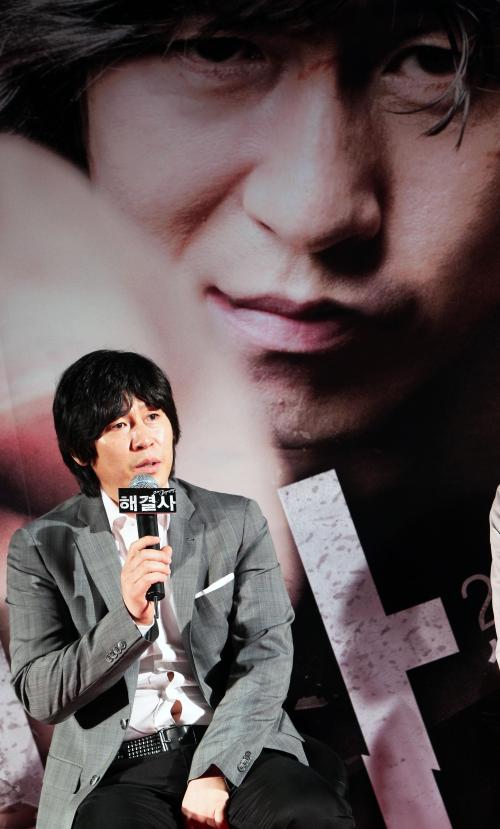 Sul Kyung-gu answers questions about his latest film “Troubleshooter” during a press conference in Seoul on Wednesday. Yonhap News
“Here is a guy, a fourth degree black belt from Yongin University, is over 190 centimeters tall, and in a fight scene with me,” Sul joked. “Needless to say, I got roughed up a lot during that scene and I felt like I couldn’t breath inside that small space while filming that particular sequence all day.”

However, Sul says the most difficult time for him was even before the film had gone into production.

When the script for “Troubleshooter” landed in his trailer while he was still in the middle of filming “Haeundae” he says he jumped on board after the first reading.

“The first time I sat down and read the script, I decided to get involved with the project,” Sul said. “But pre-production on the film ran into problems in securing financing that Ryu Seung-wan and his production team had to put up with.

”After some time had passed, I received a long text message from Ryu ― this was when ‘Haeundae’ was doing very well at the box office ― he wrote saying that the project was going to be stuck in development limbo.“

Not one to throw in the towel quite so easily, Sul says he reaffirmed his committment to the project and told Ryu and producers to “wait and see” and that he would “stymie all other offers.”

Ten days later, Sul was contacted by the film’s producers telling him the production was back on track after securing financial backing.

In the film, Kang Tae-sik (Sul) gets framed for a murder by a ruthless boss of the criminal underworld played by Lee Jeong-jin and must use a wide array of techno-gadgetry at his disposal to clear himself and exact revenge.

The story is highlighted by popular character actor Oh Dal-soo and fast emerging comedic actor Song Se-byeok known by many as the dim-witted detective in last year’s “Mother.”

The film looks to be a silly romp combining comedy with action that the producers say will be released just in time for the Chuseok holiday in September.