Powder soft ice, or granular chunks, sloshed up in milk, fluorescent and sticky sweet syrups or the like never fail to satisfy during these hot summer months, be it in the form of a Puerto Rican “piragua,” a Vietnamese “che ba mau” or a Korean “bingsu.”

Here in Korea, when summer rolls around, nearly every cafe puts out its own version of the classic, cool treat ― routinely in the form of the native bingsu ― piling gobs of red bean paste over shaved ice.

The toppings vary from eye-popping jellies, cornflakes, mounds of ice cream, to more modest combinations of powdered green tea or just, simply, milk. Rarely does a bingsu forgo red bean paste, however, which is why this dessert, more accurately known as “patbingsu” (which means red bean paste ice flakes), is reputed to stem from Japan ― from whence a cold red bean paste dish was introduced during the Japanese colonial period (1910-1945).

That does not mean that shaved ice treats were foreign to Korea before the 20th century. Records show that during the Joseon Dynasty (1392-1897), Seobingo ― the government office in charge of the royal ice box ― would share ice with fellow officials, who would enjoy it finely crushed and mixed with fruit for a granita-like dessert.

Patbingsu holds a special place in Korean culture, summoning deep stirrings of nostalgia amongst those who can remember the first time they dipped a spoon into that cool marvel of ice, milk and beans.

In fact, fond memories of patbingsu’s past draw a loyal set of customers to the old-fashioned Korean bakery: Tae Keuk Dang.

Since its opening in Jangchung-dong in 1973, the storied establishment has stuck fast to its original recipes for bingsu and monaka-wafer ice cream sandwiches; never falling prey to the temptation to follow newfangled trends.

So has the interior.

Boasting a weathered white front and a huge sign that bears the motto “A Cookie Amongst Cookies,” Tae Keuk Dang invites visitors into the past, greeting them at the entrance with a huge-tiered glass case chock full of breads and pastries.

The ice cream and monaka- and sticky rice- wafer sandwiches ― sit in a quaint red-lettered white refrigerator box near the cashier. All you need to do is slide open the glass door on top and dip your hands in for your treat of choice.

According to Kwon, the milk for the bakery’s ice cream comes from the Tae Keuk farm in Namyangju, Gyeonggi Province. The resulting creamy confection ― which can be enjoyed plain, as coffee ice cream, or stuffed into a wafer-casing ― is not the rich, sumptuous stuff of today.

Mild, barely-there sweet and tasting more of milk than of cream, the best way to describe the unique taste of Tae Keuk Dang’s ice cream is to call it a minimalist expression of the summer dessert. 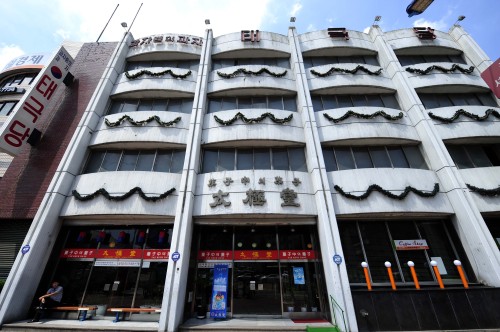 Old-fashioned Korean bakery Tae Keuk Dang remains the same since it opened in Jangchung-dong in 1973. A huge sign bearing the motto“A Cookie Amongst Cookies” invites visitors in for a taste of the past. Park Hae-mook/The Korea Herald
Encased in a monaka-wafer the snowy ice cream plays well against the slightly salty, buttery tasting shell. Plus there is the added fun of eating an ice cream sandwich that looks like a beige-colored Hershey’s chocolate brick.

The heart of the dish ― the red bean paste ― is made in-house. Generously heaped over the milk-soaked, shaved ice, the paste maintains the integrity of the bean from texture to taste. Sugar plays second fiddle to the nutty richness of the paste. 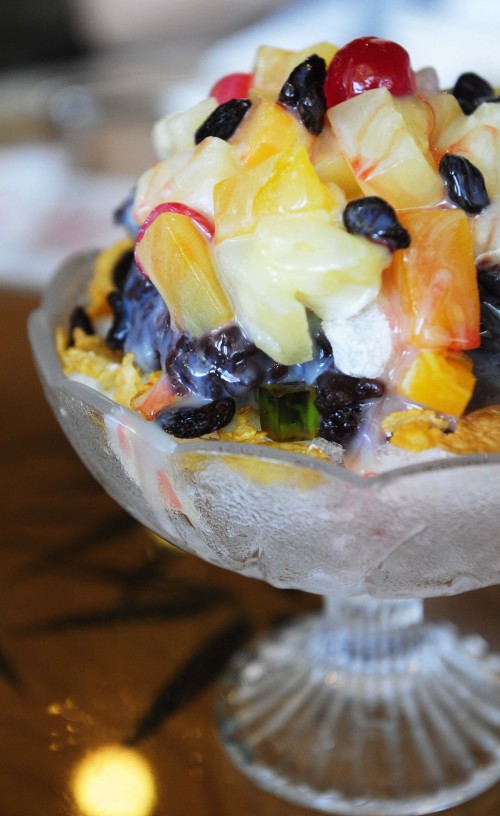 Tae Keuk Dang’s patbingsu stirs memories with a medley of bright jellies, fruit cocktail, cornflakes, sticky rice cake nubs and in-house made red bean paste. Laced with condensed milk and layered over milk-soaked shaved ice, this classic treat marries sugarysweetness with creamy nuttiness. Park Hae-mook/The Korea Herald
At Sinsa-dong’s Bari e Malgm ― a white and wood space with a Scandinavian vibe ― the bingsu is pared down to a homier treat, with a flourish here and there.

“This is tradition,” said Bari e Malgm president Lee Su-jung, holding up the cafe’s milk bingsu as an example of how the bingsu was done in the past.

Indeed, for those whose childhoods are filled with memories of hot summers when families would gather together, pull out the home ice shaver, and whip out a simple treat of shaved ice topped with chilled milk and red bean paste, the Bari e Malgm bingsu may feel infinitely closer to home. 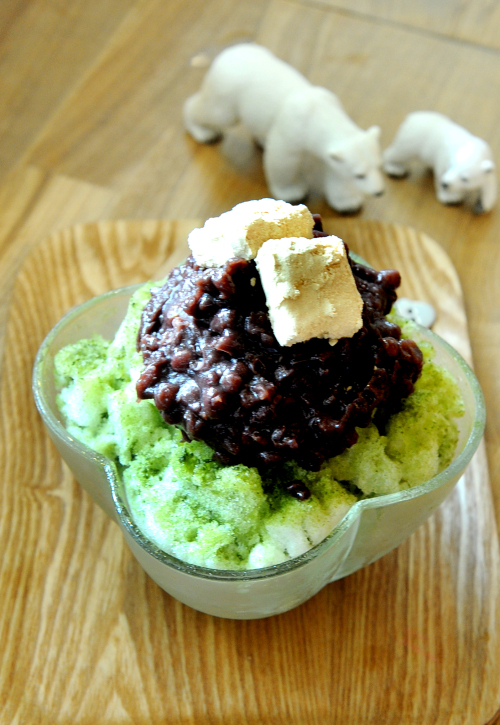 Bari e Malgm’s coffee bingsu is, in essence, an affogato-meetsbingsu. A scoop of vanilla ice cream, a shot of espresso and a garnish of almond slivers add texture and flavor to the traditional dessert. Park Hyun-koo/The Korea Herald
Fresh paste made from domestic red beans serves as the crowning glory for a bingsu that features condensed and regular milk, powder-fine shaved ice and two cubes of sticky rice cake coated in bean flour.

Upscale variations include a particularly toothsome affogato-meets-bingsu, where a scoop of vanilla ice cream and a shot of espresso add complexity to the traditional dessert.

But not everyone is a fan of red bean paste.

Snowmounteen offers a unique and bean-free take on the snow cone. Brought in from Taiwan, the newly-minted parlor’s “snow ices” bring new meaning to the concept of the snow cone. 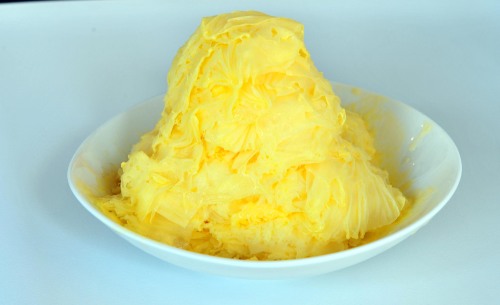 Snowmounteen’s mango “snow ice” achieves its cold, luminous flavor through a shaving machine that turns low calorie ice cream into a fondant-like heap of translucent sheets.Kim Myung-sub/The Korea Herald)
Low calorie ice cream is frozen into cylinders and then run through a Japanese ice shaving machine to create translucent, paper-thin layers that stack up quickly to create an oddly fondant-like, slightly chewy and creamy heap of a dessert.

Mango tastes like its glossed-over ghost ― cold, luminous but present. The juicy sugar of lychee is amped up by the solid ice cream-shaving process, while coffee walks the line between an iced Americano and an elegant sorbet.

For now this is the only place in Korea where one can sample this dessert. Other options are to fly out to other countries ― Taiwan, Japan and Singapore, to name a few ― that sell it.

To get there, go to Apgujeong Subway Station Line 3, Exit 2. Walk straight toward Galleria Department Store. One block before the department store, turn right, right before you reach Hana Bank. Walk straight till you hit the intersection with Starbucks on it. Take the left fork and walk straight for two blocks. Snowmounteen will be on your left.