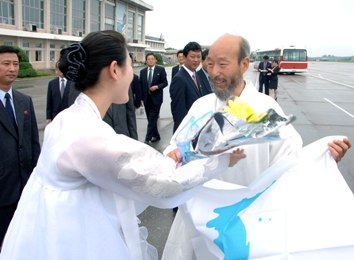 Pastor Han is greeted by a North Korean woman in Pyongyang on Saturday. (Yonhap)
A South Korean pastor arrived in North Korea Saturday to attend a ceremony marking the 10th anniversary of a historic inter-Korean summit, the North's media said, a trip unauthorized by Seoul, according to news reports.

The South Korean was greeted by members of North Korea's Committee for Implementing the June 15 Joint Declaration, including committee chairman An Kyong-ho, the North's Korean Central News Agency (KCNA) reported, referring to a joint statement leaders of the two Koreas issued after a 2000 summit.

Han and many other South Korean activists had requested government permission for a trip to Pyongyang for an annual joint ceremony commemorating the first-ever summit, but Seoul refused to give clearance after an international probe concluded that the communist nation torpedoed a South Korean warship in March, killing 46 sailors.

Under national secuirty law, all South Koreans need government permission for a trip to North Korea.