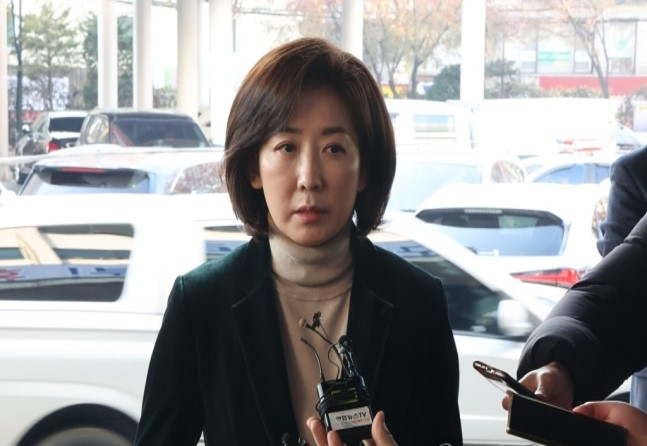 President Yoon Suk Yeol dismissed the vice chair of the of the presidential committee on low birthrates Friday, his office said, after she offered to resign following a clash over birth promotion policies.

Na Kyung-won, a former four-term lawmaker, was relieved from the posts of vice committee chair and ambassador for climate and environment, senior presidential secretary for press affairs Kim Eun-hye said during a press briefing.

Na told a press conference the country should adopt policies similar to those of Hungary, under which the government allows couples to take out a 40 million-won ($32,000) loan when getting married, and release the debt partly and then in full after the birth of their second and third child, respectively.

Na tendered her resignation Friday, giving rise to widespread views that she is likely to declare a run for leader of the ruling People Power Party.

She submitted the hard-copy resignation letter, as Yoon had shown no reaction for days after she expressed her intention to quit in a text message and a phone call to presidential officials earlier this week.

Yoon's silence was widely seen as an indication that he is against Na running for People Power Party leader.

The 60-year-old Na is a strong favorite in the People Power Party chairmanship race, leading other contenders with a wide margin in opinion polls, though she has not officially declared her bid yet.

The People Power Party plans to hold a national convention on March 8 to pick a new leader.

An opinion poll released this week showed that People Power Party supporters picked Na as their favorite for party leader, giving her almost twice as much support as the closest challenger Rep. Kim Gi-hyeon. Other contenders include Reps. Ahn Cheol-soo and Yoon Sang-hyun.

People Power Party members close to Yoon are widely believed to be backing Kim, and they are concerned that if Na runs, she could split the pro-Yoon votes and let another candidate less loyal to Yoon take over the party.

Earlier Friday, Na wrote in a Facebook post, "I do not believe you people genuinely wish for the success of President Yoon Suk Yeol and his government," apparently referring to pro-Yoon lawmakers who have pressed her to opt out of the People Power Party leadership race