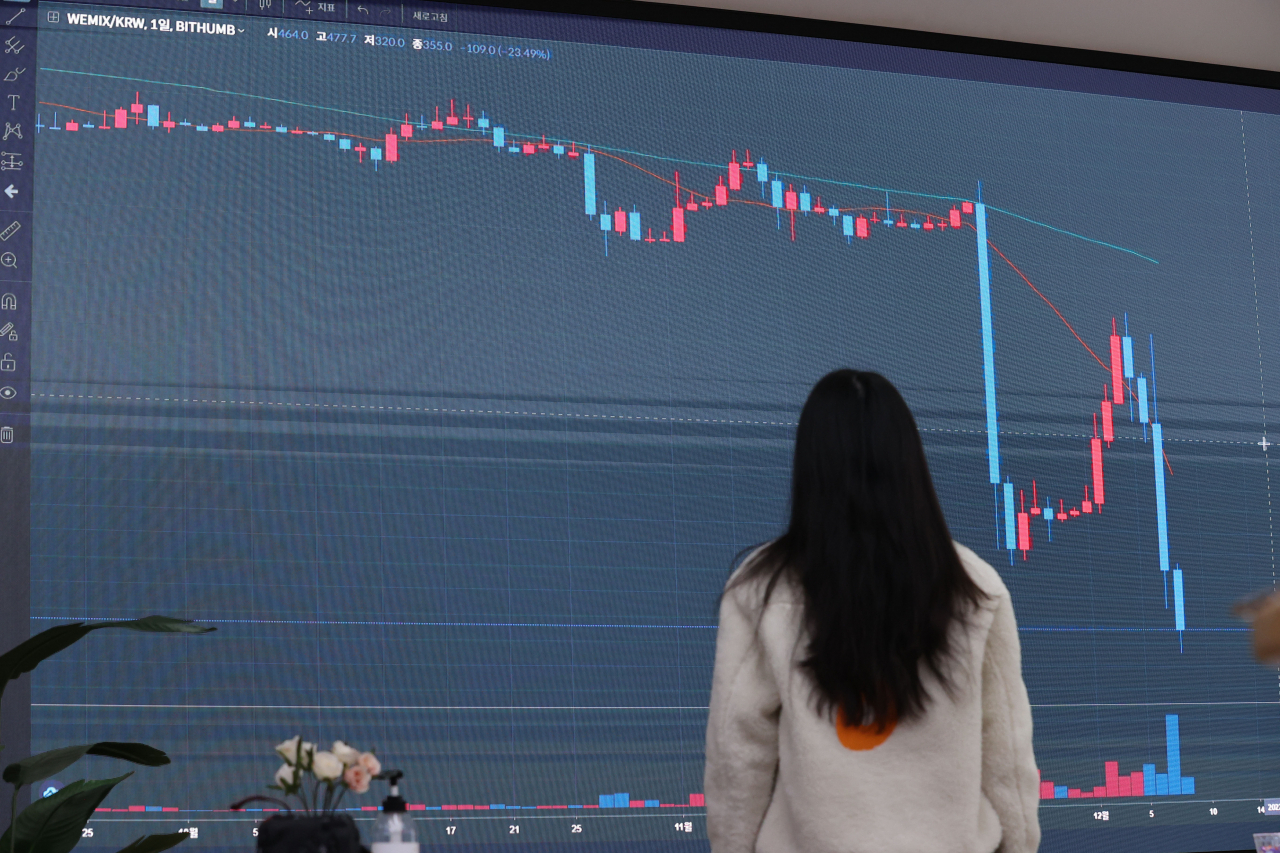 An electronic board showing the wemix chart at Bithumb exchange center in southern Seoul, Thursday. (Yonhap)

After being pulled off from the country’s major crypto exchange platforms, Wemix decided to repurchase some $10 million worth of its digital assets and remove them from circulation to increase the value of the token.

Wemix was pulled off from Korea’s top crypto exchanges under the Digital Asset Exchange Alliance (DAXA) on Thursday, following a Seoul court’s dismissal of an injunction against the delisting of the cryptocurrency. DAXA owns the nation’s top five crypto exchanges.

The Wemix Foundation said Friday it will buy back the $10 million in Wemix coins and “burn” them, or eliminate them from circulation, which will reduce the total supply and add more value to the coins.

The foundation said it will purchase Wemix coins for 90 days until March 8 for destruction. It said it will allocate its budget for the campaign through “attraction of investment, disposition of assets and provision of secure capital including loans from affiliated companies.”

“Wemix has achieved an unprecedented success in the global blockchain industry through genuine use cases and utility value, and will overcome this temporary setback to once again prove its true value,” the announcement read.

Though delisted from major crypto exchanges, Wemade's cryptocurrency Wemix can still be traded in Korea as it has been listed on the exchange platform GDAC.

A few hours after it was pulled off from the exchanges, crypto exchange GDAC listed Wemix on its BTC and ETH markets. Clients will be allowed to withdraw their Wemix coins on the platform from Thursday, GDAC said.

“Wemix has made improvements on the feedback after being notified of the delisting from the DAXA,” said Ash Han, CEO of Peertec.

“Wemix is a blockchain project with rare examples in Korea, there should be more projects like this,” said Han who oversees GDAC. “I hope the Wemix crisis can become an opportunity that elevates the standards of the virtual asset market.”

However, Wemix cannot be exchanged into Korean won on GDAC, as DAXA’s exchanges are the sole operators of the crypto-won exchange.

Outside of Korea, investors can also transfer their coins to other foreign exchanges including KuCoin and Gate.io.

Meanwhile, it was revealed Thursday that Jang Hyun-kook, the CEO of Wemade, has been residing in the luxury apartment Signiel on the company's dime.

In February, an affiliated company under Wemade secured the right to lease a unit at Signiel in Jamsil, eastern Seoul, on a deposit basis. The deposit was 12 billion won ($91.9 million), nearly 10 percent of the company’s operating revenue of 118.7 billion won in 2021.

During the delisting process, Wemix's market capitalization dropped by more than 380 billion won.

Wemade admitted Jang is residing at the flat for personal reasons, but said it is providing housing for Jang under company rules.