While Koreans enjoy many different types of soup at each meal, seolleongtang, a hearty bone broth soup, easily tops the list during the winter months.

Seolleongtang is made by simmering ox bones, specifically leg bones, with brisket and other cuts of beef for hours. The density of the smooth, milky soup depends on the quantity and types of the beef cuts that go into the broth making.

Those who love this hearty Korean beef soup cannot help but wonder, “What is the difference between seolleongtang and gomtang?”

Most people are not aware of the difference, and will have a hard time explaining it.

However, the general consensus is that seolleongtang use ox bones as the main ingredient, whereas gomtang typically use only meat, mainly brisket, for the broth. As a result, seolleongtang is milky, while gomtang is clear.

Another well-known beef soup is doganitang, which uses ox knee cartilage as the main ingredient. 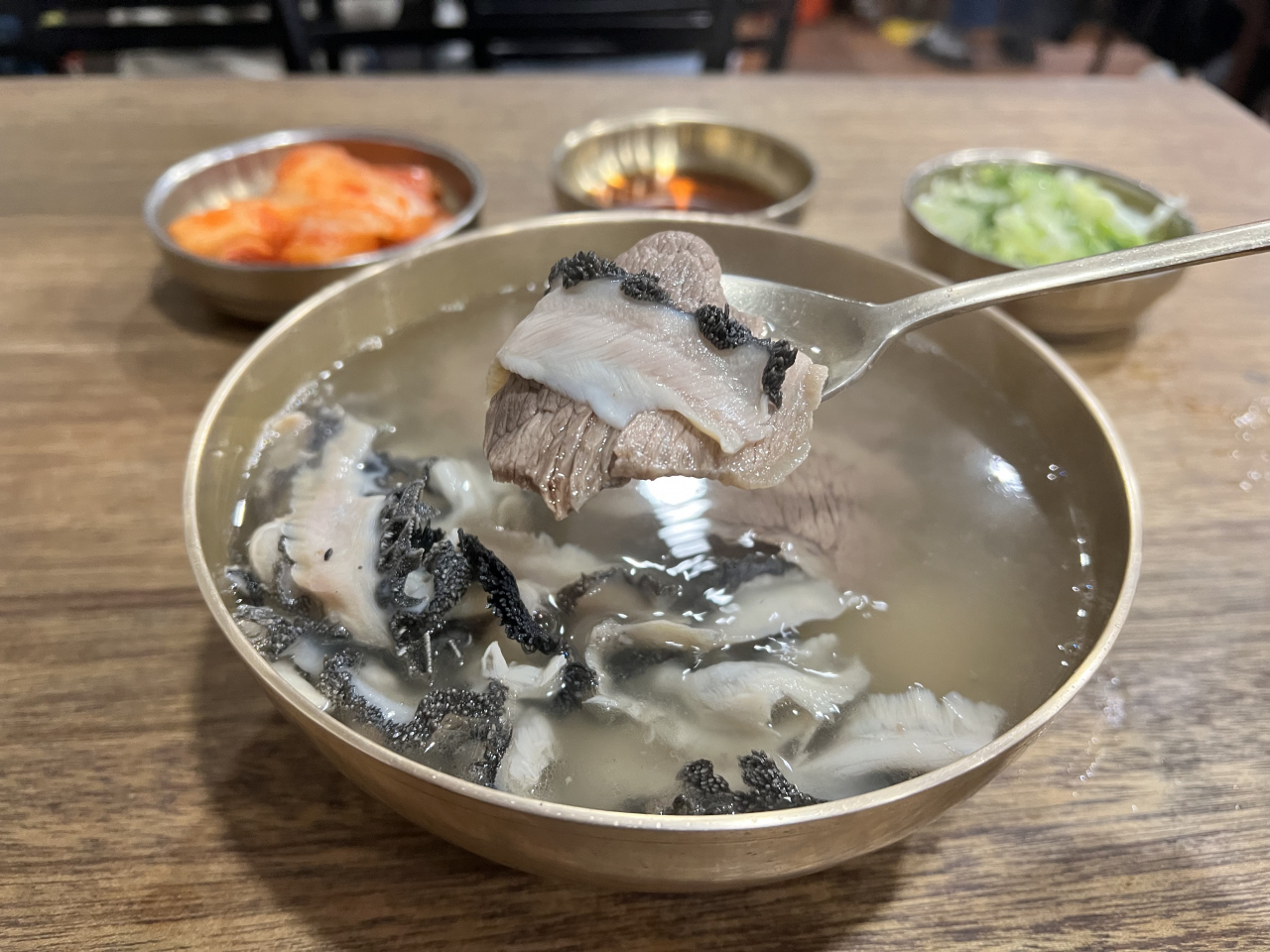 Located in a bustling Myeong-dong alley, Hadonggwan, established in 1939, has been on the Michelin Guide Seoul’s Bib Gourmand list three times in the last five years. The restaurant has maintained its business since 1939. While you may have to wait in a long line, once you are seated the food arrives at your table less than five minutes after your order is taken.

The soup is served in a large brass bowl and brought to the table mildly warm -- known to be the traditional way of serving gomtang. Gomtang is served with chopped green onions to add to your soup, kkakdugi (cubed radish kimchi) and soy sauce for dipping pieces of meat found inside the soup. Salt and pepper can be added to taste.

The scent and taste is very mild and clear, almost resembling that of a warm tea. Rice is already in the soup, so try a spoonful of rice with a slice of meat on top.

Also on the menu is teuk gomtang, or special gomtang (yeoldaseot gong), with beef intestines and tripe added to the regular gomtang. You can have more meat in your gomtang by ordering "seumu-gong" for 20,000 won.

The restaurant operates from 7 a.m. to 4 p.m., but may close earlier when it runs out of soup. 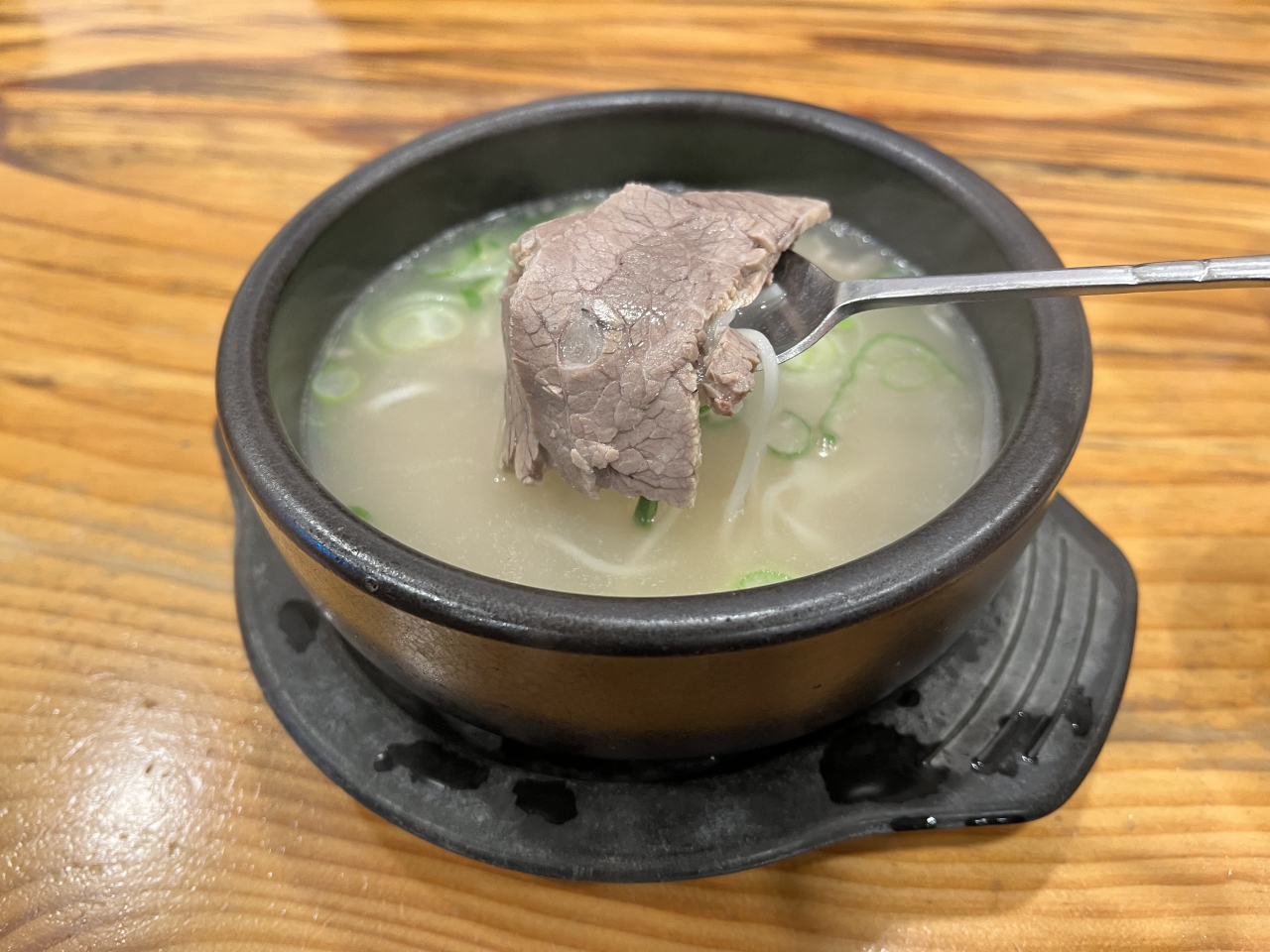 Mapo Yangji Seollongtang, a minute walk from Gongdeok Station Exit No. 9, has been at the same location for 45 years.

Although the two-story restaurant looks fairly new due to its recent renovation, many of the regulars are elderly couples or big families across three generations.

Seolleongtang here has thin noodles inside and a bowl of rice is served separately. One can either mix the rice into the soup or enjoy them separately. Slurp the noodles first and then try having it with some kkakdugi juice poured into the soup.

Seolleongtang here lands on the mildly sweet and savory side, and offers various layers of taste with each spoonful.

The soup is simmered for a minimum of 13 hours prior to the day it is served, ensuring a rich and thick seolleongtang, according to the restaurant's manager. 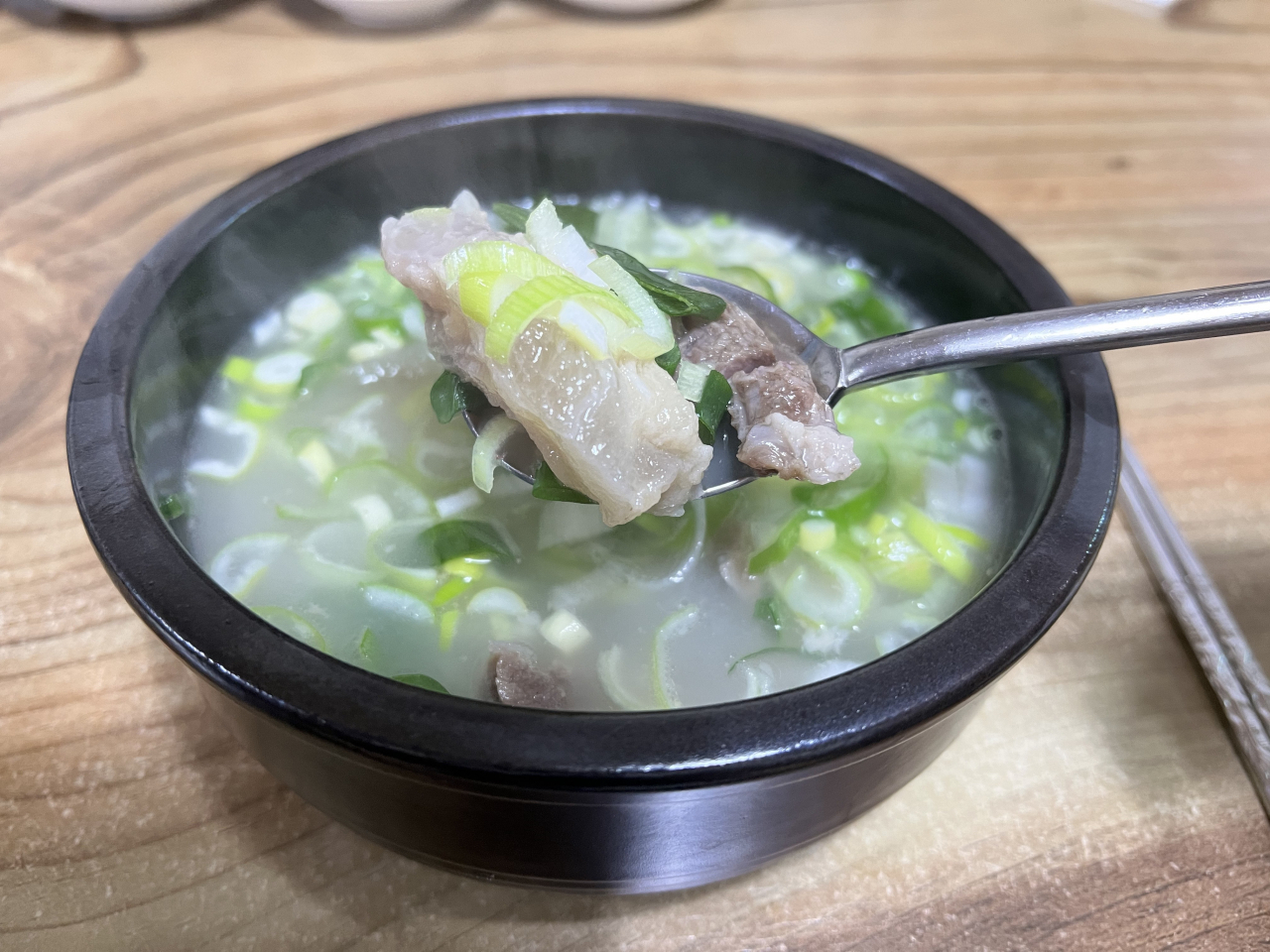 As the long lines prove, doganitang at Daseseongjib is well worth a try.

The restaurant has been serving the same menu for 60 years, selling doganitang and suyuk, or boiled ox knee cartilage slices.

A plate of suyuk is highly recommended for those who want to sample the texture of knee cartilage.

The chewy slices, which have a strong scent of ox meat, can be dipped in soy sauce.

Suyuk is a dish that calls for soju on the side. At Daeseongjib, more than half the tables have a bottle of soju even at 10 a.m.