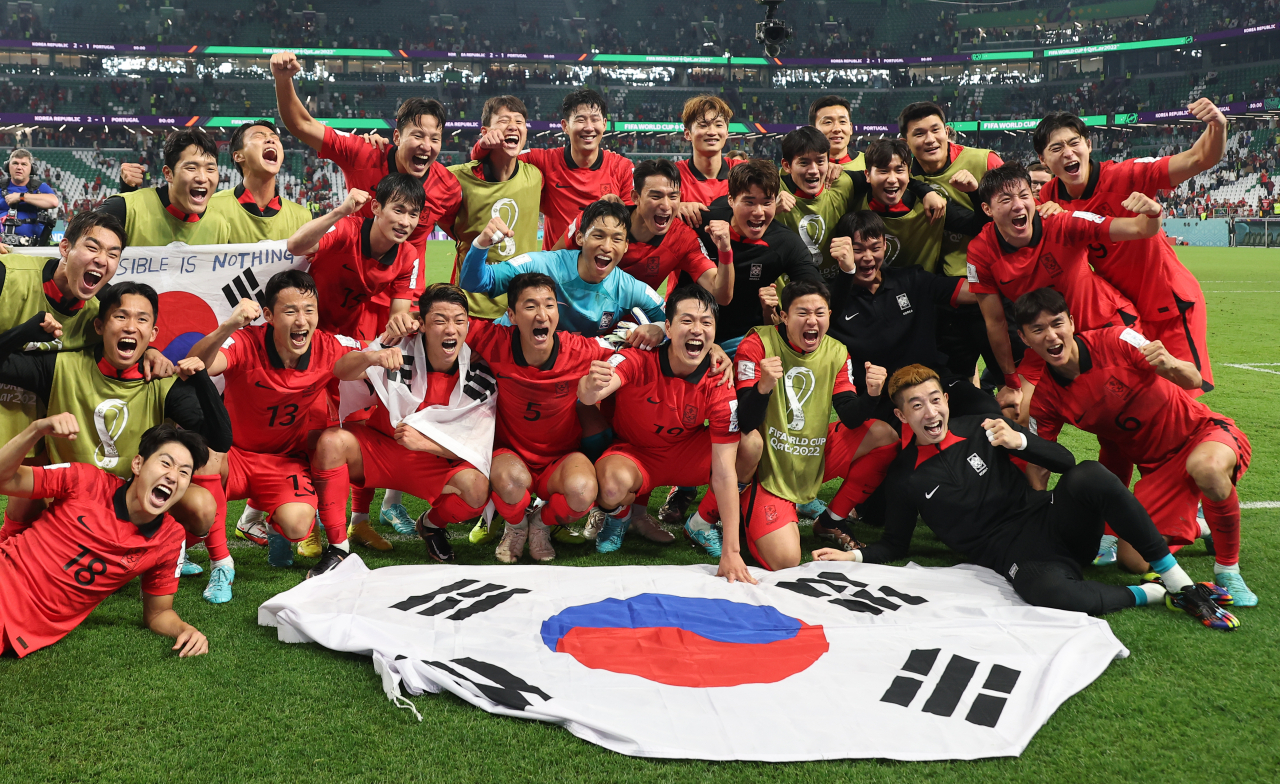 South Korean players celebrate their 2-1 victory over Portugal in the teams' Group H match that sent them to the round of 16 at the FIFA World Cup at Education City Stadium in Al Rayyan, west of Doha on Friday.

DOHA -- South Korea and Brazil, knockout round opponents at the ongoing FIFA World Cup, are keeping a low profile on Saturday, two days before their showdown in Qatar.

South Korea, moments after qualifying for the round of 16 with a 2-1 victory over Portugal Friday evening, announced they would have a rest day on Saturday. It is South Korea's second off day since their training camp opened in Doha on Nov. 14. The Taegeuk Warriors also did not train on Nov. 20, the opening day of the competition.

Meanwhile, Brazil will have a training session closed to the media Saturday afternoon in Doha, according to the official team schedule provided by FIFA. Teams may choose to open the first 15 minutes or the entirety of their training sessions to the media, or work out behind the closed gates.

Brazil, like South Korea, finished their group play Friday. They lost to Cameroon 1-0 but still won Group G to set up a date with South Korea, who finished runners-up to Portugal in Group H.

South Korea, world No. 28, have beaten top-ranked Brazil just once in seven previous meetings. Most recently, in a friendly match in June in Seoul, Brazil hammered South Korea 5-1. It was Brazil's biggest margin of victory over South Korea and the five goals were also the most Selecao have scored against South Korea.

Both teams have injuries issues, with Brazil a bit worse off with their superstar Neymar having only appeared in one match with an ankle injury.

Danilo and Alex Sandro have suffered an ankle and a hip injury, respectively, and sat out the Cameroon match. Alex Telles and Gabriel Jesus both complained of knee pain afterward, and Brazil confirmed Saturday evening that both players will miss the rest of the tournament.

Jesus has appeared in all three group matches but Brazil have no shortage of attacking talent to compensate for his loss. Telles' absence, however, leaves Sandro as the only other natural left back, and Sandro himself is banged up.

For South Korea, center back Kim Min-jae, who picked up a right calf injury in the opening match against Uruguay, missed the Portugal contest. He could be ready by Monday against Brazil after a few extra days of rest and treatment.

Midfielder Hwang Hee-chan, who missed the first two Korean matches, returned with a bang against Portugal, as he scored the thrilling winning goal during stoppage time of the second half. (Yonhap)