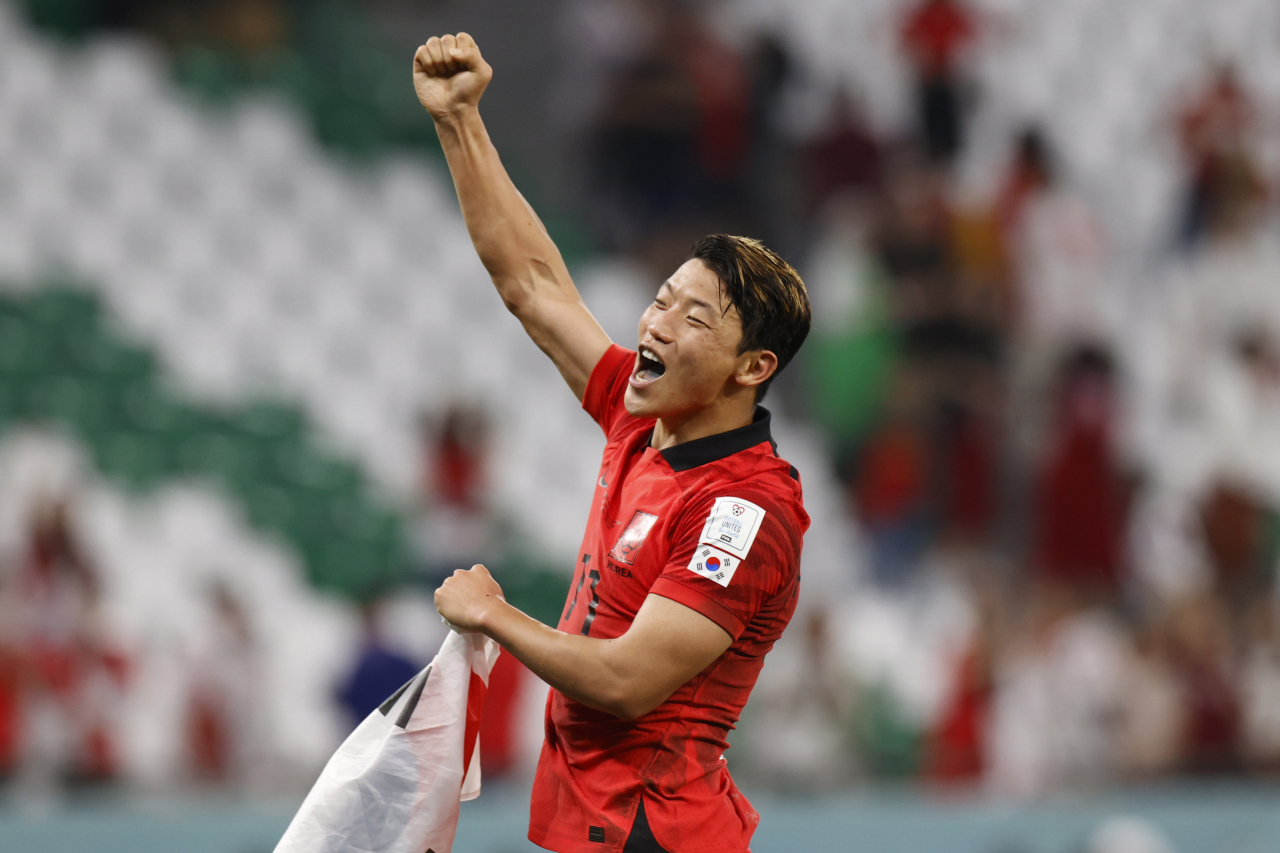 Having beaten steep odds to reach the knockout stage of the FIFA World Cup in Qatar, South Korea will be playing with house money when they take on Brazil in the round of 16 on Monday.

The win-or-go home match between 28th-ranked South Korea and world No. 1 Brazil kicks off at 10 p.m. Monday at Stadium 974 in Doha, or 4 a.m. Tuesday in South Korea.

Few pundits expected South Korea to come this far, especially not after they opened the competition with a goalless draw against Uruguay and a 3-2 loss to Ghana. A must-win match against Portugal awaited South Korea on Friday, and the Taegeuk Warriors also needed help from other teams in the group to advance.

The stars aligned perfectly for South Korea, who defeated Portugal 2-1 on a last-gasp goal by Hwang Hee-chan. Uruguay defeated Ghana 2-0 to help South Korea, who ended up tied with Uruguay in goal difference but beat them in the next tiebreak category, goals scored, by 4-2. One more goal by Uruguay would have sent South Korea home.

Some lucky bounces along the way also conspired to put South Korea in the knockout round. In that opening draw on Nov. 24, Uruguay struck the goal post twice. The first South Korean goal against Portugal, scored by Kim Young-gwon, came after a South Korean corner hit the back of Portugal captain Cristiano Ronaldo and landed at Kim's feet.

South Korea will face their most difficult test yet, with Brazil going for their sixth World Cup title.

Selecao haven't exactly set Qatar on fire, though, scoring just three goals in three group matches and losing to Cameroon 1-0 to close out Group G play. They still won the group with six points, though only by a slim margin in goal difference over Switzerland, who also had six points.

Neymar, one of football's biggest stars, has missed the past two matches with an ankle injury he picked up in the opener. Neymar is reportedly ready to train with the ball on Saturday and could be available against South Korea.

Brazil beat South Korea 5-1 in their most recent meeting, a friendly match in June in Seoul. South Korea refused to back down against world No. 1 and stuck to their signature, buildup style of football. But they struggled against high pressing applied by Brazil.

South Korea did not have the services of center back Kim Min-jae, who was injured at the time. He is South Korea's best defender and also the one able to make quick passes to relieve pressure or dribble his way out of trouble.

Kim could have made a difference in that June match. But he has been hobbled by a right calf injury in Qatar and did not play against Portugal.

Whether Kim is available or not, expect much of the same approach by South Korea against Brazil this time, too. Head coach Paulo Bento has yet to deviate from the buildup brand in Qatar.

Along the way, he has silenced critics who doubted that his tactics, based on the philosophy of winning the possession battle, would work against teams that could dominate the ball against South Korea in the World Cup.

South Korean players have said throughout the World Cup here that they always believed Bento's system would work even against favored opponents. And the thrilling victory over Portugal has given a shot of confidence to the team that already had plenty of it.

"Just because we play Brazil, it won't mean we will be just happy to be there in the knockouts," said Hwang Hee-chan, who scored the winner against Portugal. "We want to play well and win for our fans."