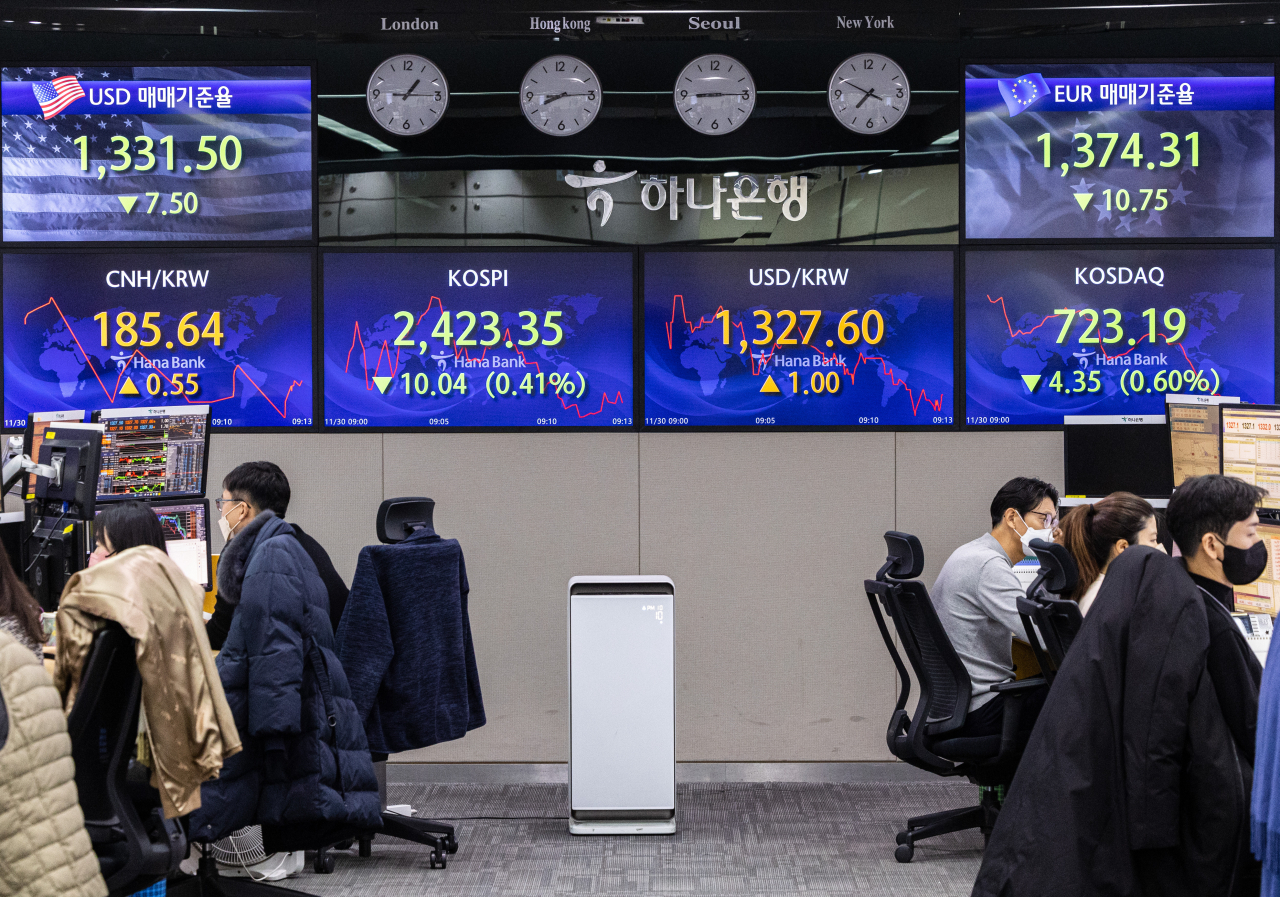 An electronic board showing the Korea Composite Stock Price Index at a dealing room of the Hana Bank headquarters in Seoul on Wednesday. (Yonhap)

Foreign investors purchased a net of more than 6 trillion won ($4.5 billion) worth of shares on South Korea's stock market in October and November as they picked up chips and other related tech shares, the Korea Exchange's data showed Wednesday.

According to the securities exchange operator, foreign investors purchased net 6.78 trillion-won worth of shares on the benchmark Kospi from Oct. 1 to Nov. 29, while they sold 30 billion won on Kosdaq.

The Kospi purchase was heavily focused on chipmakers, battery and related tech firms, which are big players in the local stock market.

In October, foreign holdings of Kospi surpassed 31 percent. It was the first time in five months for the figure to make the recovery since May. However, the figure eventually fell to 30.69 percent in November.

For Kosdaq, foreign holdings rose to 8.9 percent in October, up 0.06 percentage point from September, before it slightly fell to 8.74 percent in November.

“With China possibly easing up on its COVID restrictions, foreign buyers are anticipating on growth of related markets. If the Chinese market recovers, so does the Korean market,” Seo Sang-young, an analyst at Mirae Asset Securities, said.

China’s State Council held a briefing Tuesday saying it will increase vaccination rate of the elderly, a move interpreted to be a sign of reopening. Though the authorities did not explicitly mention an ease of pandemic-related restrictions, expectations are growing.

“Also, sales of Korean tech firms in the US went up due to seasonal events such as Black Friday and Cyber Monday,” Seo said. “South Korean government announcing its support on liquidity also had its effect.”

With expectations on China's reopening and growth, shares of Korean cosmetics companies -- an area heavily reliant on the Chinese market -- also went up, such as Amore Pacific, LG H&H and Hankook Cosmetics.