It was announced Sunday evening that Kim Min-jae, the center back for the South Korean national soccer team, is yet undecided on whether he will play in Monday’s Group H match against Ghana in the FIFA World Qatar 2022.

Koreans’ manager Paulo Bento told reporters that clearing the Napoli defender for playing will be a game time decision, prior to the kick off at Education City Stadium in Al Rayyan, Qatar, at 4 p.m. local time, 10 p.m., Korean time.

“Tomorrow, in the morning, we will decide if he’s going to start the game or not,” he told reporters in the Sunday’s press conference.

Kim injured his leg during Thursday’s match against Uruguay, when he slipped while chasing Darwin Nunez of the opposing team. Kim was visibly shaken by the injury and although he came back to play the remainder of the game, he missed out the training sessions on Friday and Saturday before eventually rejoining the team Sunday.

Kim, however, was riding a stationary bicycle and not training with the team during the 15 minutes of the practice that was open to media. 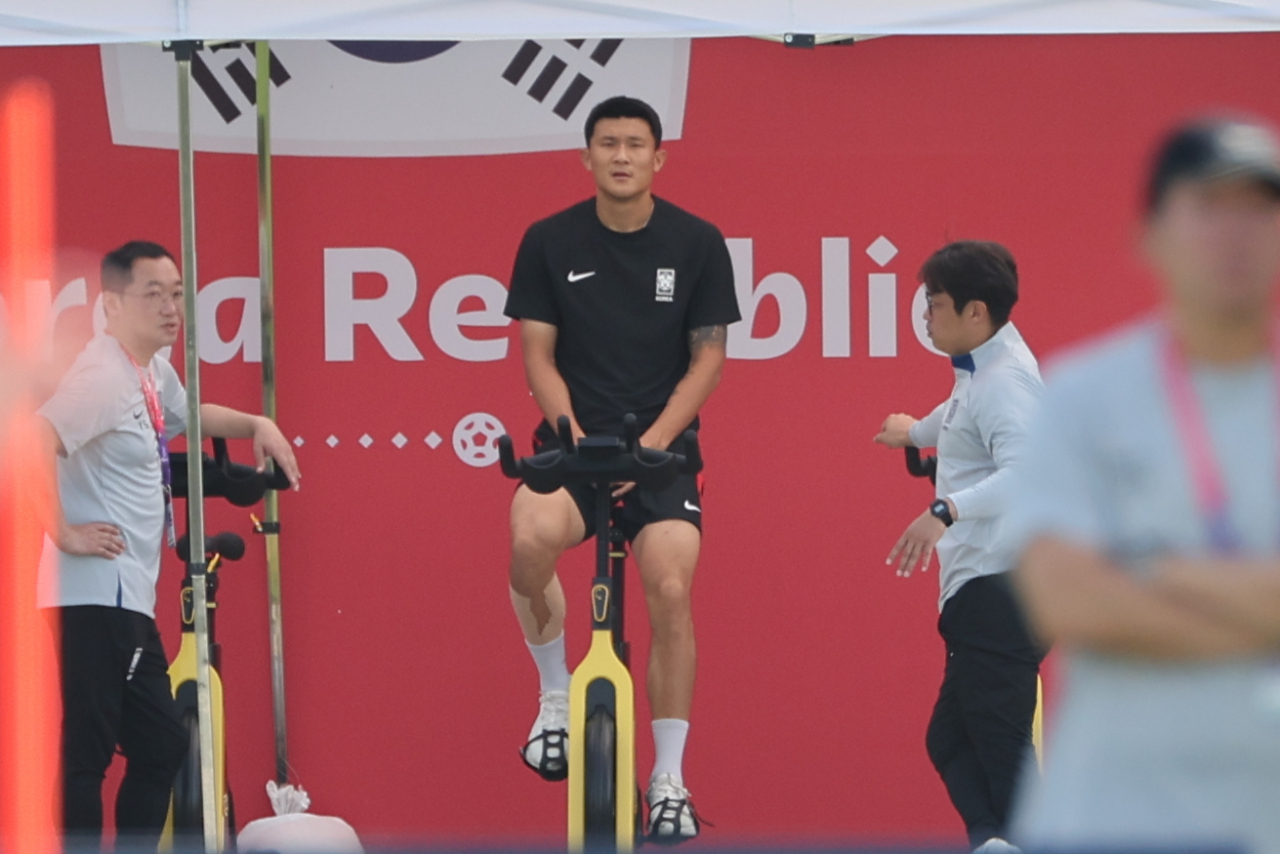 Kim Min-jae rides a stationary bicycle during South Korean national team's practice at the Al Egla Training Facility in Doha on Sunday, a day before the Group H match against Ghana. (Yonhap)

Kim’s absence, if decided, will deal a huge blow for the South Korean team. The defender just had a break-out season with his Serie A team Napoli -- having won the player of the month honors for October -- and is an integral player in the Koreans’ defense.

Standing 190 centimeters tall and weighing 88 kilograms, he is the biggest player on the squad except for bench goalkeeper Song Bum-keun. In a game against the favored Uruguay squad, he hassled the opposing teams and played a crucial role in the teams’ 0-0 draw.

If Kim sits out the game against Ghana, South Korea might have a tough time against the Black Stars. While the Ghanans had some issues like abrupt changes to the squad and is outranked by South Korea 28 to 61, they handed the Koreans a bitter 4-0 defeat when they played each other in 2014.

South Korea has faced African teams three times in the World Cup, beating Togo in 2006, tying with Nigeria in 2010, and defeating Algeria in 2014.

But Ghana is the lowest ranked team out of the four in the group. According to the betting odds in the US sports betting company Caesars Sportsbook, South Korea is listed as a +150 favorite (bet 100 to win $150), while Ghana is a +210 underdog.

While South Korea has been generally regarded as the favorite against Ghana, going into the match against the team’s best defender makes it a completely different story. As such, Koreans are anxiously waiting for the team’s announcement that will be made later in the day.