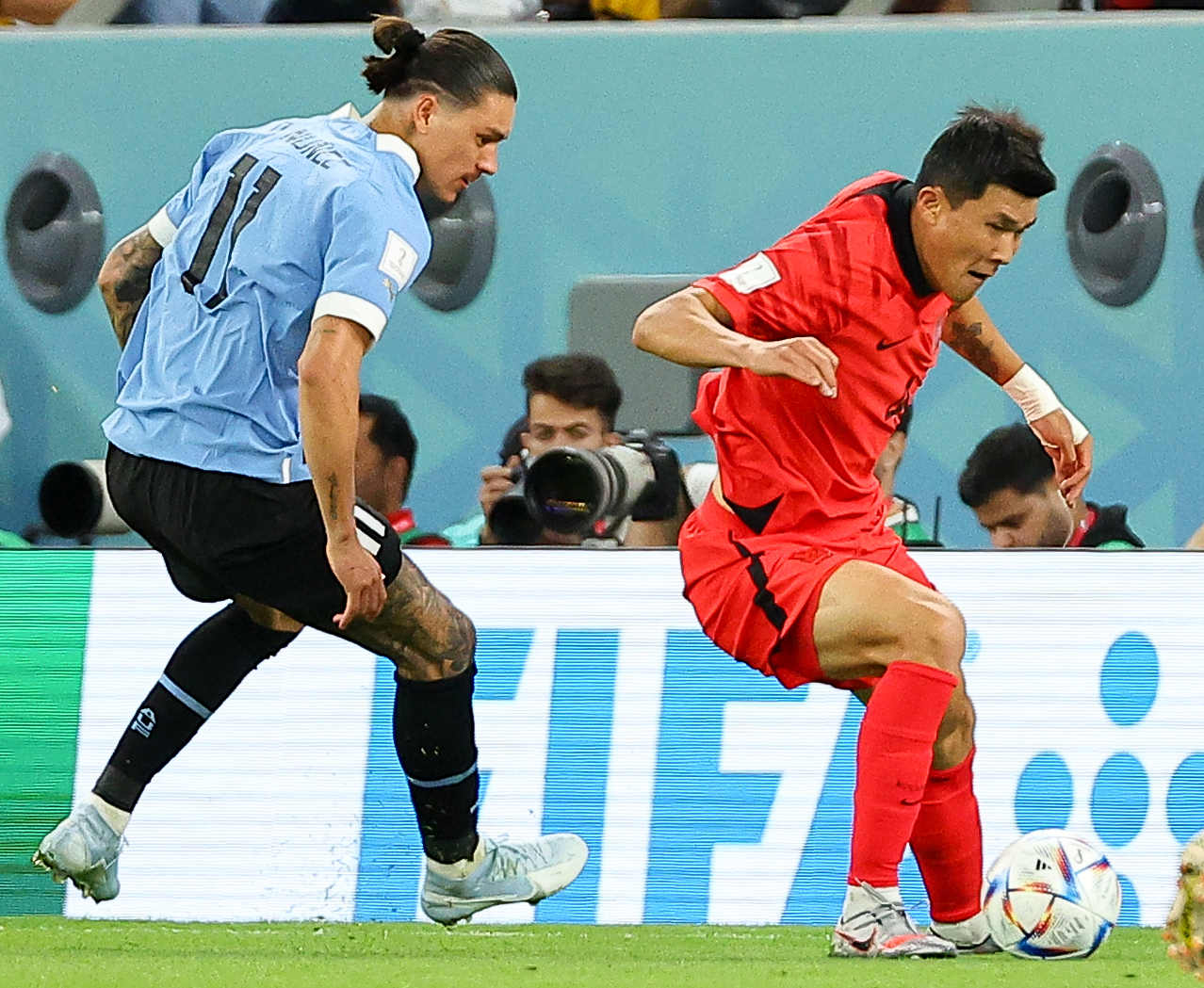 Kim Min-jae of South Korea (right) and Darwin Nunez of Uruguay battle for the ball during their teams' Group H match at the FIFA World Cup at Education City Stadium in Al Rayyan, west of Doha, last Thursday. (Yonhap)

DOHA -- First, it was their captain and best offensive player, Son Heung-min. Now, South Korea's best defender, Kim Min-jae, is down with an injury and is a question mark against Ghana later Monday.

Just about the worst nightmare scenario is playing out for the Taegeuk Warriors at this year's FIFA World Cup in Qatar.

And if Kim can't go against Ghana, South Korea, with little depth behind the Napoli defensive stalwart, will have major problems.

Son Heung-min bounced back in time from his facial fractures to play in South Korea's first Group H match against Uruguay last Thursday in a protective mask. But during the second half of the same game, Kim picked up a right calf muscle injury while chasing down forward Darwin Nunez.

Kim stayed on to play the rest of the match and said afterward he didn't think the injury was all that serious. However, Kim ended up missing two consecutive days of training, and on Sunday, he was limited to riding a stationary bicycle during the first 15 minutes of the session that's open to the media.

Kim, the Serie A Player of the Month for September, is perhaps the most irreplaceable player for South Korea, even more so than Son, given Kim's unique skill set as a defender.

In Bento's typical back-four formation, Kim is South Korea's best right-footed center back, with Cho Yu-min, who has only four caps, being the only other right-footed option in that position.

Left-footed Kwon Kyung-won, owner of 28 caps, has previously played center back alongside Kim's usual partner, Kim Young-gwon, but Kwon has not been as effective playing on the right side. Bento prefers to have right-footed defenders on the same-footed side, anyway.

If push comes to shove, Bento will likely reunite Kwon with Kim Young-gwon, based on their prior experience, rather than roll the dice with Cho in a virtual must-win game.

Bento may also opt for a back-three formation and line up Kwon, Kim Young-gwon and Cho from left to right. The trio played together against Iceland on Nov. 11, South Korea's final friendly match before the World Cup.

Kim Min-jae brings a rare combination of physicality, speed and passing vision to his position. He has played in 38 matches under Bento, dating back to September 2018, and South Korea have won 24 of them, with 11 draws and only three losses. And the 38 matches and 3,390 minutes by Kim are both the second-highest totals for a South Korean player on Bento's watch.

After watching Ghana lose to Portugal 3-2, South Korean players have talked confidently about exploiting the space behind Ghana's defense. However, if Kim Min-jae misses Monday's match, then his teammates will have to worry about the space behind their own defense.

Once Kim was slowed by the injury in the second half against Uruguay, it affected South Korea's overall play and sent Bento scrambling to make adjustments accordingly.

"(Kim's injury) impacted our attacking because it didn't allow us to carry on mounting attacks in the way we had been doing because of the issues he was facing," Bento said. "At the same time, we had more issues in bringing the defense further up as we did in the first half, also because of these issues. We opted to play with a deeper line and the line." (Yonhap)