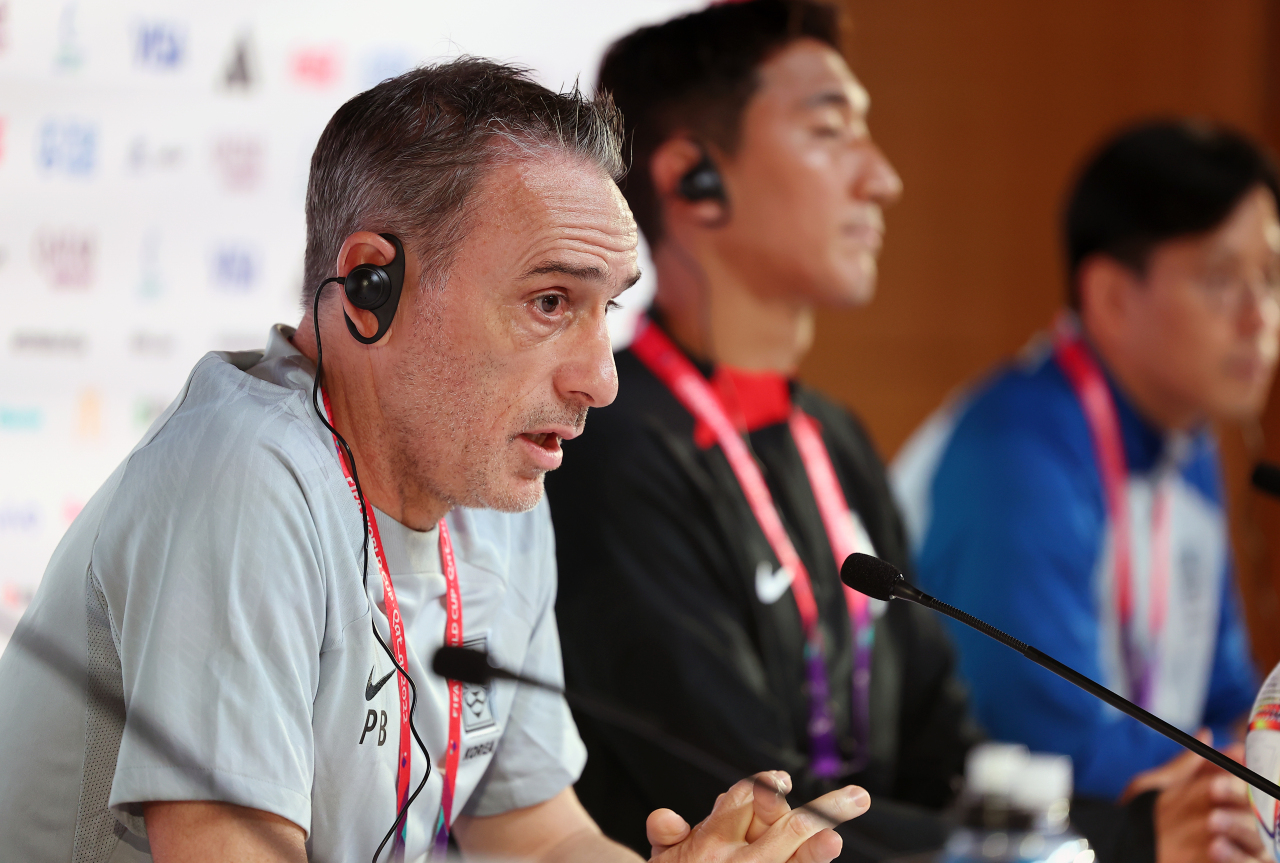 South Korea head coach Paulo Bento speaks at a press conference ahead of Group H match against Uruguay at the FIFA World Cup at the Main Media Centre in Al Rayyan, west of Doha, on Nov. 23, 2022. (Yonhap)
AL RAYYAN, Qatar -- Aware of South Korea's checkered history at the FIFA World Cup, South Korea head coach Paulo Bento said Wednesday he doesn't think his players should put any burden on their own shoulders.

Bento and his 26-man squad will open their 2022 World Cup against Uruguay at 4 p.m. Thursday at Education City Stadium in Al Rayyan, just west of Doha. Against the 14th-ranked Uruguay, South Korea, at No. 28, will be the underdogs.

At his prematch press conference at the Main Media Centre, Bento said the pressure will be on the other team, since South Korea haven't always been successful in the quadrennial tournament and aren't expected to do much damage this time, either.

South Korea have been to the knockout stages only twice before, going to the semifinals in 2002 as co-hosts with Japan and to the round of 16 in 2010.

"If this was a team going to the knockouts every time, it'd be a different story. I do not see any reason for them to have to have pressure on their shoulders," Bento said of his players. "I do not believe this is the burden they have. I am sure we'll be able to compete in the very best manner possible in each of the three matches during the group stage."

Bento, the longest-serving head coach in South Korean football history with over four years under his belt, said his team had a "slightly less difficult" time in qualifying for this World Cup than previous ones, and he was "very happy" to have reached the goal of playing in the big event.

"I feel very proud to represent Korea at this competition," the Portuguese coach said. "I believe it has been and is a long journey, in which I believe we were able to reach our goal in a straightforward manner."

Bento said he reserved a great deal of respect for Uruguay for being "a high quality" foe with great technical skills.

"The team is extremely well organized in every aspect of the game," he said. "It's a thirsty team. We will need to be up to our game so that we can be competitive with a team of such quality and experience." (Yonhap)