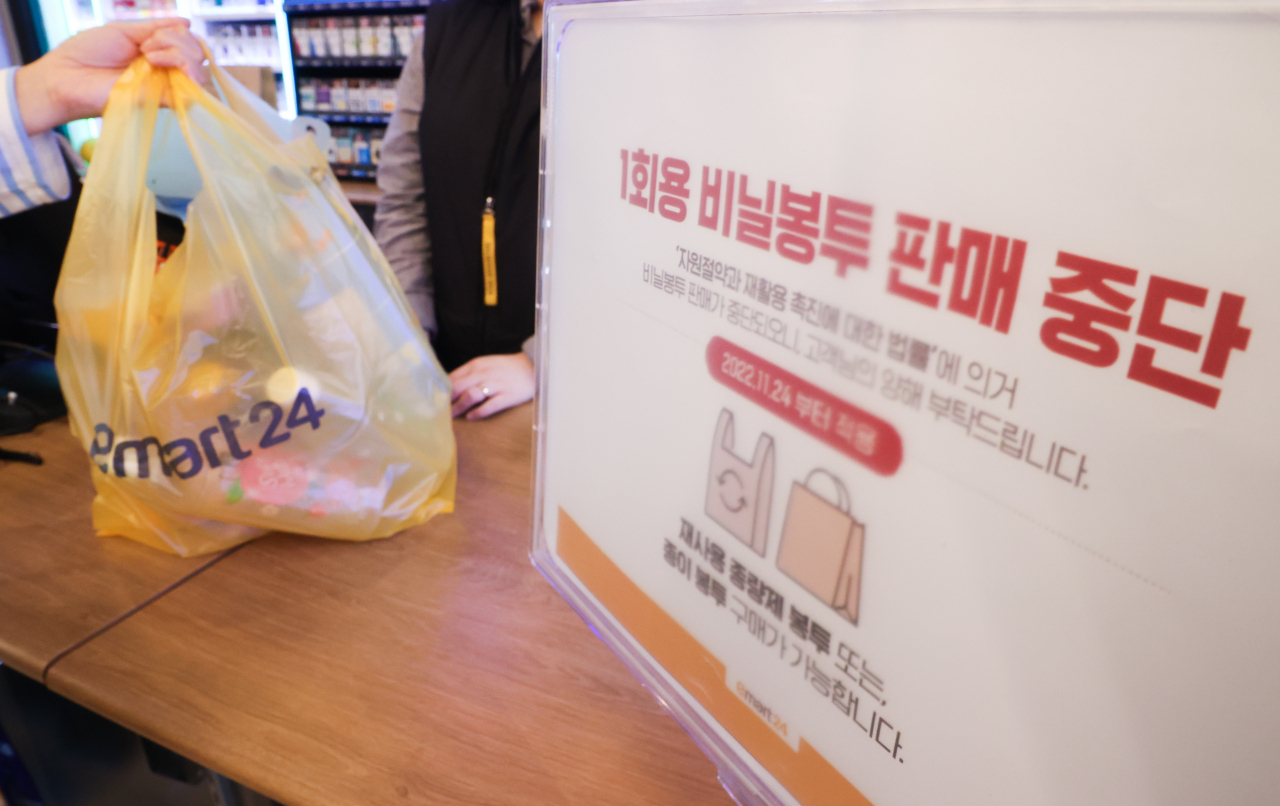 This photo taken on Nov. 1 at a convenience store in Seoul shows a notice which informs the sales of single-use plastic bags are banned from Thursday. (Yonhap)

From Thursday, the government will expand its ban on single-use merchandise with a yearlong grace period, adding plastic bags, straws, stir sticks and more to its list of restricted items.

Though convenience stores sold plastic bags to customers at a price of 100 won ($0.07) or more before, from Thursday they can only sell multiuse bags instead.

Department stores and large businesses will not be allowed to give out plastic covers for wet umbrellas to prevent water dripping on the floor. Audience members will be restricted from using plastic goods to cheer at sports facilities.

The restrictions, based on a revision of the Act on the Promotion of Saving and Recycling of Resources made in June 2021, were to be enacted from Thursday with penalties. The ministry, however, made the decision to ease in the restrictions with a yearlong grace period, just some 20 days before they were brought into action.

Under the grace period, though businesses were to face a fine up to 3 million won when violating the rules, no fine will be imposed.

Environmental activist groups are concerned the ministry's grace period on the new measures may lead to confusion, however, while casting doubt on the government’s willingness to actually combat waste pollution.

“Going back on the decision by giving a grace period on the restrictions make the public and related businesses more confused,” said Kim Na-ra, a plastic campaigner at Greenpeace.

“If the government has properly realized the seriousness of plastic pollution, it would not have given a grace period on the new measures,” Kim said.

Some business owners are confused by the government going back and forth over restriction measures regarding single-use products.

Earlier this year, the ministry had postponed the introduction of a nationwide deposit system for single-use plastic cups, and later announced the system will have a pilot run in Sejong City and Jeju Island from December.

"I know that single-use goods are bad for the environment. But when it comes to running a business, plastic goods are much more convenient," said a cafe owner in Eunpyeong-gu, Seoul.

“I am both disappointed and relieved there will be a grace period for the new restrictions. Doing the right thing is one thing, but reality is different,” she said.