[ The Korea Herald – Send E-mail ]
Street cheering to be held in Seoul amid woes over large-scale gatherings after Itaewon crowd crush
South Korea's public World Cup viewing parties have been highly anticipated celebrations for decades, but this year the decision whether to host such fan gatherings has been complicated by recent events.
By Shim Woo-hyun
Published : Nov 22, 2022 - 15:52
Updated : Nov 22, 2022 - 19:20 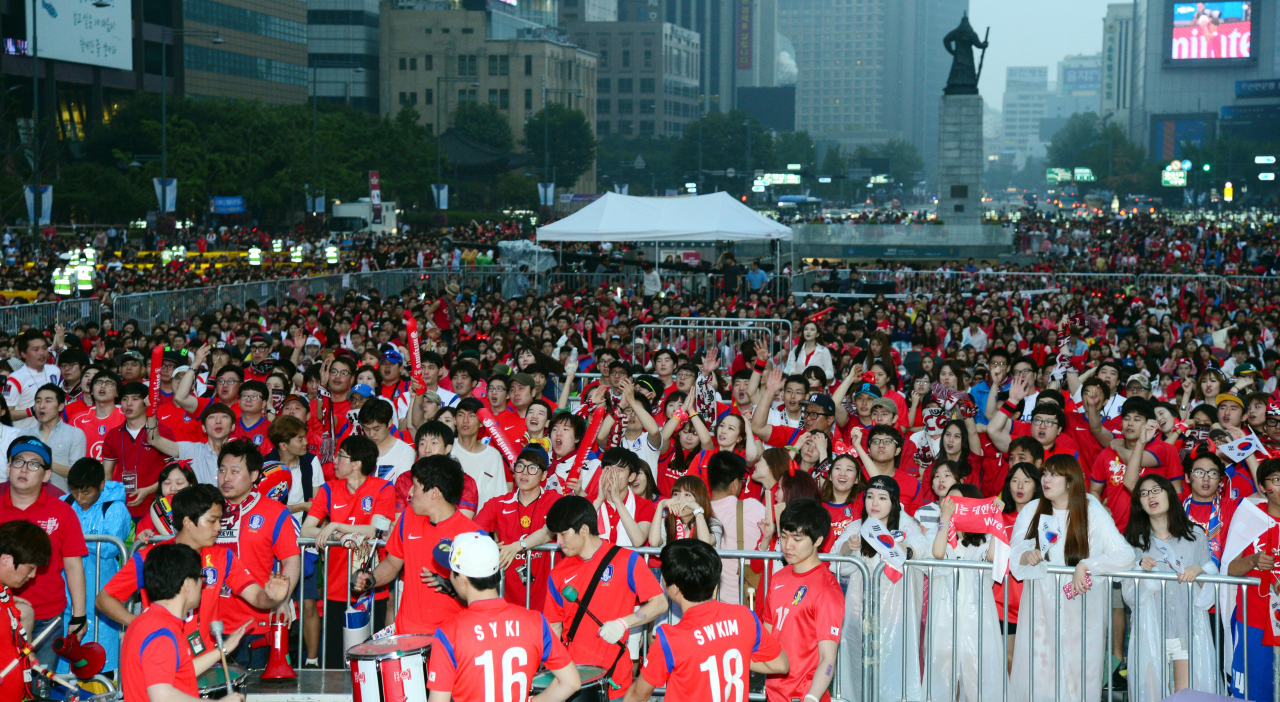 The Seoul city government on Tuesday evening announced that the operation committee of Gwanghwamun Square came to such conclusion after a meeting that started at 5 p.m.

The decision came after planned street cheering events in Gwanghwamun Square were taken into serious consideration this year, following the deadly crowd crush that took away the lives of more than 150 people.

Street rallies during the World Cup have been considered special events over the past couple of decades, particularly since the 2002 Korea-Japan World Cup. South Korea’s team played six games during that tournament, and millions of people poured into the streets to watch the matches together and cheer on the team. The events, held every four years since, are arguably the biggest celebrations for local soccer fans.

However, the situation is different this year as the World Cup in Qatar kicked off less than a month after the crowd crush. The country observed a weeklong period of national mourning for the victims earlier this month, and the Korea Football Association in early November released a statement saying it had decided to cancel all street events in solidarity with the victims of the crowd crush.

People also have mixed reactions over whether it is appropriate to gather to celebrate so soon after the tragedy as some citizens remain concerned about large-scale gatherings. "It has been less than a month since the tragic accident, and I feel like we still need a little more time to express our condolences to the victims," said a 30-year-old Seoul resident, who requested to be identified by her surname Cho. "It is highly likely that many people would come out to the streets, including teenagers, and I am concerned about whether similar accidents will unfold."

A 35-year-old resident, who requested anonymity, said, "It seems too early to hold cheering events since the exact cause of the disaster and who is responsible have not been fully found yet."

Yet some say otherwise.

"Given that public viewing events take place in a large open space -- unlike Itaewon, where the accident unfolded in a narrow alley -- it might be okay," said a 34-years-old Gyeonggi Province resident who requested to be identified as his surname Ryu. He also noted that people were attentive to safety protocols during street cheering events during previous World Cups.

“Whether to join street rallies is completely up to each individual,” said Chung, 40, from Suwon.

While the public has feels mixed regarding the street events for the World Cup, the Red Devils, the official supporters club of the Korean national soccer team, requested approval to hold the gatherings from the Seoul city government.

On Saturday, the Red Devils Seoul branch announced that it had decided to hold the street rallies, reversing its initial announcement. The Red Devils said they had submitted an application on Thursday to the Seoul Metropolitan Government to use Gwanghwamun Square on three separate occasions when the national team is scheduled to play.

The supporters club said it “originally thought that it would be inappropriate to organize such events where many people would gather, before grief over the tragedy in Itaewon is over.” The supporters group, however, said it reversed course after a series of meetings on the idea that “it is rather right to give true comfort and express our condolences in our own way.“

The district office of Jongno-gu, which said the Red Devils' plan requires stronger safety measures, turned down the application on Monday, but granted approval on Tuesday afternoon. After reviewing the original plan, the district office said the supporters club should double the number of safety guards and secure paths for emergency vehicles.

Under the current law, an event with more than 1,000 participants has to receive permission from the relevant district office regarding safety measures.

With the Jongno District Office's approval, the Seoul city government made the final call on whether to allow the massive street events during the tournament.