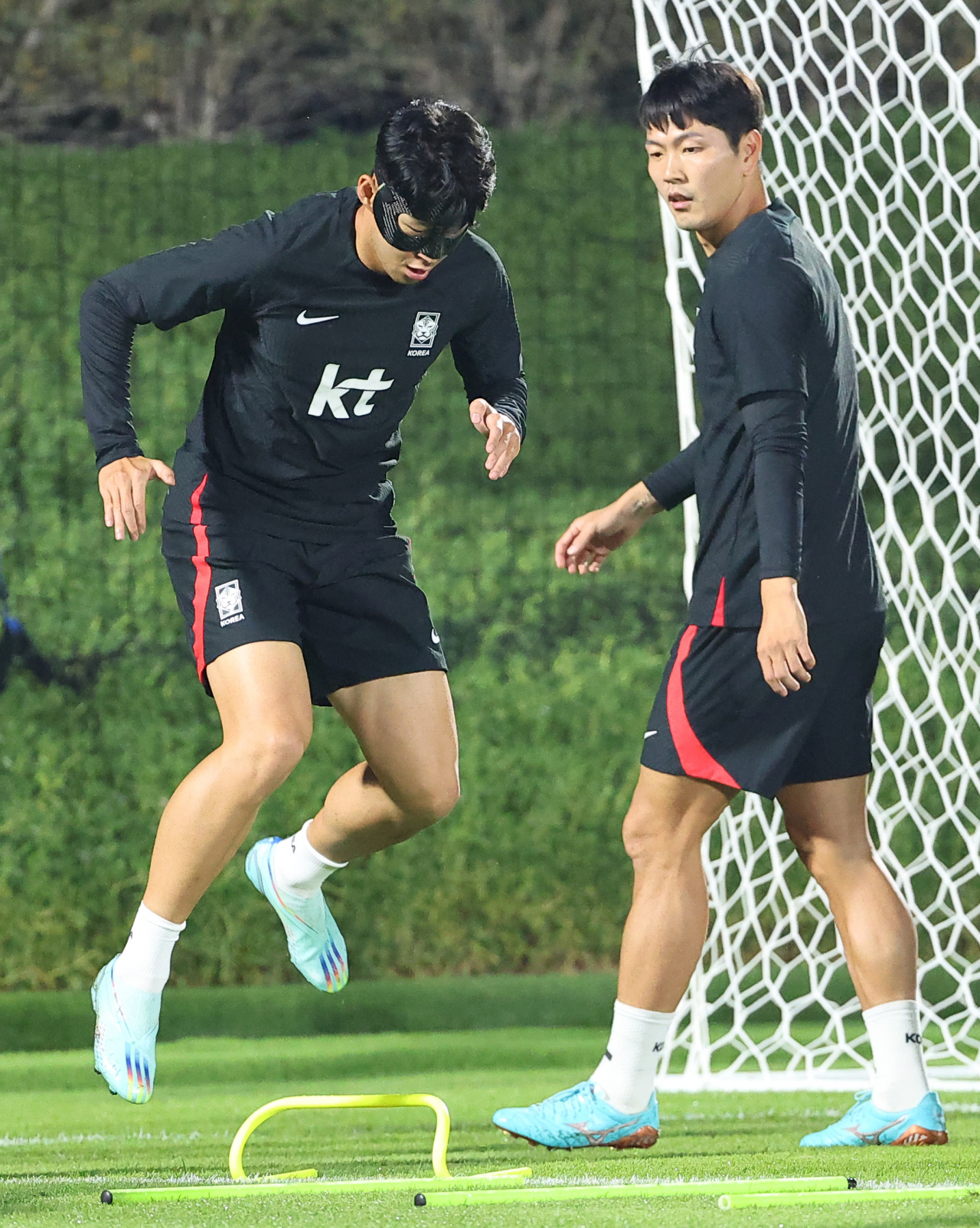 on Heung-min of South Korea trains for the FIFA World Cup at Al Egla Training Site in Doha, last Saturday.

DOHA -- As South Korea prepare to kick off their 2022 FIFA World Cup against Uruguay on Thursday, all eyes will be on their captain, Son Heung-min, or, more specifically, his face.

The Tottenham Hotspur talisman has been training with a protective mask covering his injured face in Qatar. He suffered multiple fractures around his left eye in a collision during a match on Nov. 1 and underwent surgery three days later. The opening Group H match between South Korea and Uruguay will be played exactly 20 days after the procedure, a 4 p.m. kickoff Thursday at Education City Stadium in Al Rayyan, just west of Doha. It's 10 p.m. Thursday in South Korea.

The availability of Son for this match, and beyond, has been subject to intense speculation. In his only media availability so far in Qatar last Wednesday, Son said he wasn't yet prepared to declare his match readiness and that he would only take it "step by step" to see how well he progresses.

Son was held out of team-wide strategic drills through Friday, instead working out with other nicked-up players on the side. Head coach Paulo Bento then placed a gag order on Son's status in training starting Saturday, keeping opponents in the dark about his best player's health and availability.

But there is no secret that Son, even with his health compromised, is still the one South Korean player that opposing defenders will key in on.

The math is simple. When Son draws multiple defenders to himself, it creates extra space for other attackers to exploit. Son has the vision and skills to find open teammates, though he is also talented enough to create his own chance in such situations.

In that sense, the recent struggles of Hwang Ui-jo, who has been South Korea's go-to striker for the last few years, are a source of concern. Since leaving France to join Olympiacos FC in Greece on a loan deal from Nottingham Forest, Hwang has not scored in 11 matches.

Bento has previously said he wasn't worried about Hwang's seasonlong slump because of his strong track record. Hwang remains South Korea's top scorer during Bento's regime, which began in September 2018, with 15.

South Korea's defenders will also have their hands full against Uruguay, who will bring an intriguing blend of veteran savvy and youthful exuberance.

Up front, the seasoned duo of Luis Suarez and Edinson Cavani are back. They have combined for 126 goals in 267 international appearances. And there's the 23-year-old striker Darwin Nunez, about to make his World Cup debut after leading the top Portuguese league in goals last season and netting nine goals in 18 matches for his new club, Liverpool, this season.

For South Korea, center back Kim Min-jae must maintain his strong form in his first season with Napoli if his national team are to keep Uruguay in check. The man fans like to call "Monster" offers an impressive mix of strength, speed and playmaking chops from the back, an ideal fit in Bento's buildup schemes.

Kim will obviously need help defending, but fullback positions on both sides are the most glaring holes for South Korea.

Bento has cycled through a number of players on the right side, with no clear-cut favorite having emerged. Offensive-minded Yoon Jong-gyu had some opportunities there lately, but he has been dealing with some hamstring problems in Qatar.

On the left side, Kim Jin-su would have been the undisputed top option, except for hamstring issues of his own. Kim did not train with South Korea during their last camp at home from late October to early November and has been a limited participant in sessions in Doha.

Bento only has one other left-footed left fullback material in Hong Chul, while right-footed Kim Moon-hwan has played on his off side before.

Without strong options at fullbacks, Bento may opt for a back-three formation and line up three center backs, to be flanked by natural midfielders as wingbacks.

Uruguay should also have an edge over South Korea in the middle, with Son's Tottenham teammate, Rodrigo Bentancur, and Real Madrid star Federico Valverde in the mix.

In goal, Kim Seung-gyu has been the first-choice man for Bento in recent matches and should get the start Thursday. Sergio Rochet, who has emerged as the top man for Uruguay over veteran Fernando Muslera, will likely be Kim's counterpart.