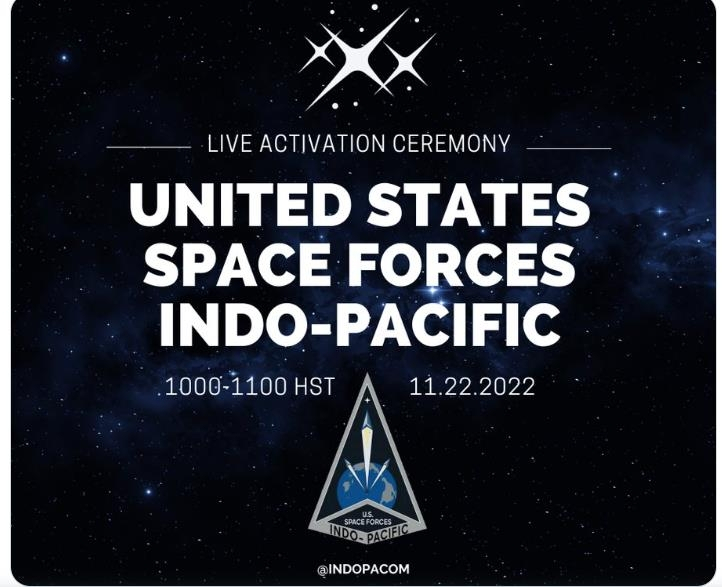 The image shows the scheduled launch of a new US Space Force Indo-Pacific Command. (US Indo-Pacific's Twitter)

WASHINGTON -- The US Space Force is setting up a new component command in the Indo-Pacific, US Indo-Pacific Command said Monday, in a move believed to be aimed at enhancing US defense capabilities against ballistic missile threats posed mainly by China but also North Korea.

In a message posted on its Twitter account, INDOPACOM said the new US Space Force Indo-Pacific Command will be launched on Tuesday.

It will be the first Space Force command to be established under any combatant command such as INDOPACOM.

The Space Force was established in December 2019, with a mission to "protect the interests of the United States in space, deter aggression in, from and to space, and conduct space operations."

Threats from space include intercontinental ballistic missiles and hypersonic missiles, according to those familiar with the issue.

North Korea conducted a record 63 ballistic missile tests this year, including eight ICBM tests, according to US Ambassador to the United Nations Linda Thomas-Greenfield.

The new Space Force Command, once established, is expected to help improve US abilities to detect and intercept ballistic missiles originating from countries in the region.

Space Force Lt. Gen. B. Chance Saltzman, deputy chief for operations, cyber and nuclear, was earlier quoted as saying that the Space Force will seek to establish component commands at combatant commands where the threat to the US homeland is most acute, such as INDOPACOM, US European Command and US Central Command. (Yonhap)