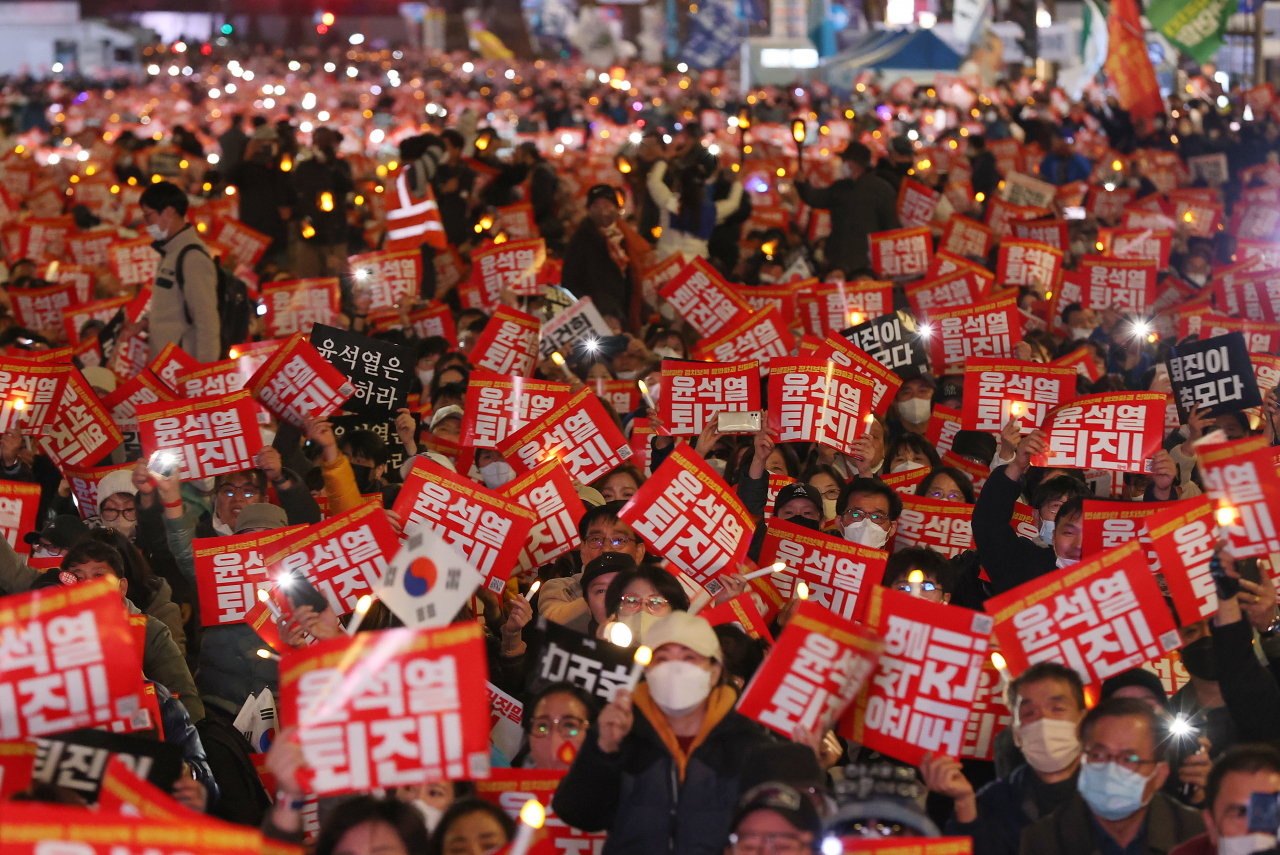 A candlelight demonstration led by a local liberal group is held to demand the resignation of the Yoon Suk-yeol government on Saturday afternoon near Sungnyemun Gate in Jung-gu, central Seoul. (Yonhap)

The event, hosted by the local activist group Candlelight Movement, began Saturday at 4 p.m. around Sungnyemun in central Seoul. Participants chanted slogans denouncing the government while holding signs that read "The person in charge of the Itaewon disaster is Yoon Suk-yeol," and "Independent counsel probe for Kim Keon-hee." The group estimated the total number of participants to be 250,000, while the police estimated that there were 25,000 people on hand.

In her speech, Rep. Yoo criticized the prosecution, claiming that their ongoing investigation into the figures related to the Democratic Party leader Lee Jae-myung has clear political intentions. "The Yoon Suk-yeol government should stop 'human hunting.' If you are not going to stop or reflect on your deeds, step down," she exclaimed.

"This is not the Republic of Korea, but a prosecution kingdom," continued Yoo, strongly criticizing Yoon’s close relationship with the prosecution.

Rep. Ahn claimed the ultimate responsibility for the Itaewon disaster lies on the Yoon administration and demanded the president to sincerely apologize. "President Yoon Suk-yeol should apologize to the people and immediately dismiss Prime Minister Han Duck-soo and Interior Minister Lee Sang-min."

Min, an independent lawmaker who previously served as part of the Democratic Party, also shouted, "Yoon Suk-yeol, the real culprit of the Itaewon disaster, take your responsibility.”

After the speeches, protesters marched toward the Presidential office. Security has been strengthened on the road right in front of the presidential office, with vehicles completely controlled and police task forces deployed thoroughly.

The ruling People Power Party condemned the candlelight demonstration and Democratic Party lawmakers who attended the rally, inquiring whether it is the party's official position to take part in the anti-president rally.

Chung Jin-suk, People Power Party’s interim chief, criticized the event on his social media Sunday morning saying, “Does it make sense to impeach the president who has only been in the office for six months? This is an objection to the presidential election."