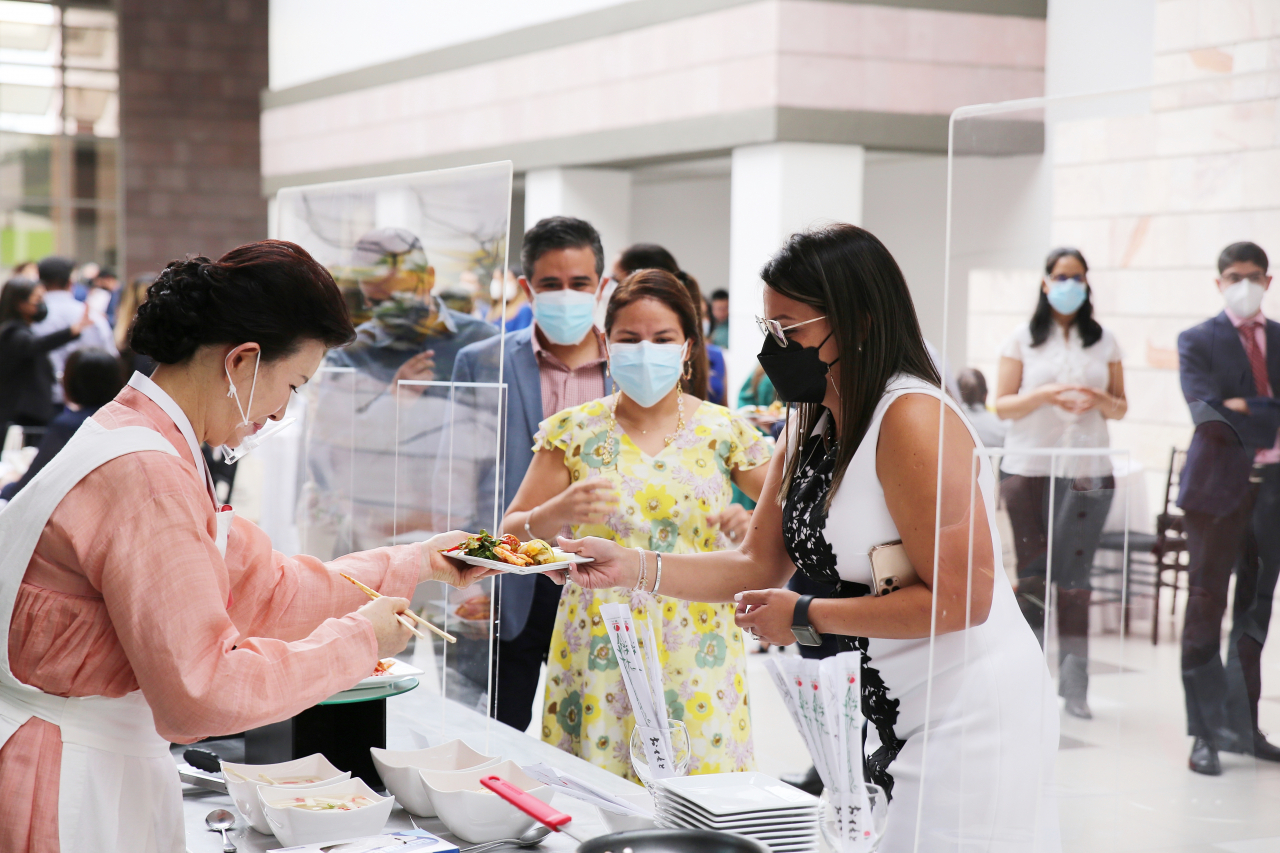 An event to promote kimchi is held on the sidelines of an industrial forum in Honduras in September 2021. (the Kimchi Association of Korea)

Nov. 22 is Kimchi Day, a day dedicated to the savory Korean soul food that Koreans take great pride in.

The South Korean government designated Kimchi Day to celebrate and promote the salted and fermented vegetable that is known for its various health benefits and is made in most Korean homes around this time of the year.

Gimjang, the process of making large quantities of kimchi before winter, has long been a major annual event in Korean households and neighborhoods where family members, relatives or neighbors gathered to salt and drain cabbages, make the spicy paste, mix it with the vegetables and let it ferment.

Koreans used to store gimjang kimchi in large earthenware jars called jangdok, along with soy sauce and other condiments, on jangdokdae, an outside space near the kitchen, so they can be preserved and kept fresh.

Nowadays, Koreans use kimchi fridges, which preserve the staple food at optimal temperatures for the best taste and texture throughout the year. A kimchi fridge is one of the key items that many Koreans bring with them when they move abroad.

According to the Ministry of Agriculture, Food and Rural Affairs, the history of fermented vegetables similar to kimchi dates back 3,000 years ago when it was first mentioned in China’s ancient “Classic of Poetry.”

The “Book of Wei, Records of the Dongyi people” of China’s “Records of the Three Kingdoms” says the people of Goguryeo (37 B.C.–668 A.D.) “ate vegetables and used salt they brought from far away, and were skilled at making liquor, sauces and pickles as the vegetation is similar to China’s.”

Historians presume kimchi during the time of the Three Kingdoms of Korea (Goguryeo, Baekje and Silla) was radish, chives, bamboo shoots and cucumber pickled in salt or vinegar.

Korea’s earliest record of kimchi is seen in the “History of Goryeo,” where radish, minari (water parsley), chives and bamboo shoots were mentioned as food served in Confucian rituals for the dead.

During the Goryeo period (918–1392), kimchi developed into three different types -- pickles, dongchimi and nabak kimchi. Spices such as scallions and garlic were added, but powdered chili or salted seafood known as jeotgal were not yet used in kimchi.

During the first half of the Joseon period, according to “Eumsikdimibang,” the oldest cookbook written by a woman in East Asia around 1670, chili, cabbage and jeogal were not used yet, but salt, soy bean paste and wheat bran were used as ingredients when pickling vegetables.

Historians believe chili was first brought into Korea around the 1592 Imjin War (Japanese invasion of Korea), but it wasn’t until about 200 years later that it was widely used as a spice for kimchi.

It is most likely that Koreans began to use chili to get rid of the fishy smell of jeotgal which was used instead of salt, according to the ministry of agriculture.

The type of cabbage seen today was grown from the early 20th century, and the vegetables that had previously been the main ingredient such as radish, cucumber and scallions became ingredients to make the paste.

The centuries-old Korean staple that goes with every meal went global after the 1988 Seoul Olympics.

Olympic officials included kimchi as one of the official foods of the Seoul Olympic Village, and international media coverage of the spicy fermented cabbage led to increased kimchi exports.

Then a bizarre thing happened.

Japan, apparently tempted by the popularity of kimchi, tried to promote the side dish as its own.

After serving “kimuchi” to then US President Bill Clinton during his visit to Japan in 1993, Japan applied to get kimuchi listed as an official food at the 1996 Atlanta Olympic Games and the 1998 World Cup in France. However, “kimchi” was chosen to be on the official menu.

In 1996, Japan attempted to get “kimuchi” listed in the Codex Alimentarius, a collection of internationally recognized standards, guidelines and recommendations published by the Food and Agriculture Organization of the UN relating to food.

But in 2001, the Codex Alimentarius Commission officially published a voluntary standard defining kimchi as "a fermented food that uses salted napa cabbages as its main ingredient mixed with seasonings, and goes through a lactic acid production process at a low temperature."

In 2013, the UNESCO listed kimjang as an intangible cultural heritage of humanity, defining it as “making and sharing kimchi in the Republic of Korea.”

In the US, the states of California, Virginia, New York as well as Washington D.C. have designated Nov. 22 as Kimchi Day.

In July, a resolution to designate Nov. 22 as Kimchi Day was submitted to the US Congress by nine legislators including Rep. Carolyn Maloney of New York.

“Kimchi has been widely acknowledged as a probiotic food item with well-established positive health benefits, serving as an excellent source of beta-carotene, calcium, potassium, dietary fiber, and vitamins A, B, C, and K, which can lower rates of heart disease, cancer, stroke, and diabetes,” reads the resolution.

“The growing interest and popularity of kimchi as a dish in the US, as evidenced by an increase in available kimchi-related food products, restaurant menu items, and interest from non-Korean consumers, represents a positive example of multicultural exchange.”

Chefs around the world are increasingly reinterpreting kimchi from their own point of view, and blending it with local cuisines to create menus such as kimchi nacho and avocado toast, kimchi pizza, kimchi juice as a condiment, and toppings on vegetarian dishes.

Despite its global popularity, kimchi consumption in Korea has been going down as Koreans’ diet became more Westernized or simply diverse.

To keep the legacy alive, the ministry of agriculture holds various promotional events on Kimchi Day, supports kimchi exporters in marketing, and has even named four scholars, a chef and a journalist in different countries as kimchi ambassadors to let the world know more about kimchi.