[ The Korea Herald – Send E-mail ]
[Herald Interview] S.Korea has to ‘take some risk’ to ensure deterrence on Taiwan
Patrick Cronin suggests Seoul quietly build capabilities and resilience, but hold them in reserve only for contingency
By Ji Da-gyum
Published : Nov 16, 2022 - 17:45
Updated : Nov 16, 2022 - 18:04 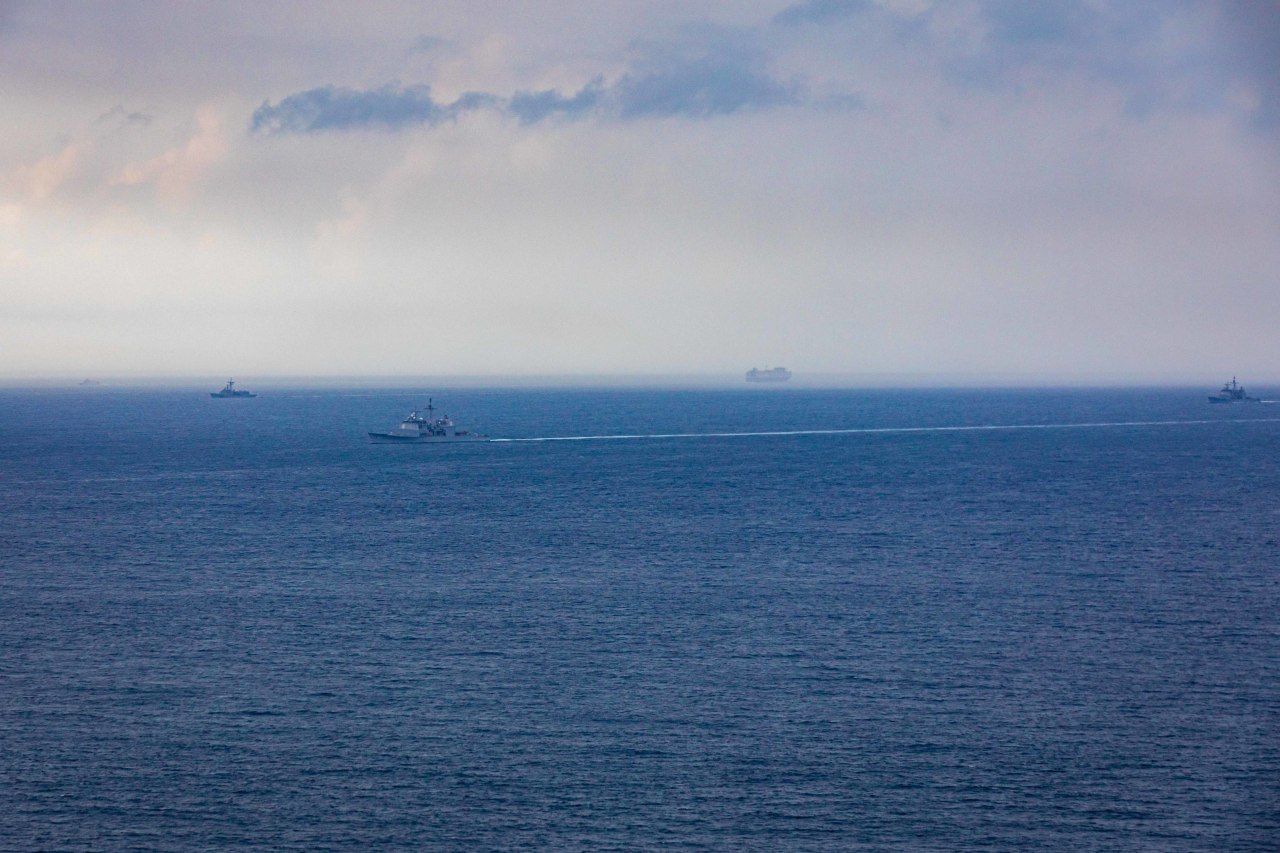 Ticonderoga-class guided-missile cruiser USS Chancellorsville (CG 62) and USS Antietam (CG 54) transit the Taiwan Strait during a routine transit near PLA(N) ships. Chancellorsville is forward-deployed to U.S. 7th Fleet in support of a free and open Indo-Pacific. (U.S. Navy photo by Mass Communication Specialist 2nd Class Justin Stack)
WASHINGTON -- South Korea has to “take on some risk” to contribute to deterring Chinese aggression against Taiwan as a US ally by reinforcing its own deterrence capabilities and readiness posture vis-a-vis North Korea and resilience against China’s coercive economic statecraft, Patrick Cronin, Asia-Pacific security chair at Hudson Institute, said.

“One way to answer that question is to ask what didn’t South Korea do before the invasion happened?” Cronin answered when asked how South Korea can contribute to defending Taiwan if a hypothetical Chinese invasion of Taiwan plays out.

“That’s a way of saying that it’s important for allies to take on some risk on the Taiwan scenario if collectively we’re going to preserve deterrence,” Cronin said during an interview with The Korea Herald at his office in Washington, DC, on Nov. 1.

The No. 1 objective of the Biden administration’s national defense strategy is clear: dissuading China from considering the use of force against Taiwan as an option.

“So it’s incumbent on South Korea to recognize that this is the South Korean ally’s main goal,” Cronin said. “South Korea has a role to play in ensuring deterrence over Taiwan, not just North Korea.”

But to that end, Cronin said, South Korea “has to take on some risk” to contribute to maintaining deterrence against China.

“Practically speaking, what does that mean? One, South Korea has to be prepared for one-and-half wars. It has to first look at its day job of protecting deterrence on the peninsula because North Korea may try something if there’s a dust-up over Taiwan or if there’s a conflict. So it has to be able to prevail ... on the peninsula,” Cronin said.

“But in addition, it has to be willing and able to provide at least support for possibly ongoing operations to break a blockade or to provide critical support for people trying to stop an invasion of Taiwan.”

In essence, South Korea has to be prepared for all possibilities, including concurrent military conflicts in the Taiwan Strait and on the Korean Peninsula, while enhancing military capabilities.

At the same time, South Korea should build up resilience against China’s potential retaliation, including coercive economic measures that could be triggered by South Korea’s readiness to support Taiwan in a contingency.

Cronin called for South Korea to build its resilience and capabilities, but hold them in reserve only for a contingency, saying South Korea has to “break glass in the event of fire.”

If China invaded Taiwan, South Korea could provide weapons and non-lethal equipment, he said. Seoul also should work to keep the sea lines of communication open to prevent illegal maritime acts, including blockades, from occurring around the peninsula and in the region.

More importantly, a Taiwan contingency should be a key consideration when South Korea and the US plan their deterrence posture, Cronin said, underscoring the importance of understanding the implications of armed conflict over Taiwan and the US military engagement for the security of the Korean Peninsula and the Indo-Pacific region.

“We don’t want to act in a way that threatens South Korea and vice versa,” Cronin said. “South Korea may need to act to help us to preserve deterrence, even if it looks very risky. Because sometimes deterrence requires showing that you’re willing to use force even if ultimately you want peace.” 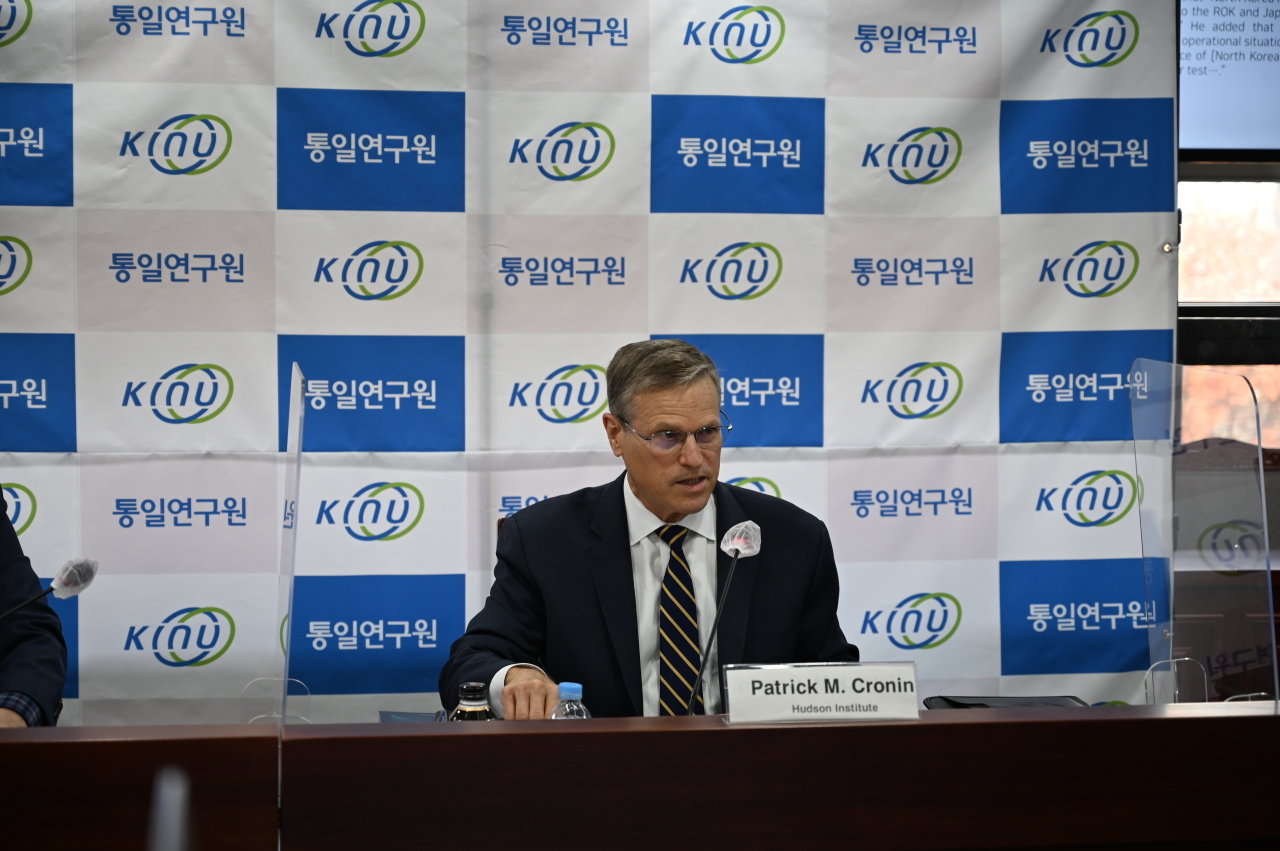 Patrick Cronin. Asia-Pacific security chair at Hudson Institute, speaks at an event hosted by Korea Institute for National Unification in Seoul in November. (Courtesy of Patrick Cronin)
Don’t let N. Korea define objectives
But Cronin pointed out that China will try to exploit a gap between the political will and capability of South Korea and the US to deter China, when asked about how the allies can bridge the difference in their strategic objective in terms of deterrence posture.

“I don’t intend to encourage a gap between the two. So, I don’t think we can afford to ask Korea to do too much directly toward China,” Cronin said, noting that South Korea faces existential threats from North Korea.

“But as South Korea builds up its capabilities, we can see the potential benefit for improving deterrence overall in Northeast Asia, and not just vis-a-vis North Korea.”

South Korean officials have said the main target of deterrence is North Korea. But the US seems to see that deterrence should be set up against broader regional threats. US Secretary of Defense Lloyd Austin said he expected to discuss “how the alliance can further enhance our deterrence posture against aggression from North Korea and other systemic competitors, including the People's Republic of China and Russia” in his meeting with South Korean Defense Minister Lee Jong-sup in July.

“We can’t simply have peace on the peninsula if we have insecurity and instability in Northeast Asia. So, South Korea has to understand that it also has to lean forward on helping work with the United States to secure stability vis-a-vis China, even if they don’t want to openly say this is deterring China.”

When asked about the effectiveness of the alliance’s strategy tailored to deter North Korea, Cronin said the deterrence strategy was working.

“There are dynamics, though, that make equal concerns of both potential for escalation and potential for attempts to use nuclear weapons for coercion. Deterrence, therefore, is a dynamic aspect of the policy that must be carefully calibrated,” Cronin said.

“We have to shift sometimes to avoid escalation and sometimes to ensure North Korea doesn’t think that it can use nuclear weapons to coerce South Korea, the United States, Japan, or others.”

Against that backdrop, Cronin viewed that the Biden administration was “pursuing a healthy deterrence strategy,” referring to the recently released, long-awaited Nuclear Posture Review. The US clarified that “there is no scenario in which the Kim regime could employ nuclear weapons and survive.”

To enhance the viability of US extended deterrence, first, South Korea and the US should separately and nationally reinforce their capabilities which are interconnected and complementary in countering and deterring North Korean threats.

“The second point is that South Korea should have a greater capacity for threatening North Korea if, as we see, North Korea keeps improving its arsenal to threaten South Korea,” Cronin said.

“Thirdly, the United States needs to ensure that the forward-deployed assets, platforms and weapons it has, both in South Korea and Japan are the most advanced and most ready for swift action should aggression be taken out by North Korea.”

North Korea in September pronounced an aggressive nuclear doctrine that allows for preemptive nuclear strikes. At the same time, North Korea has ratcheted up threats to strike key targets in South Korean territory with tactical nuclear weapons intended for use on the battlefield.

Instead, the US and South Korea may have to proactively look at other “offensive options” as North Korea has sought to develop tactical nuclear weapons designed to be used on a battlefield. For instance, deploying a nuclear-powered attack submarine equipped with Tomahawk Land Attack Missiles, which currently does not exist, could be an option.

But despite mounting North Korean threats, Cronin voiced opposition to the idea of accepting North Korea as a nuclear state to manage and reduce tension and risk of war on the Korean Peninsula.

“From an American perspective, we cannot count on accepting a nuclear North Korea as a permanent state without ensuring that South Korea has equal capabilities.”

More importantly, the US and South Korea should not renounce the ultimate goal of achieving complete denuclearization in face of North Korea’s continuing nuclear saber-rattling and countless violations of UN Security Council resolutions and international laws.

“Don’t let North Korea define our objectives just because it has nuclear weapons. Our goal is still peace through a denuclearized peninsula. That’s the long-term goal,” Cronin said.

Cronin underlined that it is imperative for the US and South Korea to retain the ultimate goal to make the North Korean leadership change their perception and recognize that he is on the wrong track to achieving his own goal.

“Whereas we have lots of accountability, we’re not perfect and we’re wrong all the time. But we have people tell us that. In North Korea, nobody tells them that. So it’s up to us to tell Kim Jong-un that, ‘No, you will not achieve your goals with nuclear weapons,’” Cronin said.

“We are actually on the right track, but North Korea is on the wrong track. The ball is in North Korea’s court. In the meantime, we see the ball game they’re playing, so we have to play on our own as well.”
____________

The Yoon Suk-yeol government has signaled a preference for strategic clarity amid the intensifying US-China rivalry, jettisoning its predecessor’s balancing act.

But in Seoul, policy discussion on South Korea’s Indo-Pacific strategy has focused less on the country’s potential role in the event of China’s invasion of Taiwan and more on how it will counter threats from North Korea.

The absence of a face-to-face meeting between President Yoon Suk-yeol and US House Speaker Nancy Pelosi during her trip to South Korea in August, which came right after her visit to Taiwan, illustrated the dilemma South Korea faces over Taiwan Strait issues.

If a Taiwan contingency were to break out, South Korea would inevitably be under enormous pressure from both the US and China. Experts share their views on South Korea’s role in a possible military conflict between the US and China over Taiwan in their in-person interview with The Korea Herald in Washington before the 54th South Korea-US Security Consultative Meeting.  -- Ed.