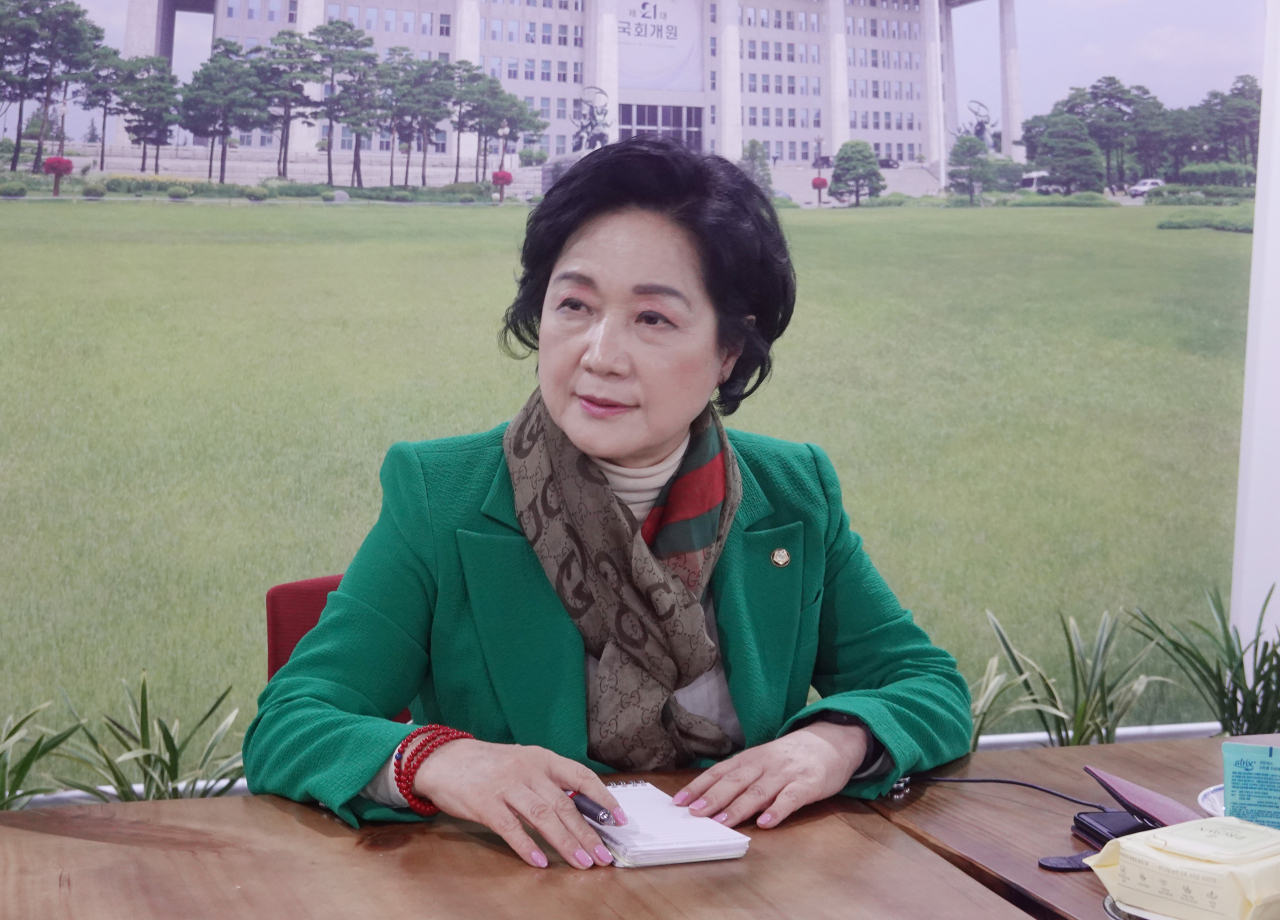 Rep. Cho Myung-hee, a member of the Health and Welfare Committee of the National Assembly (Cho's office)

Cho Myung-hee, a representative from the People Power Party on the Health and Welfare Committee of the National Assembly, has worked to come up with assorted measures at the parliamentary level aiming to help improve public health.

She spoke with The Korea Herald about these issues.

The Korea Herald: How serious are the undocumented immigrant children’s issues?

Cho Myung-hee: These children didn’t choose to come to this country illegally, but they were brought by their parents.

Although the Child Welfare Act clearly stipulates that "children shall be entitled to the right to be protected against discrimination of any kind," undocumented children are denied the rights they rightfully deserve, simply because they are not entitled to stay by law.

Most of them have no access to the basic health care services, because they are not eligible for the public health insurance coverage. Not to mention infringement of the children’s right to parental care. Most of the parents work long hours or have limited knowledge on child care. According to the Child Care Act, only children with Korean nationality are eligible for subsidies such as child care fees and child home care allowance.

Undocumented immigrant families who struggle with severe financial difficulties can’t afford to pay for the cost of child care center services, which results in depriving their kids of emotional support they would otherwise be provided under different circumstances.

KH: What measures do you think should be taken?

Cho: Expensive medical treatments, such as surgery, break undocumented families apart. Concerns would be raised over possible burdens of supporting them on the public health insurance budget, but it doesn’t have to be the medical costs of an entire undocumented family that is covered by the public insurance -- we can make it cover their children only.

Or we can allow these families to pay for the public insurance coverage by themselves. When it comes to child care rights, we can expand the eligibility of emergency aid to cover undocumented children too. Or if these families are unable to pay for the day care center, the government could just pay the cost for them.

KH: What do you think is behind the huge discrepancy in the kindergarten enrollment rate across different areas?

Cho: Under the previous Moon (Jae-in) administration, one of the top 100 priorities was to increase the enrollment rate up to 40 percent by 2022, and thus the key work plans of the Ministry of Health and Welfare were aligned as such.

During this year’s National Assembly audit, it turned out that as of this June, 49.8 percent of all children in Seoul go to public kindergarten, while that rate drops by about half in the rest of the country.

Jeju Island has the lowest rate in the nation at 10.5 percent, and it is followed by Ulsan, Gwangju, North Gyeongsang Province and Daejeon, where the rate stands at roughly 20 percent. The enrollment numbers in Korea are extremely low, far below the OECD average of 66 percent. Meanwhile, the number of public kindergartens is less than 20 percent in 15 of the country's regions, apart from Seoul at 35 percent and Sejong at 32 percent. To increase public child care enrollment, we should urgently address this regional disparity.

KH: Distress has been exacerbated remarkably in the young adult population, due in large part to the COVID-19 pandemic and the weak job market. It was pointed out that urgent action is needed to improve their mental health. What steps should be taken?

Cho: Society became more isolated during the COVID-19 social distancing period. As the number of patients with depression spurred by the coronavirus pandemic, or so-called “COVID Blues,” has significantly surged, people became more aware of the importance of being mentally healthy.

Preventive intervention is equally important too. Active steps should be taken, such as the government working with private health care institutions to put in place a comprehensive mental health care system at the community level, and through this, government assistance will make nonmedical mental health therapy more accessible for more people.

KH: Experts say the senior population is expected to reach 10 million by 2025. What measure do you think can be taken to address potential challenges associated with the graying population?

Cho: There is a saying that goes “a country thrives when senior citizens feel happy living in the country."

Over the last five years under the Moon administration, it didn’t seem that many elderly folks led a happy life. Seniors who wanted to work were denied a job and abused elderly people were neglected.

The government Senior Employment Program paid its employees who worked on average 30 hours a month a mere 270,000 won ($200).

As of 2021, cases of elder abuse reported leaped by 45.7 percent to 19,391 over the previous five years. It is particularly concerning to learn that most of them, 88 percent, are reported as domestic abuse, which requires urgent steps to be taken.

One possible solution I suggest is the Weekend Senior Employment Program that provides the elderly with job opportunities that their younger neighbors are reluctant to take on during weekends. In addition, more effective measures are needed, such as to continue to put in place elderly protective service agencies that proactively prevent elder abuse from taking place, as well as shelters for victims of elder abuse, and to make it mandatory for the perpetrators to take elder violence prevention programs.

KH: Can you share with us your visions for the rest of your term in the 21st National Assembly?

Cho: I am the only scientist in the proportional representation seats of the Assembly, and as a first-term Assembly member, I worked really hard to contribute to the lawmaking process.

Now the Assembly is in the second half of the term and I started out by holding a dialogue on fostering balanced growth of national medical complexes in September. During the Assembly audit sessions, my focus was on how to scale up universal health services across the country, including issues related to patients who make trips to Seoul and its surrounding cities just to get medical treatment, inequality in geographic distribution of accessible medical services and the government R&D investment that was made disproportionately to support medical services provided only in Seoul and its adjacent areas.

It is truly my honor and pleasure to represent the city where I was born and raised, Daegu and North Gyeongsang Province, and to give the love I received back to the community. My plan for the rest of the Assembly term is to work even harder than I did.