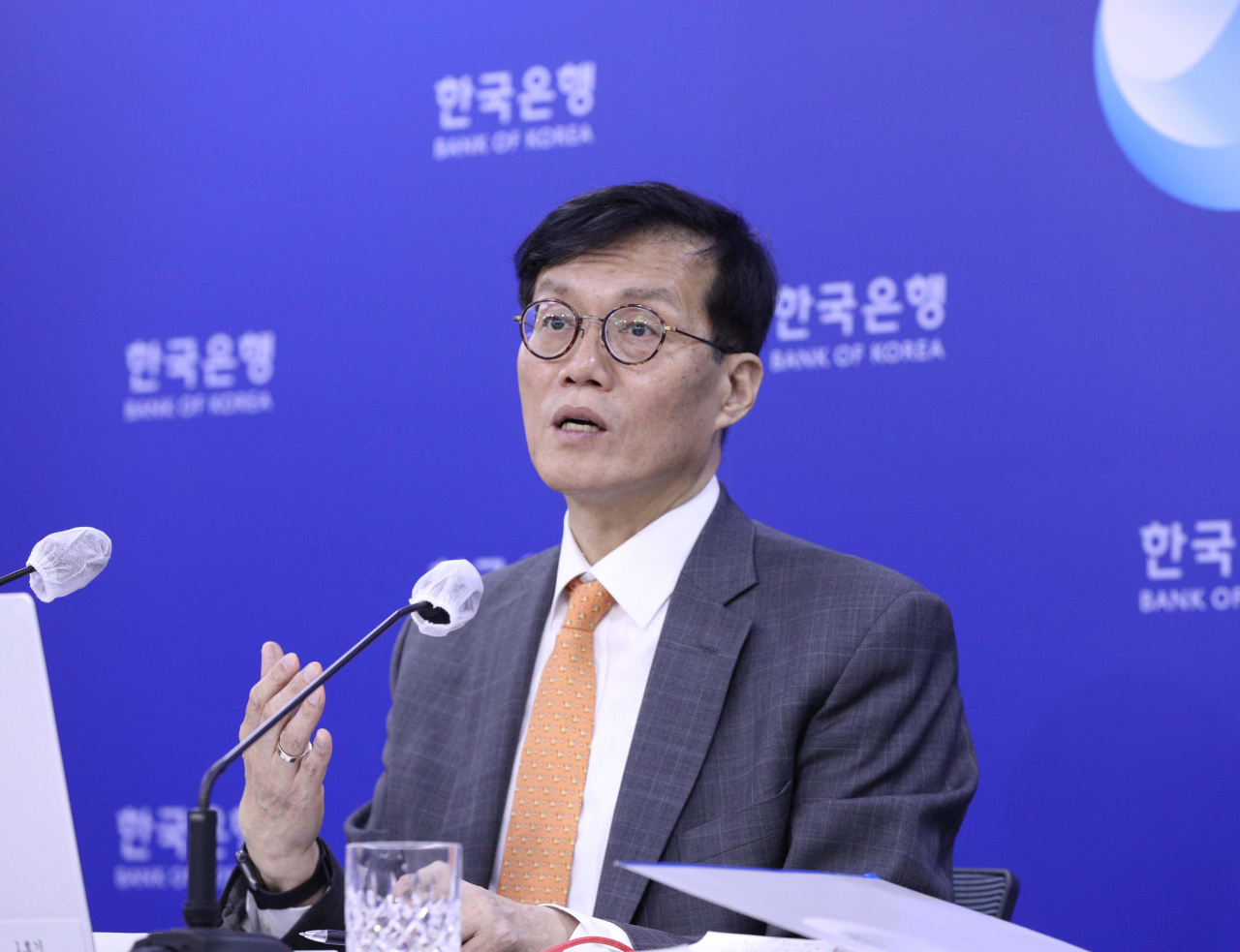 Bank of Korea Gov. Rhee Chang-yong speaks during a press conference at the central bank in Seoul on Oct. 12, 2022. The central bank's monetary policy board decided to raise the benchmark seven-day repo rate from 2.5 percent to 3 percent, delivering another big-step rate hike as it is striving to bring inflation under control despite worries that it could excessively slow down economic growth. (Yonhap)

South Korea's top central banker said Friday that it is a top priority to ensure price stability and reduce inflation pressure through monetary tightening but worried there are "growing signs of stress" in various sectors amid recent steep interest rate hikes.

Rhee Chang-yong, governor of the Bank of Korea, also voiced worries over money moving from non-banking sectors to the banking sector due to fast-rising deposit rates, saying that it is an "important issue" to turn the tide around.

"More recently, prices and our exchange rate have somewhat stabilized and the speed of US interest rate hikes is expected to be less rapid," he told a conference in Seoul. "Ensuring price stability and reducing inflation through tight monetary policy are still our priority."

The BOK has hiked its key policy rate eight times by a combined 2.5 percentage point since August last year to tamp down rising inflation. It is widely expected to deliver another rate hike at this year's last monetary policy meeting scheduled for later this month.

The central bank is under pressure to deliver another rate hike at this year's last monetary policy meeting later this month amid little signs of a marked letup in price hikes, but an additional rate hike would deepen worries over its adverse effect on business investment, consumer spending and the overall economy.

Observers also say that it has become tough for the BOK to delve into a sharp rate hike at a time when financial market volatility has recently heightened in the wake of the so-called Legoland debt default and other developments that sent corporate bond yields soaring, causing worries over a credit crunch.

"As the recent interest rate increase has been fast by any historical standard in Korea, there are growing signs of stress in various sectors, and maintaining financial stability, especially in nonbanking financial sectors, is becoming an important issue," he said.

"In fact, we are seeing signs of money move from nonbanking sectors to the banking sector after deposit rates in banks significantly increased following policy rate hikes," he added. "How to recycle those flows back to nonbanking sectors is an important policy issue for the BOK to manage financial market stability in this period of high inflation and tight monetary policy."

With regard to long-term challenges facing the Korean economy, he cited the risk of economic and geopolitical fragmentation that he worries would result in the contraction of global economy and trade.

"In this respect, global cooperation at the economic and political levels is more urgently needed than ever," he said.

"Countries responsible for global leadership, among others, need to promote collaboration and cooperative competition, since the weakening of trade and global growth stemming from fragmentation can have negative impacts on all countries," he added.