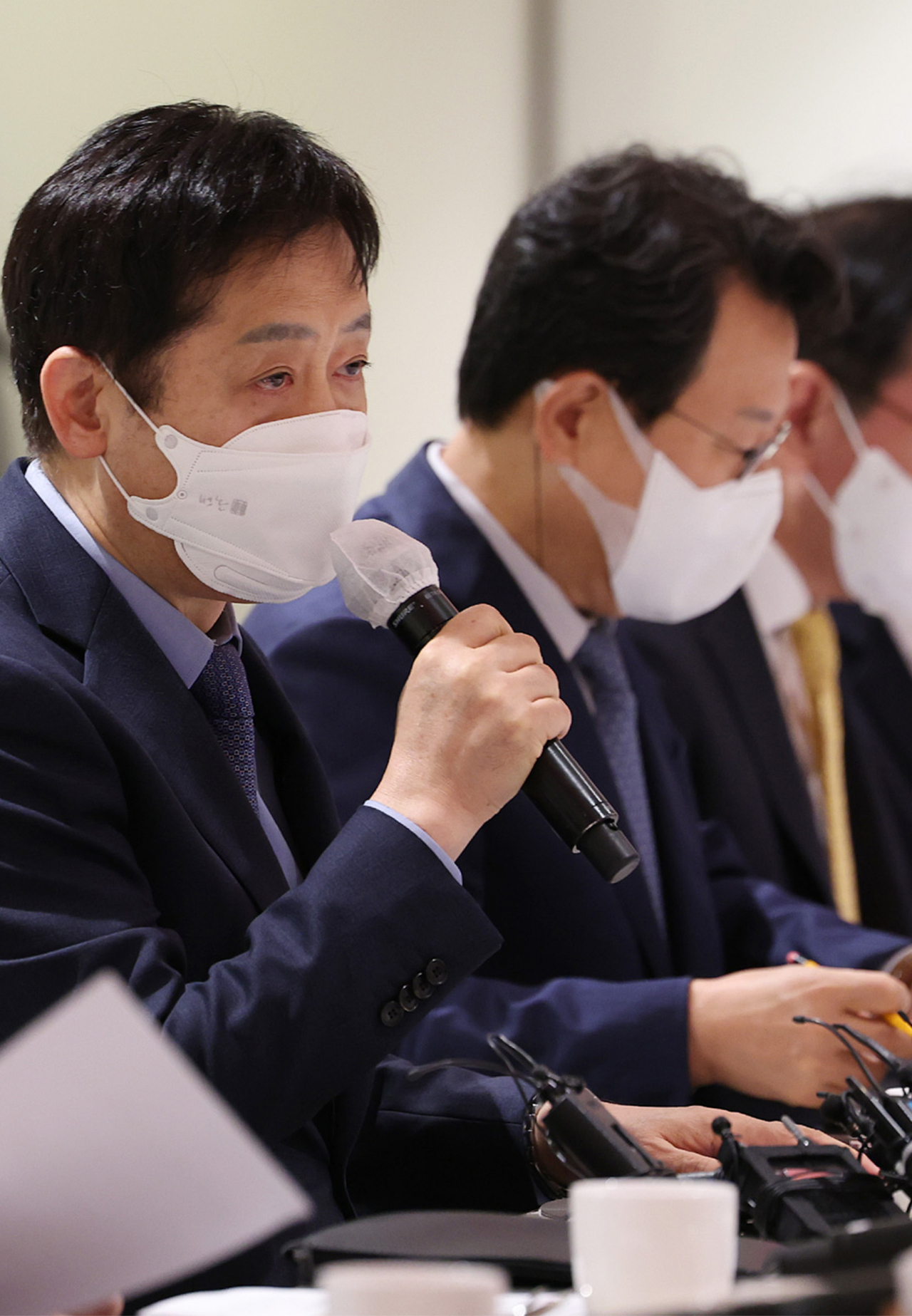 Financial Services Commission Chairman Kim Joo-hyeon (left) speaks during a meeting with the heads of commercial banks at the Hall of Banks in Seoul on Wednesday. (Yonhap)

Kim Joo-hyeon, head of the Financial Services Commission, made the request in a meeting with chiefs of major commercial banks amid worries over a credit crunch sparked by a series of market-destabilizing events, including the Legoland-linked debt default.

"Concerns over a credit crunch remain high due to excessive contraction in sentiment," Kim told the meeting in central Seoul "If the government's market stabilization efforts and banks' endeavor combine, it would be helpful to provide funds to businesses and small merchants and stabilize the bond and short-term money markets."

The top officials who attended the meeting reaffirmed their earlier promise to inject liquidity in close cooperation with the government's market stabilization efforts.

"The banking community appears committed to taking more active action in response to a market crisis," Kim Kwang-soo, chief of the Korea Federation of Banks, said. "Banks will carry out functions expected from the financial community."

The meeting came as worries over a credit crunch have persisted in the wake of the default on a municipal-guaranteed debt issued to construct the Legoland theme park in the eastern province of Gangwon.

Volatility has further worsened later as Heungkuk Life Insurance Co. said that it would not exercise a call option for hybrid bonds, citing unfavorable market conditions. It was a rare move deemed to seriously undermine trust in the debt market.

Though the insurer reversed the decision and promised to exercise the call option later, market sentiment has been rattled, with many worrying that it points to the severity of challenges facing the corporate bond and short-term money markets already grappling with fast-rising borrowing costs caused by global monetary tightening.

The government has announced a spate of market stabilization measures, including injection of at least 50 trillion won ($36.3 billion) worth of liquidity mostly through bond-buying schemes.

In a bid to keep a lid on soaring market rates, major banks have promised to minimize their bond selling and inject around 95 trillion won worth of liquidity to ease market volatility. (Yonhap)