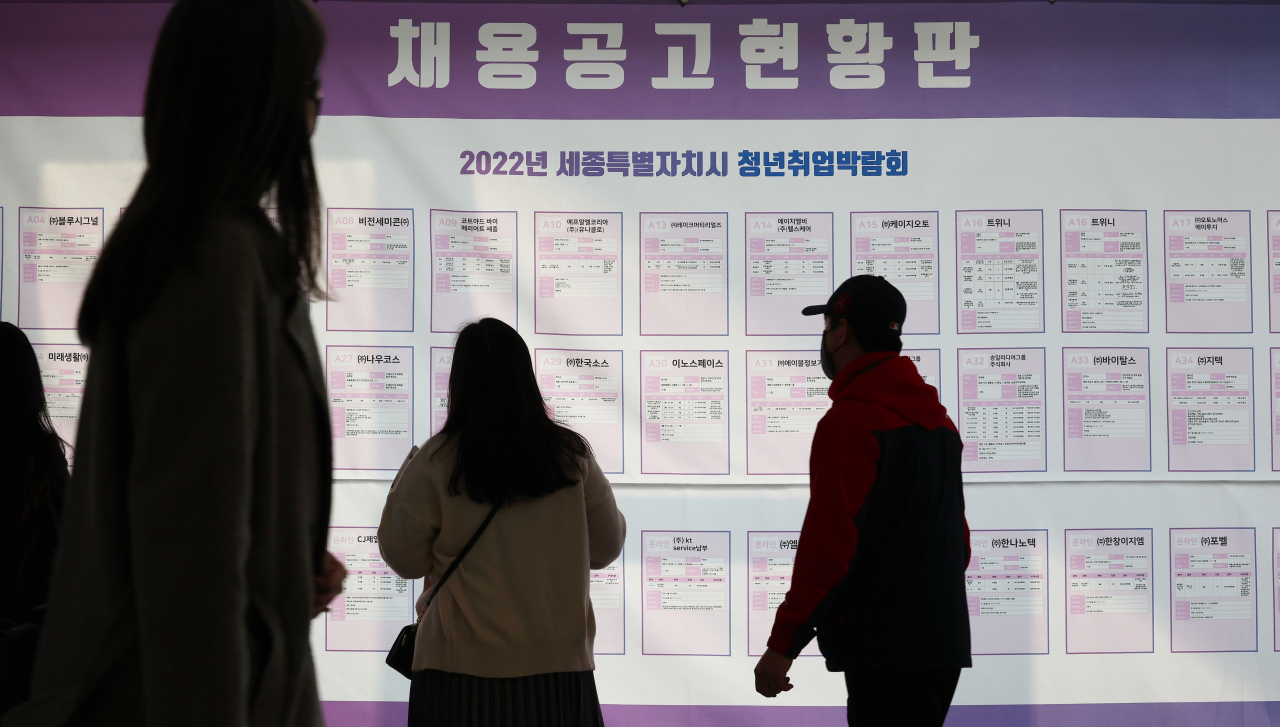 Job seekers look at information at a job fair in the central city of Sejong on Tuesday. (Yonhap)

South Korea added jobs for the 20th straight month in October, data showed Wednesday, but the growth continued to slow for the fifth month in a row as the country braces for a possible recession amid high inflation and slowed growth.

The number of employed people stood at 28.41 million last month, up 677,000 from a year earlier, according to the data compiled by Statistics Korea. It was the largest on-year growth for any October since 1999.

The October figure marked a slight drop from the on-year rise of 707,000 tallied in the previous month.

The new jobs were mainly created in the manufacturing, accommodation, restaurant and health care industries, apparently on the back of eased social distancing rules.

In contrast, the number of people who got new jobs in the retail and financial sectors fell over the period.

The latest data came as the South Korean economy faces concerns over a recession amid inflation and the US' aggressive monetary tightening.

South Korea's on-year growth in consumer prices, a key gauge of inflation, also rose 5.7 percent last month from a year earlier, picking up speed from a 5.6 percent advance in September.

"Although the number of employed people is rising, the growth has slowed," an official from the statistics agency said. "As there are many external factors, including borrowing costs, prices and foreign exchange rates, we need to wait and see if the trend will continue."

The Korean won fell around 17 percent against the US dollar this year, although it slightly rebounded over the recent trading sessions amid political uncertainties in the US over the midterm elections.

To cope with the inflation, the Bank of Korea raised the benchmark seven-day repo rate from 2.5 percent to 3 percent last month. It is the first time in about 10 years that the rate has risen to the 3 percent range. (Yonhap)