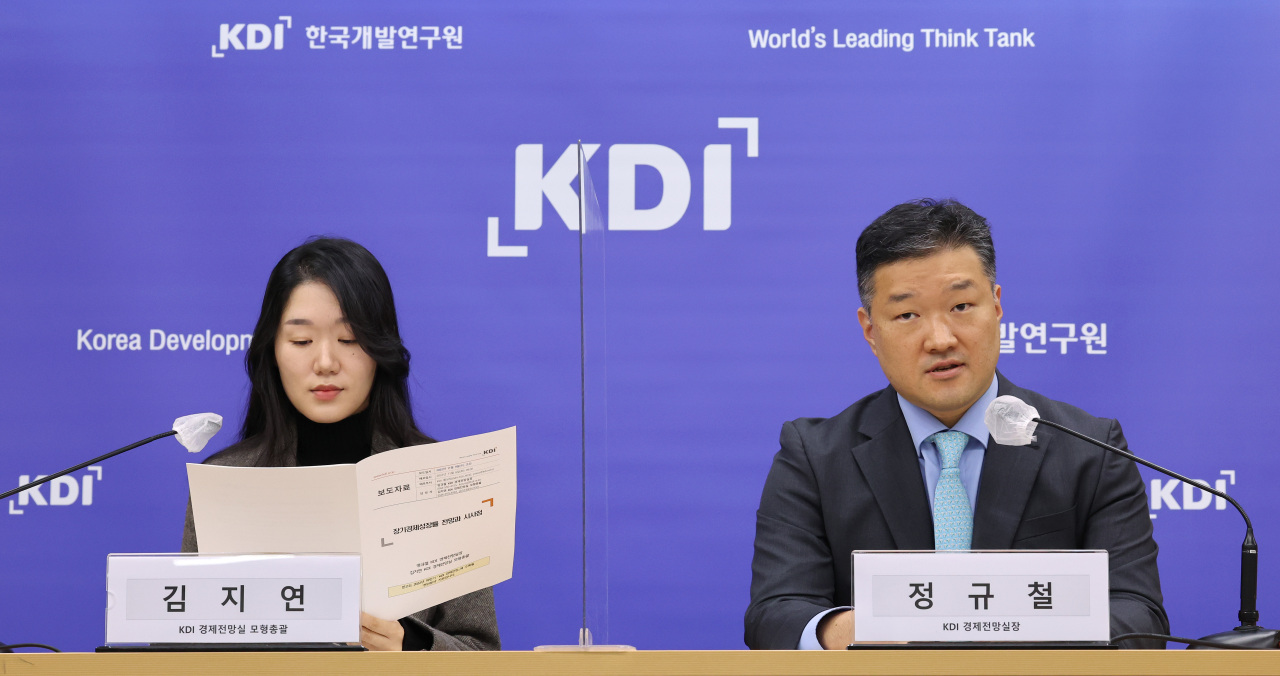 Researchers from the Korea Development Institute unveil their outlook on the nation’s long-term economic growth at Government Complex Sejong on Tuesday. (Yonhap)
SEJONG -- South Korea's state-run think tank warned Tuesday that the nation's economy could slow practically to a standstill in 2050 unless its falling productivity is elevated through structural reform efforts.

The Korea Development Institute released a report on the long-term outlook of the Korean economy.

According to the report, the nation's economic growth rate is likely to be just 1.3 percent in the 2030s and 0.7 percent in the 2040s per annum in the wake of a rapid decline in the working age population.

The KDI said gross domestic product growth in the coming decades will gradually fall after posting 1.9 percent per annum between 2023 and 2030.

It said the coming low-growth era would be mainly attributed to a contracted workforce and increased portion of seniors, aged 65 or over, a large portion of whom will not participate in economic activities.

The institute also predicted the figures -- 1.3 percent and 0.7 percent -- would change according to coming situations, suggesting both positive and negative scenarios according to the extent of productivity growth, affected by a variety of sectors such as labor, finance and regulations on businesses.

Further, it warned that growth in 2050 could be zero in the negative scenario.

It said the nation needs to actively conduct structural reform in the economy in a bid to ease unfavorable effects from the expected demographic change and raise productivity.

It suggested that the nation push for deregulatory policies, foster an environment in which women and seniors actively participate in economic activities and actively absorb foreign manpower.

In addition, the nation needs to bolster the quality of workforce via educational reforms, it said.

The KDI also advised that the nation naturally reflect the projected decline in long-term GDP growth in macroeconomic policies, saying the government “needs to refrain from setting the policy target far beyond the potential growth rate.”