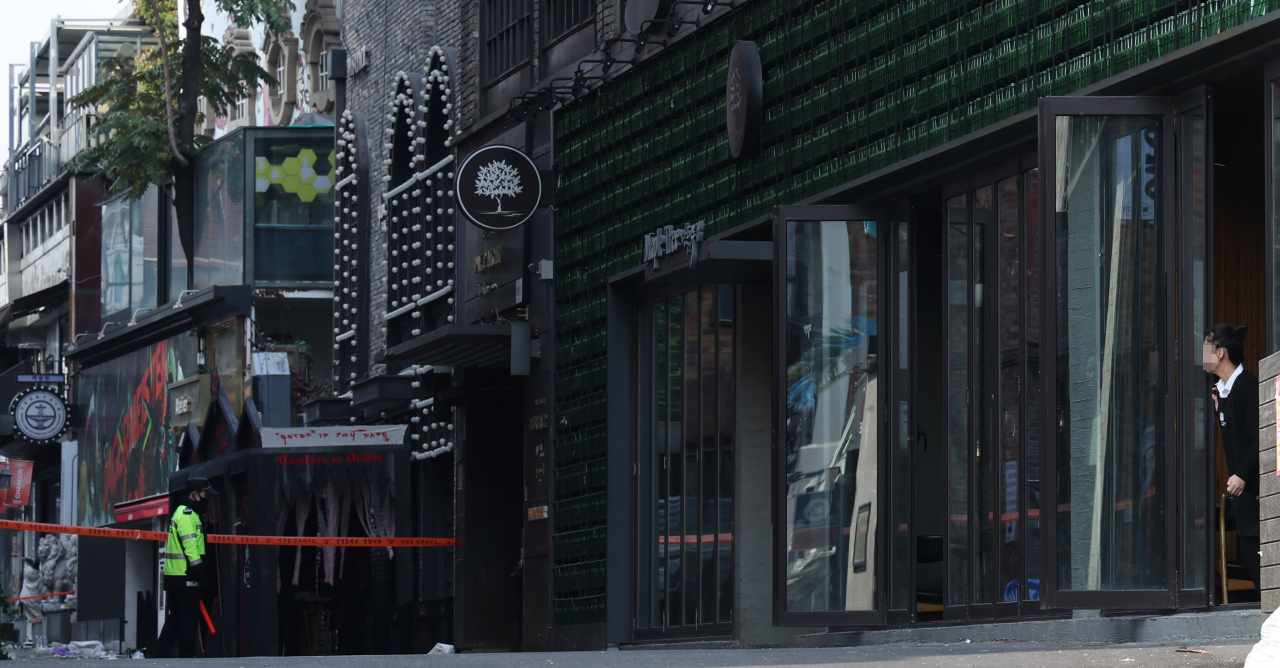 A shop owner looks on as a police officer patrols the site of the Itaewon crush surge on Monday. (Yonhap)

Having lived in South Korea since 2005, Chris Truter set up a restaurant dedicated to celebrating the cuisine of his native country South Africa in central Seoul's Itaewon neighborhood soon after marrying his Korean wife and deciding to permanently settle in the country.

His restaurant, Braai Republic, opened in hopes of offering home-style meals to the few, often marginalized South African immigrants living in South Korea, but it quickly gained popularity as it began to attract adventurous Korean customers looking to try the unique taste of the African veld.

“The store did well for 8 years, enough to open another branch in Pyeongtaek -- when the pandemic hit and nearly drove us out of business. I had to use up all of my savings (to keep us in business). Ten years of savings down the drain,” said Truter.

“But luckily, our business slowly recovered over time as more customers began to visit Itaewon,” he said.

Just when he thought the restaurant had started to make a recovery, Truter said he is expecting “not to be busy again” for a while, due to an unexpected tragedy that occurred some 290 meters away from the restaurant.

“Nobody wants to go to the Itaewon main street, it feels horrible. You think of all the children that died, and that doesn’t feel good. You come here to have a good time, but the restaurants are near where someone died. No one would want to eat here,” said Truter.

Truter is one of many shop owners in Itaewon who worry the recent incident in Itaewon will negatively affect the local businesses in the area.

Sa hyun-yong, the owner of Big Tom, a plus-sized clothing store for men located just across the site of the incident, raised similar concerns.

“Our customers are mainly comprised of people in their twenties and thirties. With so many lives lost right across the store, I wonder if people are going to want to shop for clothes here again for a long time,” said Sa.

“I feel as if my customers have died across the street. I am thinking of reducing opening hours since no one is coming, and I don’t feel very well (because of the incident),” he added.

Song Seok-gu, the owner of Jeon, jijeonneung – a Korean-style pancake restaurant -- said that the tragedy could impact the store more heavily than the pandemic did.

“The store opened three years ago and was able to barely pull through (the pandemic). We’ve accumulated lots of debt over the years, just to stay in business. We were hopeful we would be able to pay back our debts (starting now), but now, we don’t know what to expect,” said Song.

Yaser Ghanayem, owner of popular Jordanian restaurant Petra in Itaewon, argued that stores with lots of regulars would be able to get back on track, but stores which haven’t been able to secure regulars would suffer heavy losses.

“During the pandemic, I saw many stores go out of business because they did not have customers who constantly provided them with a source of income. I expect this incident will have the same effect (on Itaewon stores),” he said.

Itaewon, a mecca for shopping and tourist attractions, is home to some 2,184 stores, composed of 48.6 percent retail businesses and 46.3 percent restaurants and cafes, according to a survey conducted by Seoul National University.

According to the Korea Real Estate Board's survey, the stores in Itaewon experienced heavy losses during the pandemic era, with the vacancy rate for shopping malls in Itaewon rising to 28.9 percent in first quarter of 2020, compared to 19.9 percent the year before.

The increase in vacancy rate for the region in 2019 to 2020 had marked the highest in Seoul.

However, data shows that the shopping mecca had shown a drastic recovery with the pandemic showing its end.

In the second quarter of 2022, Hannam and Itaewon recorded the lowest vacancy rate in Seoul -- with 10.8 percent vacancy rate, according to a report released by overseas real estate consulting firm Cushman & Wakefield.

Experts say that the current outlook for Itaewon businesses is bleak.

"As demand from local residential, business, and commercial complexes is low, the district mainly thrives on people who visit the area. This incident, which is expected to drastically reduce the number of people who visit the neighborhood to eat and shop, will have an accumulated impact on Itaewon's local businesses, as the area consecutively suffered through effects of gentrification and the pandemic," he said.