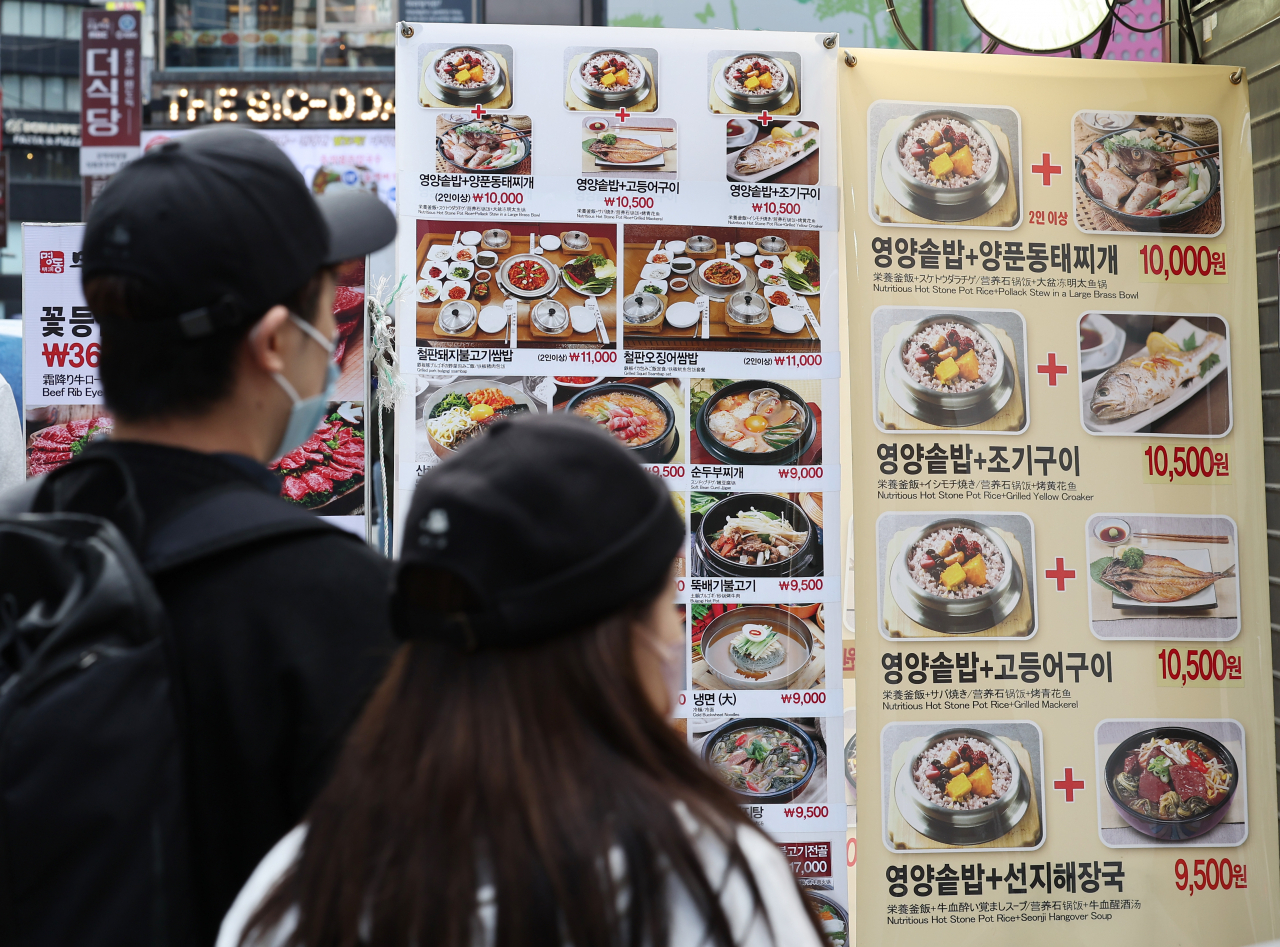 Citizens walk by standing signs of a restaurant menu in Seoul on Oct. 10. (Yonhap)

The core consumer price index, an inflation barometer that measures consumer prices excluding food and energy, has increased by the largest margin in 21 years.

Statistics Korea’s all items index logged 106.09 as of October this year, up 3.5 percent from the previous year’s January-to-October period. It was also the largest jump on year in 14 years. The index is an OECD standard for core inflation, which excludes food and energy because those prices are more volatile due to seasonal and external factors.

As the core inflation is an indicator of overall trends in consumer prices that is less prone to temporary fluctuations, increases suggest more inflation factors are stemming from the demand side, not the supply side.

This means high inflation is likely to continue even if the prices of global materials are tamed.

Separate surveys also showed that people in Seoul are feeling an extra burden from dining out.

According to a Korea National Council of Consumer Organization’s survey that asked 1,000 adults across the country, 83.3 percent of respondents said the cost of dining out, including lunch, had increased.

Regarding the country's major food sellers’ recent decisions to raise the prices of their products, 54.2 percent of the respondents said the companies are increasing the prices higher than necessary to rake in more profits.

In order to curb the spike in consumer prices, the government has implemented a series of measures, including the introduction of tariff quotas policies on agricultural and livestock imports and the release of previously-purchased food products.

The Seoul Institute’s quarterly report on the city residents’ economic sentiment showed that the third quarter’s consumer attitude index sharply fell by 10.5 points to 90.7. According to the SI, it was the first drop since the first quarter of last year.

If the consumer attitude index is above 100, it means that people with positive economic and spending expectations outnumber those with negative outlooks. If the figure is below 100, it indicates that pessimists outnumber optimists.

According to the report, the future living condition index decreased 6.3 points to 93.7, the category’s first decline in a year. For the reasons behind the negative outlook, 41.7 percent picked inflation, followed by decreased income with 23.1 percent.

The report’s future consumption spending index plunged by 9 points to 87.3. By product, food and beverages had the highest spending index with 104.5 while culture and entertainment spending and clothes spending were the lowest at 71.5 and 71.4 points, respectively. The report demonstrated that people were only willing to open up their wallets for a limited range of daily necessities.

Consumers were not the only ones feeling the pinch. According to the Small Enterprise and Market Service’s poll on 2,400 small merchants and business owners nationwide, the business survey index fell to 62.7, a decrease of 8.9 points on month.

If the business survey index is lower than 100, more businesses believe that the economy has worsened than think it has improved.

Asked why the business survey index dipped, 57.6 percent of the respondents chose decreased spending, followed by inflation and interest rate hikes at 36.2 percent.