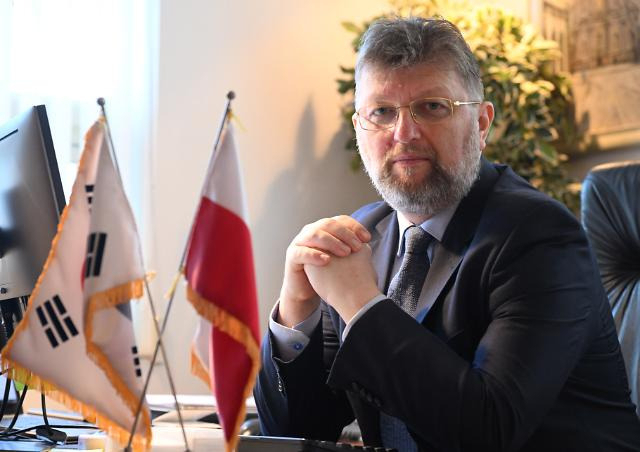 Polish Ambassador Piotr Ostaszewski is pictured for an interview with The Korea Herald at Polish Embassy in Seoul, on Sept. 6. (Park Hae-mook/The Korea Herald)

Belarus' claim of neutrality in the Russia-Ukraine war is false, said Polish Ambassador to Korea Piotr Ostaszewski in a recent interview with The Korea Herald at the Polish Embassy in Seoul.

Belarus is not only sympathizing with Russia, but wholly and politically backing Russian aggression against Ukraine, Ostaszewski stressed.

According to Ostaszewski, Belarus hosted thousands of Russian soldiers within its territory, granted logistical support and allowed Russia to use Belarusian soil to attack Ukraine.

Supports include launching rockets and missiles, he said.

“Amendments show increased militarization of Belarus. Belarus cannot be perceived as a stability provider anymore,” Ostaszewski said, pointing to recent changes in the Belarusian constitution such as deletion of the neutrality and non-nuclear status clause.

“Minsk is a destabilizing factor in the region,” he said.

Ostaszewski urged Belarus to withdraw from the Russian war against Ukraine.

“It is more important within the context of the war in Ukraine – rather unprovoked Russian aggression within which Belarus plays some role with illegal immigration,” Ostaszewski said.

“Belarus is just an instrument of Russian policy,” Ostaszewski said, accusing Belarus of artificially creating a migration crisis at the European Union border using migrants for political purposes, and treating many migrants in inhumane ways.

Ostaszewski recalled the forced landing of a Ryanair plane in Minsk in May 2021, citing an International Civil Aviation Organization investigation.

According to Ostaszewski, the forced landing was an offense under the Convention for the Suppression of Unlawful Acts against the safety of Civil, which contravenes the spirit of the Convention on International Civil Aviation.

The Polish ambassador reiterated that the Polish-Belarus emergency remains a political crisis, and suggested solutions to the border crisis.

“Illegal immigration is illegal. Belarus is the source of political crisis,” he alleged, urging Belarus not to invite immigrants and push them forward to the Polish border.

Ostaszewski highlighted the second anniversary of the Belarusian presidential elections as another political crisis.

According to the ambassador, thousands of Belarusians were arrested, fined or sentenced to jail. Independent organizations and media were banned, and more than 1,200 political prisoners remain detained, including 29 journalists, he said.

He stressed the need to gather evidence of human rights violations to hold Belarusian perpetrators accountable and support democratic Belarusian opposition in their struggle for a free, democratic and sovereign Belarus.

Ostaszewski advised repeating calls on Minsk to organize new free and fair presidential elections. He also called for the Belarusian government to release and rehabilitate all political prisoners in order to engage in an inclusive dialogue with the democratic opposition.

Belarus should stop hostile activities as well as repressions against Belarusian people and the Polish minority in Belarus, Ostaszewski said. He called for the release of leaders of the Union of Poles in Belarus, such as Andzelika Borys, currently under house arrest, and Andrzej Poczobut, under arrest since 2021.

According to Ostaszewski, Belarus eliminated the Polish language from the public education system in violation of bilateral agreements.

Ostaszewski disagreed with Belarus’ ambassador to Korea Andrew Chernetsky’s statement in an interview with The Korea Herald on Jan. 4, in which he stated that Polish and EU officials consistently refused all efforts at dialogue and instead politicized the problem. Ostaszewski compared the Belarusian ambassador’s statement to Greek philosopher Eubulides’ approach.

“I should say Belarus’ arguments represent a typical Eubulides’ approach -- a notorious liar who says, ‘Everything I say is lie,’” he said.

“The question is: is (Chernetsky) lying or telling the truth?” Ostaszewski said, urging democratic countries to remain united in keeping Belarus high on the international agenda and remain actively engaged in the Belarusian portfolio.

According to Chernetsky, Belarus has proposed that the European Commission organize consultations on cooperation in combatting illegal migration several times since April 2021.

When asked about Poland’s harsh actions in pushing back refugees by creating walls and denying access to journalists and humanitarian workers, Ostaszewski denied such actions.

“No one has ever been pushed back,” Ostaszewski said.

The ambassador said immigrants come to Belarus, are granted visas and then pushed toward the Polish border.

“Poland does not push back refugees. Poland helps refugees as much as it can,” he said. He cited Poland’s acceptance of 7 million refugees from Ukraine.

“But regarding illegal immigrants, it’s a different problem,” Ostaszewski said.

Refuges can legally apply for asylum and receive such a status on a legal basis at checkpoints, according to the ambassador.

“Poland respects all the international agreements and acts,” he stressed.

The ambassador said that Belarus is breaching international law and norms, repressing its own people.

According to Ostaszewski, Belarus abolished two schools teaching Polish as a medium of instruction in Grodno and Wolkowysk for the 2022-23 academic year despite numerous appeals from Poland to abstain from this decision.

“This has been confirmed by the Polish parliamentary committee for the contact of the Polish community abroad,” he said, adding that there are no Polish language classes in Grodno and Vawkavysk.

Belarusian authorities defined the change as the result of an amendment to Article 82 of the Education Act, which allows teaching in minority languages, Ostaszewski said.

At schools in Grodno and Vawkavysk, the medium of instruction is Belarusian or Russian, he noted.

In discussing the legal grounds of the abolition, he underlined that Belarus breached Article 13 and 14 of a 1995 Polish-Belarusian agreement on education, according to which Poland and Belarus agreed to allow the teaching of each other’s languages.

“Poland and Belarus agreed to respect and provide the best conditions for teaching their mother tongues,” Ostaszewski said.

According to the ambassador, a current Belarusian legislation violates an article of another Polish-Belarusian agreement from July 20, 2016 on bilateral cooperation in education. Article 8, paragraph 1 of the agreement allows the Polish minority in Belarus to learn and be taught in the Polish language.

“Belarus as a UN member signed and ratified the Civil and Political Rights Pact within which Article 27 states clearly minorities’ rights protection,” he said, stressing that Belarus broke not only bilateral agreements with Poland, but also international laws.