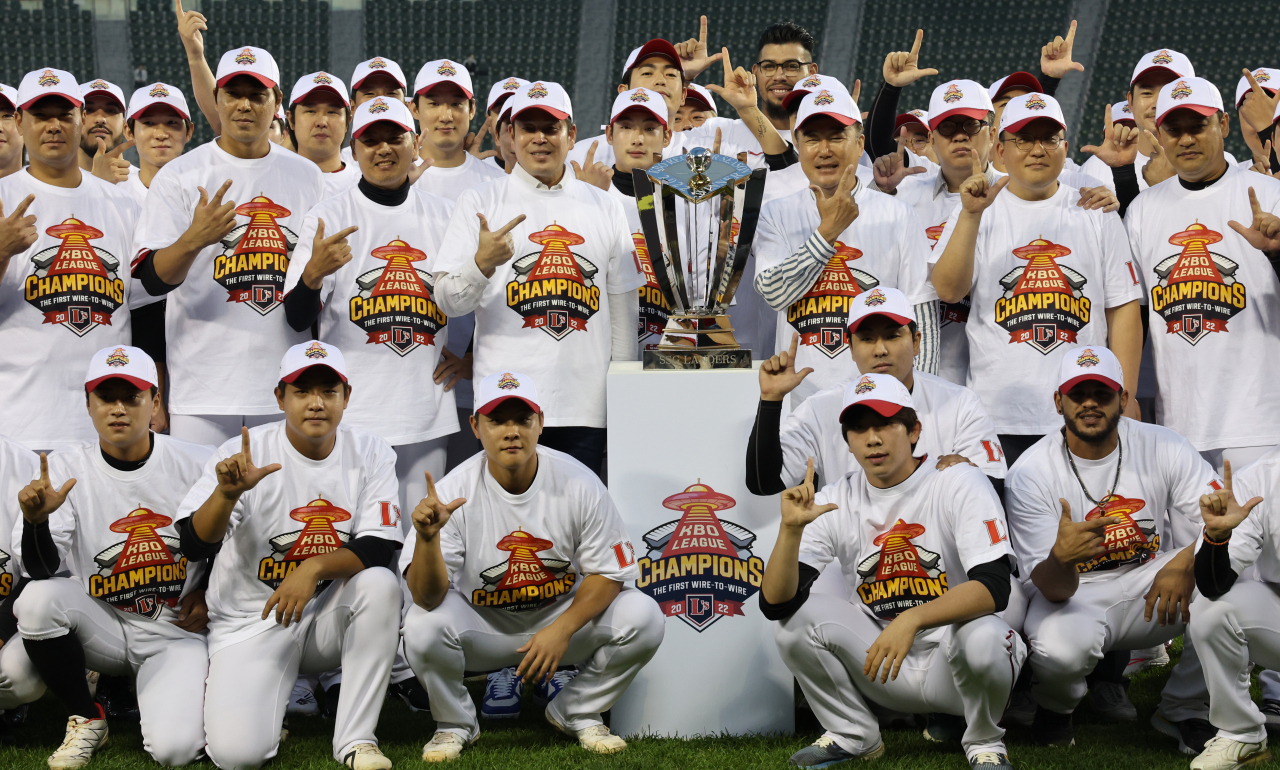 In this file photo from Oct. 5, 2022, SSG Landers players and coaches celebrate their Korea Baseball Organization regular season title before a road game against the Doosan Bears at Jamsil Baseball Stadium in Seoul. (Yonhap)

After running the table in the South Korean baseball regular season, the SSG Landers will now try to cap off the historic journey by winning the championship series starting Tuesday.

The Landers will take on the Kiwoom Heroes in the best-of-seven Korean Series, with the crown for the Korea Baseball Organization champions at stake. Game 1 starts at 6:30 p.m. Tuesday at Incheon SSG Landers Field in Incheon, just west of Seoul.

By virtue of posting the best regular season record, the Landers will have the home field advantage and will host Games 1 and 2, and, if necessary, 5, 6 and 7. The Heroes, the No. 3 seed who passed through two playoff rounds to reach the Korean Series, will host Games 3 and 4 at Gocheok Sky Dome in Seoul.

The Landers won the season series 11-5.

The Landers received a bye to the Korean Series and have not played since their final regular season game on Oct. 8. And likely aided by that extra rest, the top-seeded teams have dominated the recent Korean Series, having lifted the trophy on 18 out of the past 20 occasions, from 2002 to 2021.

The Heroes have played nine high-stakes postseason games in a 13-day span, from Oct. 16 to last Friday, eliminating the KT Wiz and the LG Twins over the two previous rounds. They earned a three-day break by eliminating the Twins in four games in the last series Friday, and that sets up their starting rotation nicely, with their two aces, An Woo-jin and Eric Jokisch, both available early in the Korean Series.

The Heroes had the best starting pitching ERA in the regular season with 3.41, and the Landers were right behind them in second place at 3.44. They were led by a trio of former major leaguers: Kim Kwang-hyun, Wilmer Font and Shawn Morimando.

Both teams had some bullpen issues, especially late in the regular season. The Landers had the KBO's worst bullpen ERA from Sept. 1 and on with 7.07, and the Heroes were only marginally better at 5.01.

However, the Heroes' much-maligned relief corps has done yeoman's work in the postseason. In four games against the Twins, closer Kim Jae-woong tossed four shutout innings and recorded three saves, including a six-out save in Game 3. Starter-turned-reliever Choi Won-tae has been a revelation in a setup role, with 3 1/3 scoreless innings over two appearances. Sidearmer Kim Dong-hyeok also did not surrender a run in 2 2/3 frames in the previous series.

Offensively, the Heroes batted an uninspiring .234/.310/.354 against the Landers this season, ranking second-to-last in opponents' on-base plus slugging with .664.

The Landers feasted on the Heroes' pitching, though, batting .277/.357/.465 with 18 homers. The home run total and OPS were both the highest marks by any team against the Heroes.

Among individual players, Landers third baseman Choi Jeong belted out six home runs against the Heroes. Former big league All-Star Choo Shin-soo had a .433 on-base percentage in 13 games against them.

Lee has been on fire the entire postseason. He was voted the MVP of the previous series after batting .500/.529/.938. He has yet to strike out in 40 plate appearances this postseason.

Puig has been no slouch, either, as he finished second to Lee in the MVP voting after leading the Heroes with two homers and five RBIs.

Between Kim Kwang-hyun, Choo Shin-soo, Lee Jung-hoo and Yasiel Puig, there will be no shortage of star power in this series.

The Heroes and the Twins sold out every game in the previous series. The Landers led the regular season in attendance with 981,546 fans, for an average of over 13,600. The Landers also had the most sellouts with three at their 23,000-seat ballpark. (Yonhap)