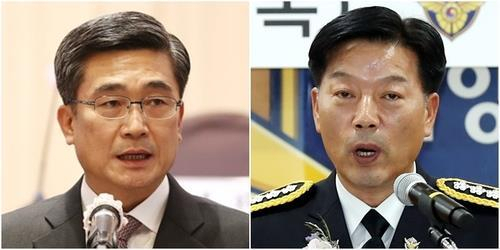 A Seoul court is set to hold hearings Friday to decide whether to issue arrest warrants for former Defense Minister Suh Wook and former Coast Guard Commissioner General Kim Hong-hee in connection with the previous administration's handling of the 2020 death of a fisheries official at the hands of North Korea, officials said.

The Seoul Central District Court will hold hearings for the two, and the decision is expected later in the day or early Saturday.

The two are facing various charges, including dereliction of duty, abuse of power and creating false official documents in connection with the Moon Jae-in administration's conclusion without sufficient evidence that the fisheries official was killed while attempting to defect to the North.

Critics have accused the Moon administration of drawing the conclusion to curry favor with Pyongyang.

Prosecutors suspect Suh deliberately erased intelligence reports that suggest the official, Lee Dae-jun, did not intend to defect and ordered officials to write false facts for a report for the Joint Chiefs of Staff.

Kim -- who was responsible for an investigation into the death at the time -- is under suspicion of using fabricated facts to conclude that Lee had intended to defect.

Both of them denied the allegations during the prosecution questioning, according to sources.

The 47-year-old fisheries official was fatally shot by the North's coast guard near the Yellow Sea border between the two Koreas, a day after going missing while on duty on board a fishery inspection vessel.

The Moon government concluded the official was shot and killed while trying to defect to the North. But the Coast Guard and the military reversed the conclusion in June, saying there was no evidence to suggest such motives.

Earlier, the state auditor also requested the prosecution to investigate 20 people, including top security officials of the previous government, on charges of covering up and distorting facts in the case.