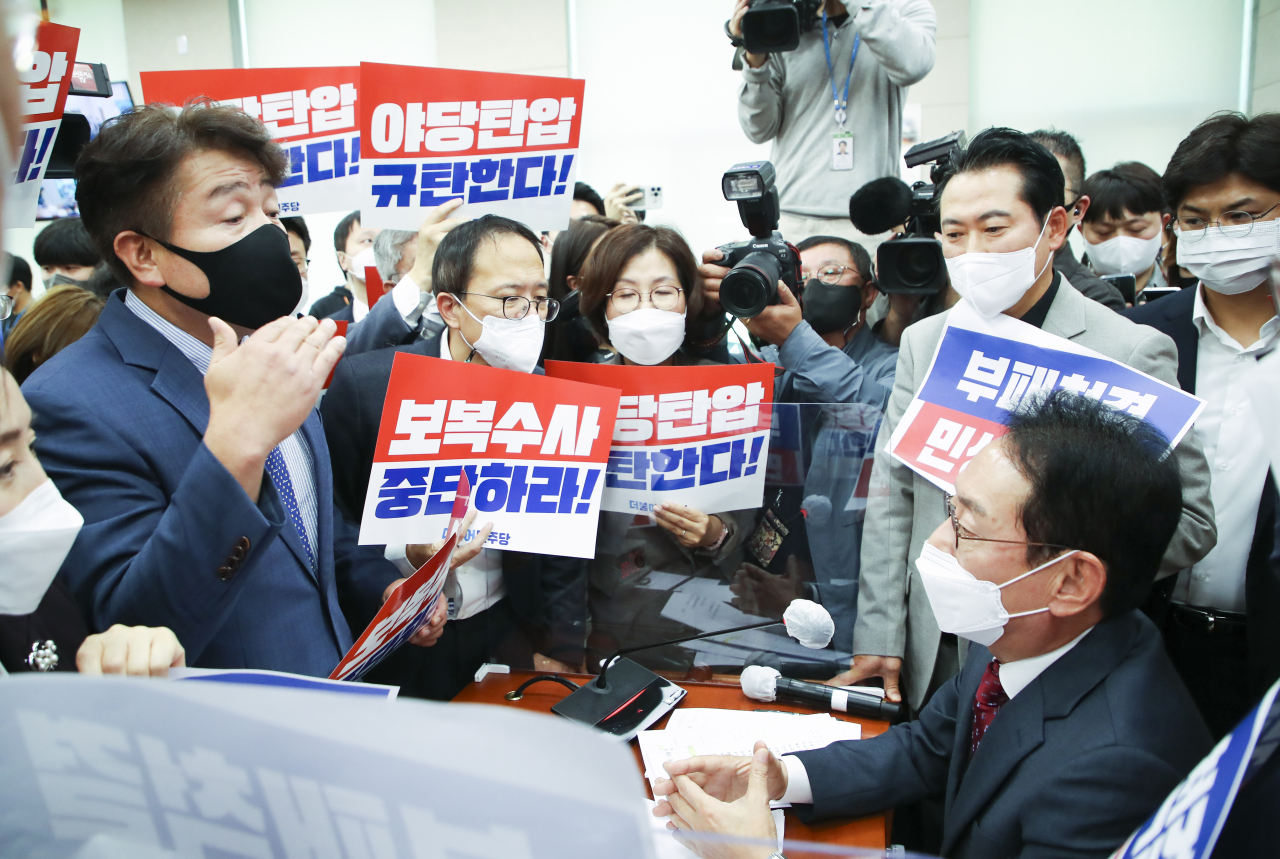 Lawmakers of the Democratic Party of Korea protest to legislative committee chairman Rep. Kim Do-eup (right) about launching a committee audit without mutual consent, Thursday. Banners read “Stop retaliatory investigation” and “We deplore the persecution of the opposition party.” (Yonhap)

The fallout from the probe surrounding the main opposition Democratic Party of Korea’s leader hit the political arena Thursday, with Democratic Party lawmakers demanding certain conditions be met for a parliamentary audit to proceed, reiterating that the party is facing "political oppression."

The Democratic Party halted the Legislation and Judiciary Committee's audit of the Supreme Prosecutors' Office, demanding an end to what they call "retaliatory investigation" into its party chairman, Rep. Lee Jae-myung.

The Democratic Party's demands come a day after the prosecutor's office arrested a close aide of Lee, and attempted to search the party's headquarters in an alleged bribery case.

Earlier on Thursday, Lee accused the prosecutors' office of conducting its investigation with political intent, and the administration of political oppression.

"It is the first time in the history of the Republic of Korea to raid the main opposition party headquarters during a parliamentary audit period. History is regressing," Lee said at an emergency general meeting Thursday morning.

“I swear that I have never used any illegal political funds,” Lee emphasized. He defended his confidant Kim Yong, who has been arrested.

“I have worked with Kim for a long time and still believe in his innocence,” Lee said.

“It’s a shame that the government is wasting the power that citizens have granted just to suppress the opposition party at such a grave time when the peninsula is facing a crisis due to North Korea’s provocations and unstable livelihoods,” he added.

On Wednesday, investigators tried to search the party's headquarters, but eventually withdrew after a standoff with lawmakers that lasted nearly eight hours.

The prosecution, which has been investigating corruption scandals involving the development of new cities in Wirye and Daejang-dong in Seongnam, Gyeonggi Province, arrested Kim Yong on Wednesday on suspicion of receiving 800 million won ($560,000) from private companies. Investigators suspect the money may have been used as political funds for Lee's presidential campaign. Kim is currently the vice president of the Democratic Party's think tank Institute for Democracy, and is considered to be one of Lee’s closest confidants.

The investigation into alleged corruption related to the development of Daejang-dong was originally focused on Lee's role, as he was mayor of Seongnam at the time, and on the damage caused to city in the process of private corporations taking excessive profits. With Kim’s arrest, however, the investigation has widened, bringing Lee's presidential election funds under scrutiny.

The ruling People Power Party, on the other hand, condemned the Democratic Party, saying that the opposition party interrupted the investigation team’s legal and fair inspection. “(The Democratic Party) should comply with the investigation if there really is nothing to hide,” urged Chung Jin-suk, interim chief of the People Power Party, through his social media on Thursday.

"When considering that media organizations were searched for several days when the current opposition party was the ruling party, the people would know whether (the claim of) political oppression is justifiable," Yoon said on his way to work Thursday. Yoon appears to have been referring to an investigation into alleged collusion between media and the prosecution that involved cable network Channel A being searched.

The prosecution, meanwhile, is speeding up the investigation by securing a statement from Yoo Dong-kyu, who claims to have given over 800 million won to Kim. However, the Democratic Party has raised doubts over the sincerity of Yoo’s statement, as he was released Thursday due to the expiration of his arrest period, although he has allegedly confessed to bribery.

After arresting Kim, the prosecution tried to conduct a search and seizure at Kim’s workplace, an office within the Democratic Party headquarters, on Wednesday afternoon. Democratic Party Floor Leader Park Hong-geun notified lawmakers of the situation, asked them to stop the ongoing parliamentary audit and held a rally at the party’s headquarters to secure the office.

Several standing committee audits were suspended, and dozens of Democratic Party lawmakers gathered in front of the party headquarters to confront prosecution officials. The party proposed to submit the requested data instead of submitting to a search, but the prosecution rejected the notion. After nearly eight hours of confrontation, the probe team had to withdraw from the scene at 10:47 p.m.

Former Justice Minister Rep. Park Beom-gye of the Democratic Party, who was at the forefront of the confrontation against the investigation team on Wednesday, said, "Since Kim is the vice president of the party’s internal organization, we have no choice but to interpret the prosecution’s attempt to search his office as targeting the entire party, not a private office."

Democratic Party lawmakers had pulled out from several audits on Wednesday in protest of the prosecution’s investigation. On Thursday, every parliamentary committee except the legislative committee resumed their audits.

The legislative committee remained in chaos. Lawmakers of the Democratic Party held a press conference in front of the committee meeting hall and claimed that they could not participate in the parliamentary audit unless a few conditions were met. They included a complete suspension of the search and seizure on the Democratic Party’s headquarters; an official apology from President Yoon and Justice Minister Han Dong-hoon; and the resignation of Prosecutor General Lee Won-seok.

Rep. Kim Do-eup, the chairman of the legislative committee, tried to resume the audit, but lawmakers of the Democratic Party protested that the committee should begin with mutual consent of the different parties. Kim eventually decided to postpone the meeting as turmoil continued.