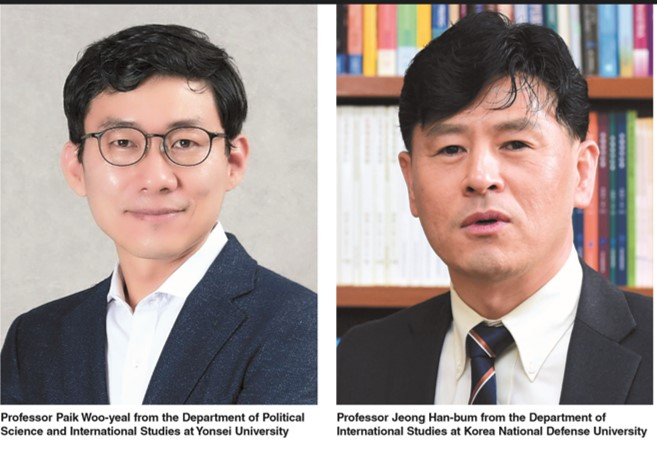 There are not many cases when Northeast Asia was under stable security. As China's path toward a military power and Japan's normalization are recognized as the regional arms race, mutual checks and confrontations are intensifying among countries in the region. Recently, North Korea launched multiple missiles and the regional security is fluctuating again at a time we cannot rule out the possibility of another nuclear test. At least, we could somewhat reduce the threat posed by North Korea in the past, as there were six-party talks as a mechanism to deal with North Korea's nuclear program. However, such efforts have gone to nothing due to North Korea's resistance and differences between the participants in the six-party talks. Meanwhile, neither China nor Japan has newly established or promoted multilateral cooperation in the region. Unlike the neighbors, Korea’s respective governments have continued to propose its own multilateral cooperation ideas. The proposals did not end as successful maybe because the practical environment was yet created or due to the problems of the driving force within the government itself. Nevertheless, it is necessary for Korea to reorganize its multilateral cooperation strategy by expanding its perspective to all regions outside Northeast Asia, namely Southeast Asia, Oceania, South Asia, and Northwest Europe, away from the fixed concepts and framework of Korea-China-Japan. Indeed, considering the US, which is the basis of Korea’s national security, we can still think of building bold strategic changes by comprehensively considering, organizing, and trying new combinations of other countries or approaches in accordance with policy areas within the traditional Asia-Pacific region. And the need for such multilateral cooperation is not diminishing at all. To continue the further discussion, this week’s interview invites professor Paik Woo-yeal at the Department of Political Science and International Studies of Yonsei University and professor Jeong Han-bum at Department of International Studies of Korea National Defense University.

Hwang: How would you assess the changes in current international affairs?

Jeong: It currently seems to be the end of liberal international order. Due to the decline of the US leadership, the rise of America first, the rapid rise of China, Russia's return to the international stage, and Japan's rearmament are underway. Additionally, the friendly countries such as Germany, India, and Saudi Arabia are strengthening their independent routes, which is becoming one of the centrifugal forces. Resolving the nuclear issues of Iran and North Korea has virtually failed. The proliferation of democracy in Iraq, Syria, and Afghanistan was also a failure. As multilateralism based on the liberal trade order declines and protectionism reappears as the US and China focus on economic security, international organizations such as the WTO are becoming nominal.

Hwang: What about the changes in the East Asian circumstances?

Jeong: China's rapid growth is an opportunity for the prosperity of East Asia, but at the same time, it is creating security instability due to its competition for power. On the other hand, Japan has lost its confidence because of its prolonged slump, the lost 30 years. In the case of North Korea, it is continuing to threaten nuclear development while maintaining its closed society by consolidating its power over the three-generation hereditary succession. The US and China have ended up in a win-win relationship that was based on the international division of labor, and the US is starting to contain China in earnest with the Indo-Pacific Strategy.

Hwang: How do you see Korea’s diplomatic and security environment?

Jeong: Korea is buried under the structure of the "US-ROK alliance on North Korea" and "the US global strategy or the US-China hegemony competition." There is no discourse and strategy on the collapse of the liberal order, the hegemonic competition, the return of Russia, and Japan's attempt to be the military power. We need to build a strategic thinking to lead this country in the future international community. There is a need for multilateral diplomacy and a way to overcome the dilemma in an environment where it is difficult to implement multilateral diplomacy. Therefore, the need for multilateral diplomacy is rather increasing due to the emergence of US-China strategic competition and protectionism.

Hwang: How is the discussion on multilateral cooperation in the region going on?

Paik: In general, several policies were established during the Kim Dae-jung government, including the 1997 ASEAN+3 Forum. It includes India, Australia and New Zealand along with 13 other countries and functions as the basic structure for East Asian multilateral cooperation with the East Asia Summit, where the US and Russia participated in earnest since 2010.

Hwang: When was a time Korea took the initiative in promoting multilateral cooperation in East Asia?

Paik: We can find the origin of Korea’s initiative in multilateral cooperation from the Kim Dae-jung and Park Geun-hye governments. The Park government’s "Northeast Asian Peace and Cooperation Initiative" could be more clarified, as it went through several East Asian diplomatic strategies in the Lee Myung-bak and Roh Moo-hyun governments. Then most of this initiative was inherited into the "Northeast Asian Platform for Peace and Cooperation" by the Moon Jae-in government, which basically maintained the continuity of multilateral cooperation in Northeast Asia. This means that regardless of conservative and liberal governments, this diplomatic strategy was supported as "bipartisan." In detail, eight Korea-China-Japan summits (the last in 2019), five Korea-China-Japan foreign minister talks (the last in 2015), and dozens of working-level talks were continuously held at Track 1 and 1.5.

Paik: Yes, this happens in accordance with the proliferation of exclusive mini-multilateral cooperation organizations based on blockages among like-minded countries due to the intensifying US-China competition, excessive politicization and securitization across the economy, science and technology, and human exchanges where the high quality of transition took place from the separation of politics and economy to the amalgamation of politics and economy, and low expectations or a perception at the level of disregard toward (North) East Asian multilateral cooperation within Korea and other countries (especially China and Japan). In addition, the deterioration of the three bilateral relations between the three countries (Korea-Japan, Korea-China, and Japan-China), especially the deterioration of the bilateral relationship between Korea and Japan, has a significant impact on the level of mini-multilateral cooperation in Northeast Asia.

Hwang: Nevertheless, what is the reason that such a multilateral cooperation attempt is necessary?

Paik: Above all, it is because Korea in 2022 does not perfectly fit into the others’ current "state capacity" and status or positions within and outside of the region, as the countries went through absolute and relative changes for a period and their respective situations are different. It is an undeniable fact, therefore, it is necessary to seek a practical form of East Asian multilateral cooperation strategy that is optimized for the environment-conditions of a completely new global, (North) East Asian region.

Jeong: We must consider an appropriate harmony of security interests that share strategic interests with the US and economic interests that share practical interests with China. As an ally, the US approaches the economy from a security perspective. Recent collaborations such as the Indo-Pacific Economic Framework and Chip 4 can be the typical example. This emphasis on economic security has been strengthened since the Ukraine war, while China is complaining that such cooperation is intended to exclude and contain China. The counterstrategy accordingly requires an approach that goes case by case and field by field based on national interest, rather than an all-or-nothing approach that follows one side either the US or China. In general, it is desirable to set military security in the direction of strengthening bilateral alliance with the US, and deal with economic security by setting joint responses with related countries.

Hwang: Please give us more specifics on what direction we should head toward multilateral cooperation.

Jeong: First of all, in order to solve the problem of sluggish cooperation due to the US-China strategic competition and intensifying conflict, we should actively take advantage of using the existing regional cooperation. In other words, in order to offset the negative effects that come from strategic competition between great powers, regional cooperatives such as the East Asia Summit and the ASEAN Regional Forum or other neutral actors such as ASEAN should be actively utilized. Complementarily, it is important to practice the "Trilateral Cooperation Vision for the Next Decade" agreed at the Eighth Korea-China-Japan Summit in Chengdu, China, in December 2019. If we decide to participate in the US-led economic and security consultative group due to the inevitable US-China strategic competition, we must put efforts to resolve the conflict with China. Korea, China and Japan are not only facing geographical proximity, but also will lose if the conflict escalates because of the economic interdependence. In order to eliminate unnecessary misunderstandings between the three countries and promote cooperation, it is necessary to regularize cooperation, including the regularization of the trilateral summit. In order to accelerate negotiations on the Regional Comprehensive Economic Partnership and the Korea-China-Japan Free Trade Agreement, and to promote cooperation and friendship among future generations of Korea-China-Japan, it is essential to promote youth exchanges as well.

Hwang: Beyond the existing inertia, what can be the most realistic, viable and interdependent way for multilateral cooperation in the mid-to-long-term?

Paik: The most important breakthrough of inertia is Korea breaking out of the existing form of Korea-China-Japan trilateral cooperation. Of course, this does not mean that Korea should abolish some of the achievements established so far, namely, the Korea-China-Japan Summit or the Trilateral Cooperation Secretariat. I am saying that the trilateral cooperation mechanism which was similarly established can be revived in accordance with appropriate global and regional environmental changes. However, although Korea is the one that desires for Korea-Japan-China trilateral cooperation the most, we must remind that China and Japan do not count Korea's utilization high in the system, and even Korea is facing intensified bilateral conflicts with Japan and China.

Hwang: Do you see the relationship between Korea and Japan as the biggest problem facing the Korea-China-Japan cooperation.

Hwang: Do you have any other words to add?

Jeong: The possibility of global multilateral cooperation is decreasing and the possibility of regional mini-multilateral cooperation is increasing. In principle, it is necessary to be wary of getting caught up in strategic competition between great powers. In situations where choices are inevitably forced, policies must be decided from the standpoint of national interest, and policy decisions that aim not to fall behind in the US-led international order must come first. In the direction of strengthening bilateral alliances with the US, participation in US-led supply chains and value chains related to economic security is desirable, if possible. However, participation in regional military and security consultative groups that target China should be cautious. The problem with China must be solved through another separate kind of effort. There can be active cooperation with Japan on the economy, but we should tread carefully on security issues. Also, we need to actively use the existing regional consultative groups in preparation for more intensified strategic competition in the region in the future. To complement that, the Korea-Japan-China regional cooperation agreed upon at the Korea-China-Japan summit should be promoted. Apart from the Korea-US-Japan cooperation, it is also important to run Korea-China-Japan cooperation in parallel.

Hwang Jae-ho is a professor of international studies at Hankuk University of Foreign Studies. He is also the director of the Institute for Global Strategy and Cooperation. This discussion was assisted by researchers Ko Sung-hwah and Shin Eui-chan.