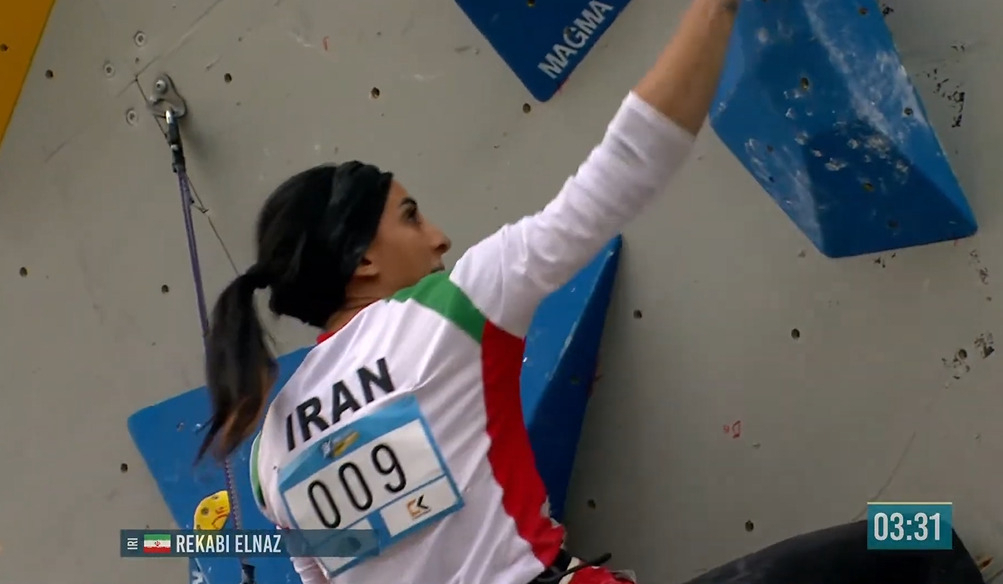 Iranian sport climber Elnaz Rekabi, who competed in a climbing championship in Seoul on Sunday without wearing a hijab, has flown back to Iran, the Iranian Embassy in Seoul said Tuesday.

“Ms. Elnaz Rekabi, who has participated in the final round of the Asian Climbing Competitions in Seoul, departed from Seoul to Iran in the early morning of October 18, 2022, along with the other members of the Team,” the embassy said in a statement.

“The Embassy of the Islamic Republic of Iran in South Korea strongly denies all the fake, false news and disinformation regarding Ms. Elnaz Rekabi,” the embassy statement added.

The statement comes after the 33-year-old athlete’s whereabouts became a news topic amid speculation that she could face punishment in Iran for competing in the International Federation of Sport Climbing's Asian Championships in Seoul without wearing the Islamic headscarf.

In Iran, women are required to wear a hijab.

Videos of hijab-less Rekabi at the competition went viral on social media, as many described her act as “brave” and “historic.”

But concerns began to grow over her safety on Tuesday after the BBC reported that she had gone missing in Seoul on Sunday. Multiple reports however emerged later that she left Seoul to head back home.

Seoul’s Ministry of Foreign Affairs has yet to establish facts regarding the safety of Rekabi as of Tuesday afternoon, an official at the ministry told The Korea Herald.

“If (she) fell victim to a crime in our country, our police would be in charge of the matter,” the official added.

The Korea Alpine Federation, an organizer of this year’s IFSC Asian Championships, also said they are unaware of Rekabi’s whereabouts, though they understand she has already left the country.

A staff member at Seoul Garden Hotel in western Seoul said she stayed at the hotel and checked out on Sunday.