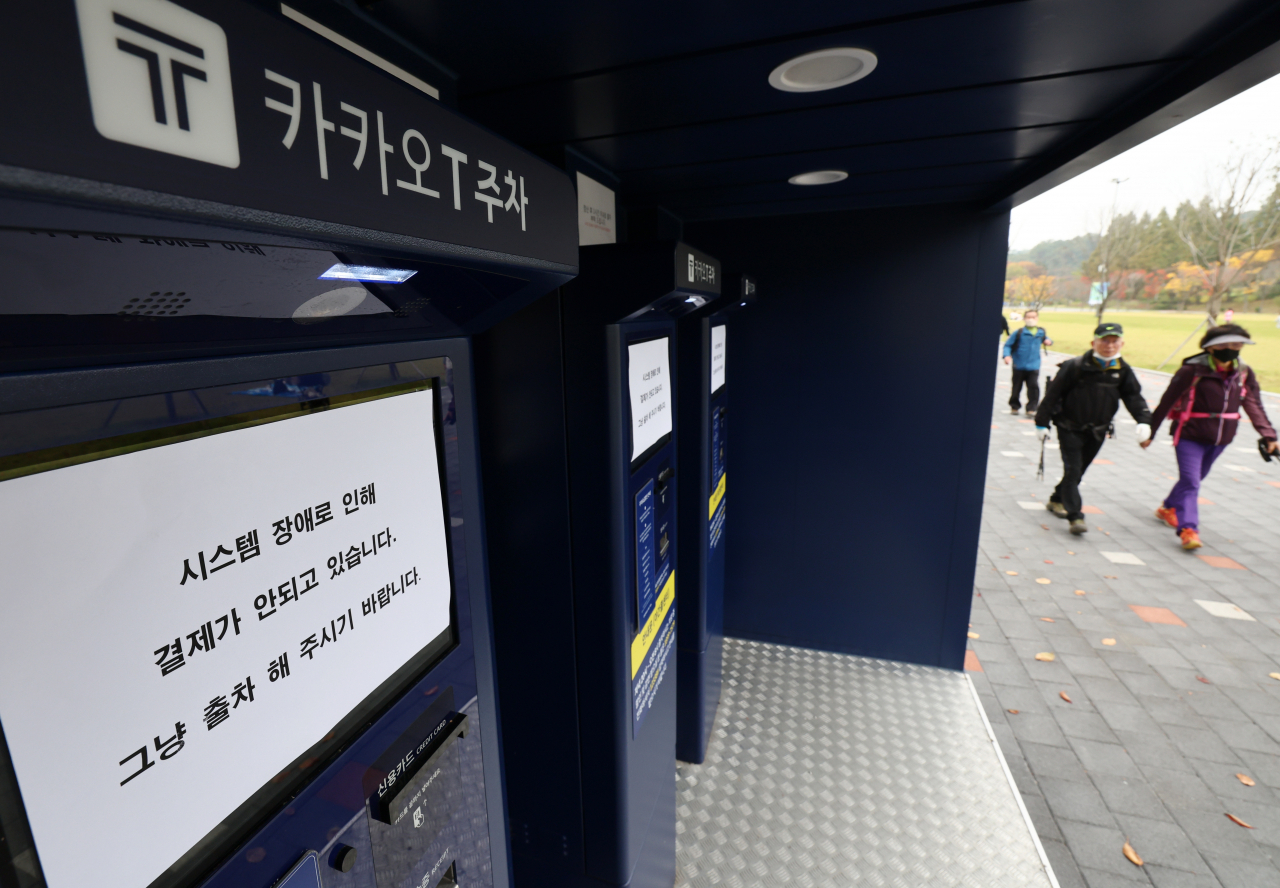 A notice was posted on an unmanned payment machine at a Kakao T parking lot in Gwacheon, Gyeonggi Province on Sunday to notify the system failure as service disruptions continued. (Yonhap)

President Yoon Suk-yeol expressed concerns about the service failures of the nation's most popular message app KakaoTalk in an emergency such as war, according to local media outlets Tuesday.

During a meeting of the president's chief secretaries on Monday, Yoon expressed concerns, asking what would happen KakaoTalk becomes unavailable in an emergency such as war as the majority of members of the public and public organizations use the service, according to Yonhap News agency, citing a senior presidential official.

This is interpreted as pointing out that the government did not properly recognize the influence of KakaoTalk as a de facto key communication network and that there were no countermeasures for its paralysis in an emergency.

As an extension, Yoon instructed his officials to find out the exact circumstances and improve the system to prevent a recurrence.

Kakao is the nation’s most popular messaging app with 47.5 million monthly active users in Korea, more than 90 percent of South Korea's population of 51.74 million. The company's messaging, ride-hailing and other services suffered disruptions Saturday and Sunday due to a fire at a data center that prompted the outage.

Yoon did not reiterate the monopoly issue related to Kakao and Naver, which he mentioned in his regular morning interview on his way to work Monday, according to the media outlet.

When asked whether there is any room for the government to discuss improvements given Kakao’s near-monopolistic market share, Yoon told reporters Monday morning, "I have a free market economic mindset that respects corporate autonomy and creativity, but that is based on the premise that the market itself has reasonably allocated resources and income in a system of fair competition."

"I understand that the Fair Trade Commission is looking at the matter,” he added.

An official from the presidential office said in a briefing Monday afternoon, "I did not think that he was referring to specific matters," adding, "He said something in principle.” But industry watchers say that the Fair Trade Commission could conduct a major investigation or system improvement on large platform operators such as Kakao and Naver.