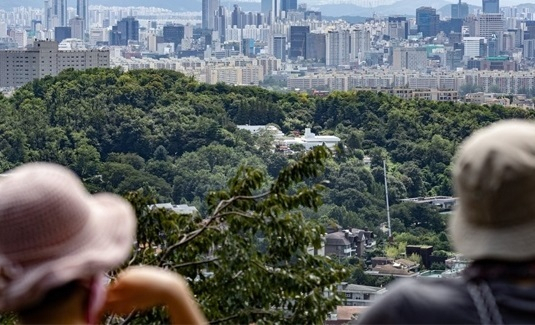 President Yoon Suk-yeol is likely to move into the new presidential residence in Hannam-dong, Yongsan-gu, Seoul, within this month after a monthslong delay.

Yoon has been commuting to work from his home in Seocho-gu, southern Seoul since his inauguration in May.

An official from the presidential office said at a briefing on Monday, "We are currently conducting a final inspection of the security and safety (for the relocation)."

Most of the construction at his official residence in Hannam-dong was completed around July, but completion was delayed due to security reinforcements that had to be made.

Last week, when reporters asked when he would move to Hannam-dong, Yoon said that it is not an important issue. "It seems that some safety devices are now in place, so I have to prepare for the move, but (I’m) too busy."

When Yoon was elected, he confirmed that the presidential residence would be the foreign minister's official residence in Hannam-dong, and that he would move in June.

In the meantime, the main opposition Democratic Party of Korea took issue with the government making a private contract with a construction company for a government building. This is among the reasons it opposes the relocation of the presidential office to Yongsan-gu. The opposition has criticized Yoon, saying, “The cost of relocating his residence is increasing.”

Yoon's private residence in Seocho-gu is highly likely to be maintained for the time being rather than being sold.