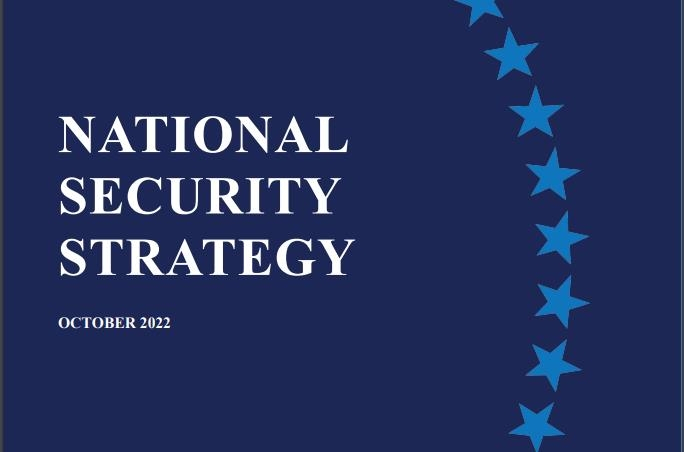 The captured image shows the cover of the US National Security Strategy released by the White House on Wednesday. (Yonhap)

WASHINGTON -- The United States reaffirmed its commitment to completely denuclearize the Korean Peninsula through diplomacy in its latest national security strategy released Wednesday that focused largely on how it will handle its growing competition with China.

It said the country will continue to enhance and expand its alliances to achieve both ends.

"The Democratic People's Republic of Korea (DPRK) continues to expand its illicit nuclear weapons and missile programs," said the new National Security Strategy released by the White House, referring to North Korea by its official name.

"We will seek sustained diplomacy with North Korea to make tangible progress toward the complete denuclearization of the Korean Peninsula, while strengthening extended deterrence in the face of North Korean weapons of mass destruction and missile threats," it added.

North Korea staged more than two dozen missile tests this year, including seven rounds of missile launches over the past two weeks.

"The 2022 National Security Strategy outlines how my Administration will seize this decisive decade to advance America's vital interests, position the United States to outmaneuver our geopolitical competitors, tackle shared challenges, and set our world firmly on a path toward a brighter and more hopeful tomorrow," he was quoted as saying.

"This is a 360-degree strategy grounded in the world as it is today, laying out the future we seek, and providing a roadmap for how we will achieve it," he added, according to the White House.

"We have put alliances at the core of this strategy," he said in a telephonic press briefing.

"The president speaks often about the contest in the world between democracy and autocracy and our democratic allies in Europe, in Asia and other parts of the world are core to the vision behind the strategy," he added.

Sullivan insisted the US is already increasing its investment in alliances, especially in the Indo-Pacific region, which the National Security Strategy said will be "the epicenter of 21st century geopolitics."

"In the Indo Pacific, we have reaffirmed our ironclad commitments to our treaty allies, lifted our alliances with Japan, South Korea and Australia to new levels of vitality," he said while speaking later at a seminar co-hosted by Georgetown University School of Foreign Service and the Center for a New American Security, a Washington-based think tank.

"All of these steps we take at home are force multiplied by another core source of American power, our alliances," he added. "If there's anything that is a core hallmark of Joe Biden's approaches to the world, it is an investment in America's allies." (Yonhap)