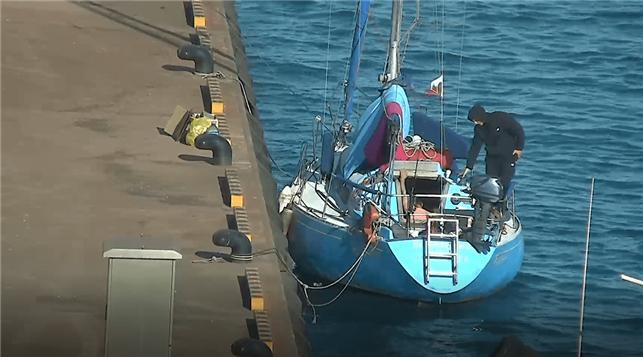 South Korea refused entry to Russians who sailed into South Korean waters by yacht last week, according to Democratic Party of Korea Rep. Ahn Ho-young. (Yonhap)
Diplomatic and other questions are being raised for South Korea, as Russians trying to avoid conscription into Russia's invasion of Ukraine are anticipated to head to the country to seek asylum.

Over the first few days of October, five yachts carrying Russian passengers were spotted in South Korean waters, according to Coast Guard data submitted to the office of Democratic Party of Korea Rep. Ahn Ho-young.

Four of the yachts docked at South Korean ports applying for entry, but all aboard were sent back except two people who previously visited South Korea. The lawmaker said 22 out of 23 were young men, mostly in their 20s and 30s.

Ahn said in a release that as more people may be fleeing Russia, South Korea -- as one of their likely destinations -- should come up with protocols reflecting diplomatic and human rights concerns.

“Although official statistics aren’t available at this point, it seems more Russians have been sailing into our waters in recent weeks,” a Coast Guard officer told The Korea Herald on Wednesday, suggesting that they appeared to be among the exodus of Russian men resisting Putin’s calls to fight in Ukraine.

Based on the official announcements so far it isn’t clear if the Russians on yachts were in fact fleeing their country because they did not want to fight the war, and if they intended to claim refugee status.

In a phone call Wednesday with The Korea Herald, a senior Ministry of Justice official declined to confirm whether any of the Russians who arrived by yacht had applied for refugee protection. He said the laws on refugees keep that information discreet.

“They were denied entry after they were screened for immigration as per the usual protocols, and found to have not met the requirements,” he said. “Everything was handled according to the South Korean immigration procedures and policies.”

The official said the Russians did not have the relevant visa or visa-free permit, the Korea Electronic Travel Authorization.

South Korea’s agreement with Russia allows for mutual visa-free entry for up to 90 days. Russians visiting for purposes other than employment, residence or studying, however, must obtain a K-ETA in advance.

Shin Hee-seok, an international law expert with the Transitional Justice Working Group, said that under normal circumstances, someone trying to evade conscription would not qualify for a refugee protection for that reason alone.

He said that according to the related convention, to which South Korea is a signatory, a refugee would be someone who faces possible persecution for reasons of race, religion or political opinion when returning to the country of origin.

“If they were looking to avoid military service, I don’t see that as necessarily constituting a refugee status. They could be recognized as refugees if, for instance, they were coming to apply for protection after voicing dissent against the war in Ukraine,” he said.

“We don’t know if the Russians who sailed their way over here were asking to apply for refugee status. But if they were, I don’t think taking them in would have hurt our ties with Russia,” said Lee Sang-joon, a professor specializing in South Korea-Russia relations at Kookmin University.

“South Korea is already a country that accepts very few refugees,” he pointed out.

He said South Korea has received Koryoin people -- ethnic Koreans living in post-Soviet countries -- from Ukraine, but that the country could show more willingness to let non-ethnic refugees in during the war from a humanitarian standpoint.

“I think now may be a good time for us to revisit our standards,” he said. “We could open our doors to Russian IT workers who have been leaving their country en masse, and Putin opponents or those otherwise seeking political asylum.”