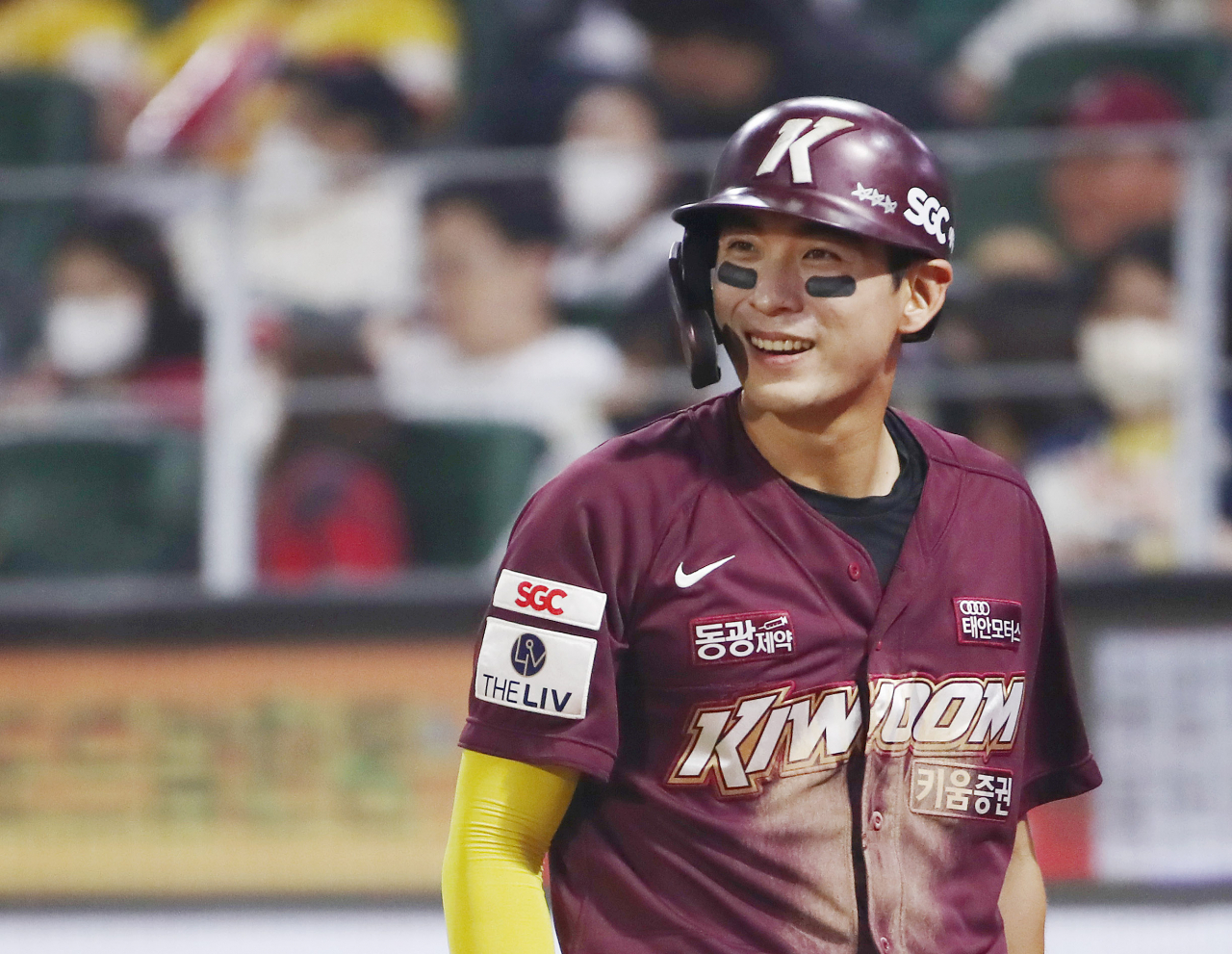 In this file photo from Sept. 30, Lee Jung-hoo of the Kiwoom Heroes smiles after scoring a run against the SSG Landers during the top of the 10th inning of a Korea Baseball Organization regular season game at Incheon SSG Landers Field in Incheon, some 30 kilometers west of Seoul. (Yonhap)

The 2022 Korea Baseball Organization (KBO) regular season drew to a conclusion Tuesday night with a makeup game between the KT Wiz and the LG Twins. Lee and the Heroes had finished their campaign Saturday, and the 24-year-old outfielder had locked down some individual trophies before the last game of the season.

Lee won his second straight batting title with a .349 average and also led the league in RBIs (113), falling one category, home runs, shy of a batting Triple Crown.

Lee led everyone in the two other triple slash categories, with a .421 on-base percentage and a .575 slugging percentage. He edged out Jose Pirela of the Samsung Lions by one for the lead in hits, 193-192.

At the end of each season, the KBO hands out trophies to leaders of eight hitting categories: batting average, home runs, RBIs, runs, hits, steals, on-base percentage and slugging percentage. Lee is the first KBO hitter in 12 years to lead the league in at least five of those categories.

The senior Lee won the MVP that season, and his son will likely bring the second MVP trophy to the family this year.

A soon-to-be member of the extended Lee family led the KBO in saves this year. LG Twins closer Go Woo-suk, who will marry Lee Jung-hoo's younger sister in January, recorded a career-high 42 saves to lead all relievers.

Park, who was once on pace for 50 home runs before cooling off in the second half and missing nearly a month with an injury, captured his sixth career home run title -- breaking a tie with Lee Seung-yuop for most home run crowns in KBO history.

On the pitching side, the KBO has trophies for wins, ERA, strikeouts, saves, holds and winning percentage.

Heroes ace An Woo-jin came up one category short of a Triple Crown, as he led everyone with a 2.11 ERA and 224 strikeouts -- the second-most strikeouts in a season in KBO history, after 225 recorded by Ariel Miranda of the Doosan Bears last year.

Casey Kelly of the Twins was the leader with 16 wins, one ahead of his teammate, Adam Plutko, and An.

Another Twins pitcher, Jung Woo-young, was tops with a career-best 35 holds.

By going 11-2, KT Wiz right-hander Um Sang-back finished with the highest winning percentage among all qualified pitchers with .846. (Yonhap)