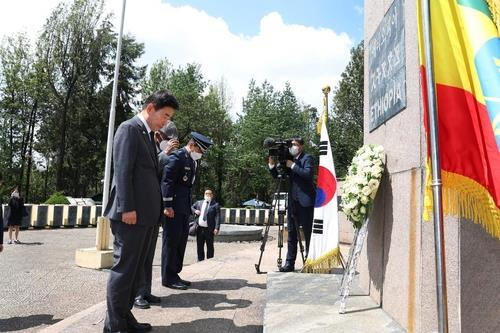 National Assembly Speaker Kim Jin-pyo (L) pays respect to Ethiopian veterans that fought for South Korea in the 1950-53 Korean War in front of the Korean War Memorial in Addis Ababa on Monday, in this photo provided by Kim's office. (Kim Jin-pyo's office)

ADDIS ABABA -- National Assembly Speaker Kim Jin-pyo has met with Ethiopian veterans of the 1950-53 Korean War and honored their sacrifice.

"Ethiopians showed they were brave soldiers. ... I pay deep respect to their comradeship that brought all 122 of the fallen soldiers back home," Kim said, adding he will work hard to improve ties between the two countries.

Ethiopia sent 6,037 soldiers to the Korean Peninsula during the war, where 122 of them were killed and around 530 injured.

Kim plans to head to Rwanda on Tuesday to attend a general meeting of the Inter-Parliamentary Union and travel to the United Arab Emirates on Thursday.