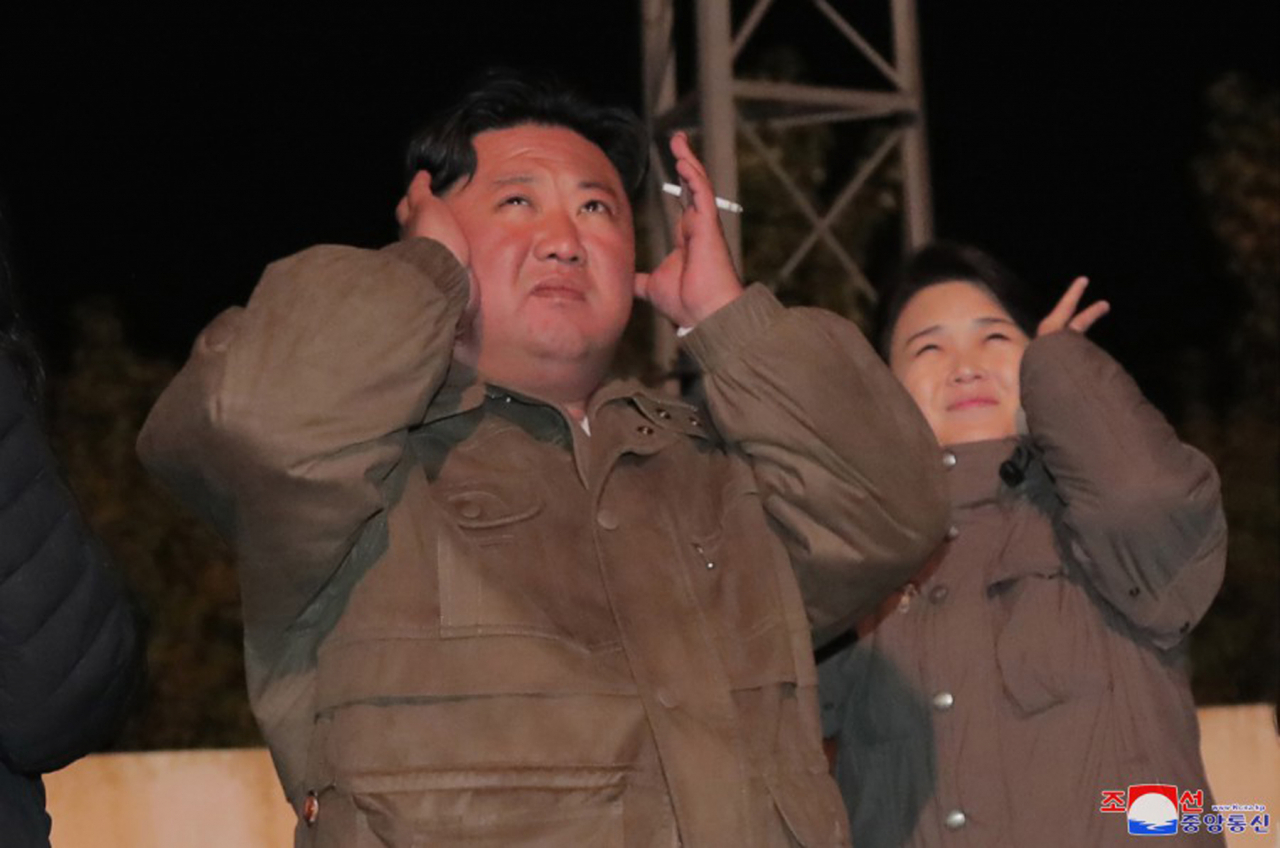 North Korean leader Kim Jong-un (left) covers his ears with his wife Ri Sol-ju during an inspection of major drills in this photo provided by the North's Korean Central News Agency on Monday. (Yonhap)

Leading a “field inspection” of the military drill conducted from Sept. 25 to Sunday, Kim also said there is no need to speak with “enemies,” while blaming the United States and South Korea for raising military tension on the Korean Peninsula.

"Even at this very moment, we detect busy military movements of the enemies. The continuous, intentional and irresponsible actions by the US and South Korea that escalate tension will only lead to stronger response from us. We are closely looking at the crisis,” Kim was quoted as saying by the North's official Korean Central News Agency.

"The enemies are saying so and so about dialogue and negotiation (with us) when they continue to pose military threats. But we have nothing to talk about with the enemies nor do we feel the need to.”

Kim's statement comes as an apparent rejection of proposals made by South Korean President Yoon Suk-yeol and US President Joe Biden that promised economic benefits if the North comes to the negotiation table for denuclearization.

North Korean leader Kim Jong-un (front center) poses with military officials during his inspection of major drills in this photo provided by the Korean Central News Agency on Monday. (Yonhap)

The North carried out the weekslong military exercise as the US and South Korea staged a large-scale combined naval exercise in the East Sea, involving a nuclear-powered aircraft carrier, nuclear-powered submarine and an Aegis destroyer.

Noting the North's military training served as a way to verify its posture for war deterrent operations and also its preparedness in state nuclear defense, Kim said the drill comes as a "clear warning and demonstration" informing the enemies of Pyongyang's nuclear response posture and nuclear attack capabilities.

On Sept. 9, it also staged a simulation drill of launching a ballistic missile loaded with tactical nuclear warheads.

The KCNA also disclosed the ballistic missile drills on Sept. 25 in which the North Korean military simulated the loading of tactical nuclear warheads "at a silo under a reservoir" in a northwestern region.

The drills were aimed at confirming the process of the operation process of deploying tactical nuclear warheads, according to the KCNA.

The North Korean leader had previously called for the military to "redouble efforts" for the development of tactical nuclear weapons that can be loaded with smaller and lighter warheads, in January.

The North's rubber-stamp parliament also approved a new law to declare the state a nuclear power, seeking to legitimize a preemptive nuclear strike as a defensive measure.

Alongside the military training, North Korea has fired a dozen ballistic missiles recently, including an intermediate-range one that flew over Japan, prompting South Korea, the US and Japan to strengthen trilateral cooperation to respond to its provocations.

While North Korea's air force has been observed to sharply increase sorties since mid-May, it was also found to have sent out a sortie dubbed "mass-scale air strike training" using 150 warplanes on Saturday.

Yoon also highlighted that South Korea’s military will further bolster its combined defense posture through joint drills with the United States and security cooperation among South Korea, the US and Japan.