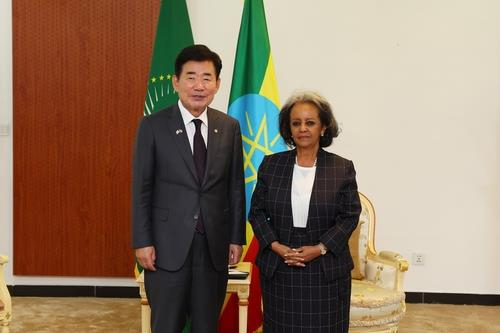 The talks took place on Sunday (Ethiopian time) as Kim was visiting the African country as part of his three-nation trip that will also take him to Rwanda and the United Arab Emirates. Kim's trip marked the first official visit to Ethiopia by a South Korean parliamentary chief since 2013.

Kim called for Ethiopia's support for South Korean businesses struggling with regulatory difficulties in the country while pledging to back Ethiopia's ongoing endeavors for economic development.

"When difficulties facing the existing businesses here are settled smoothly, investment by new businesses would be possible. I ask for active support in that regard," the speaker was quoted as saying.

Noting that Ethiopia is one of the biggest recipients of South Korea's official development assistance program, Kim said that Seoul will help the country realize its 10-year economic development scheme.

Kim also said that he would recommend South Korean President Yoon Suk-yeol officially invite the Ethiopian president to Seoul and that he himself would invite the parliamentary leaders of the African nation.

Zewde was quoted as telling Kim that she has been informed of regulatory difficulties South Korean companies have been facing and that she will instruct relevant government agencies to look at the issue.

During the meeting, Kim and Zewde stressed the two countries are allies "forged in blood." Ethiopia is the only country that sent ground forces in support of South Korea during the 1950-53 Korean War. (Yonhap)