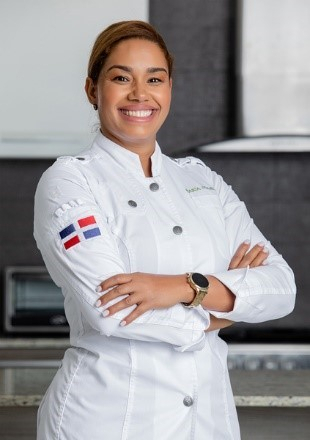 In celebration of the 60th anniversary of diplomatic relations between South Korea and the Dominican Republic, the Dominican Embassy in Seoul has invited two-star Michelin chef, Maria Marte, to introduce Dominican cuisines to Korea.

Hosted by the Four Seasons Hotel Seoul in Gwanghwamun, central Seoul, Marte has been introducing a series of Dominican dishes, desserts and cocktails, through the hotel's promotion, "Dominican Week," since Monday.

Dishes by Marte as well as Elaine De Windt, Laura Rizek, Nicole Baba and Edgard Severino are served at the hotel's restaurants and bars through Sunday.

"I have tried many Korean foods here, and I can say that the rich Korean flavors are amazing,” Marte told The Korea Herald, Thursday. “The Dominican Republic has high-quality herbs, spices and sauces. I think Korean soju can pair well with sancocho, traditional Dominican stew with meat and vegetables. I also want to add kimchi to my cuisine in the near future.”

Born in the Dominican Republic's Jarabacoa in 1976, Marte inherited her passion for cooking from her parents. Her mother is a pastry chef while her father is a restaurateur.

Marte climbed her way up from working as a dishwasher in 2003 at El Club Allard, a restaurant in Madrid, to becoming the head chef at the same restaurant after a decade, in 2013. Over the years, El Club Allard has become a popular restaurant, earning its first Michelin star in 2007, and its second in 2011. Marte is currently the only woman in Latin America to have earned two Michelin stars.

After receiving multiple prestigious culinary awards in Spain, Marte returned home in 2018, creating a foundation to help women in the Dominican Republic learn professional skills and gain opportunities to advance in society.

Dinner with cocktail pairings based on rum distilled from sugar cane, the main crop of the Dominican Republic, will be showcased Saturday evening at the hotel's speakeasy bar, Charles H.

At Confections by Four Seasons, the lobby floor bakery, mini cakes made of quality cacao produced from the Dominican Republic are available through Sunday.