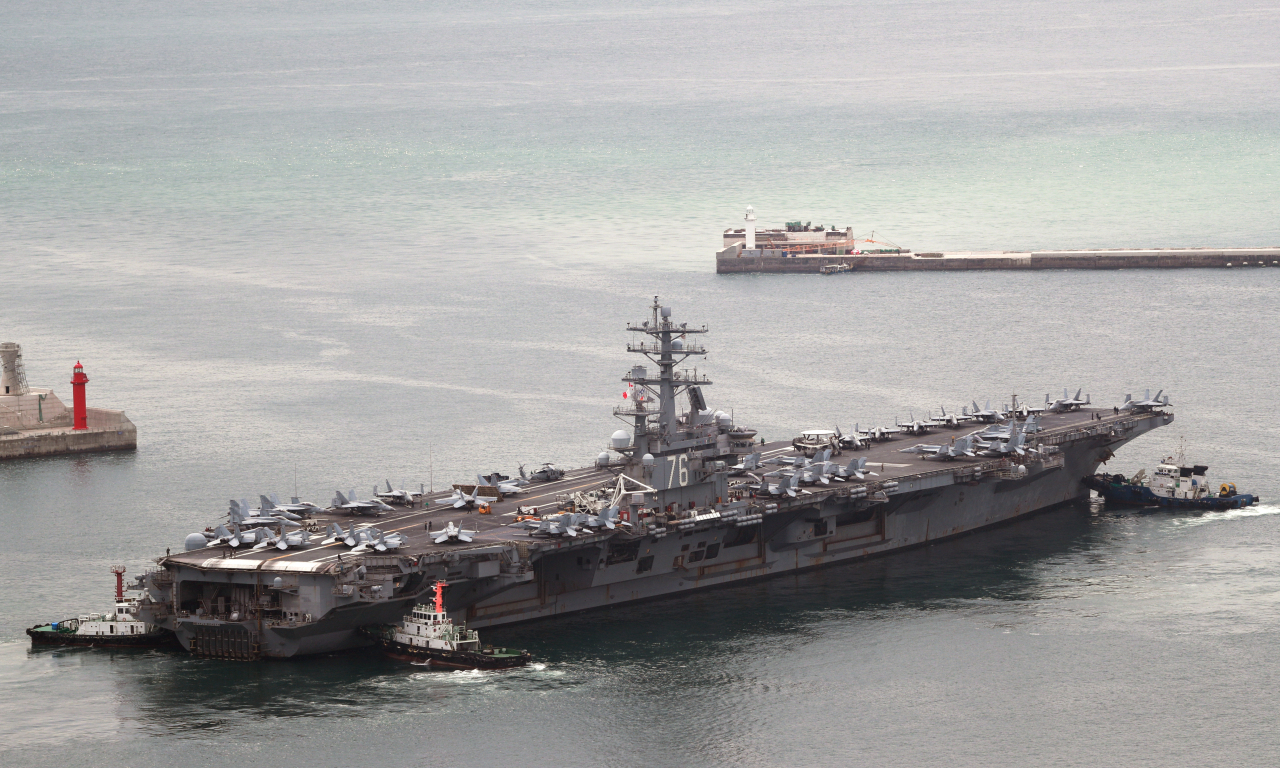 The US nuclear-powered aircraft carrier Ronald Reagan sails from a naval base in Busan, southeastern South Korea, on Sept. 26, as South Korea and the United States kicked off their first combined naval exercise, involving the American aircraft carrier, near the peninsula in five years. The four-day drills came as Seoul and Washington are cranking up security cooperation amid continued speculation that North Korea could engage in provocative acts, like a nuclear test or submarine-launched ballistic missile launch. (Yonhap)

North Korea condemned the United States Thursday for redeploying a US aircraft carrier into the waters east of South Korea, saying that the move poses a "grave" threat to stability in the region.

The North's foreign ministry made the condemnation in a public notice, a day after the USS Ronald Reagan aircraft carrier returned to waters near the Korean Peninsula for a joint exercise with South Korea and Japan following the North's firing of an intermediate-range ballistic missile (IRBM) earlier this week.

North Korea is "watching the US posing a serious threat to the stability of the situation on the Korean peninsula and in its vicinity by redeploying the carrier task force in the waters off the peninsula," the ministry said in the statement carried by the official Korean Central News Agency (KCNA).

The redeployment came after Pyongyang fired a ballistic missile over Japan on Tuesday, its first IRBM launch in eight months. The missile launch is widely viewed as the North's protest against Seoul and Washington's latest joint exercises.

The aircraft carrier left the waters last week after it engaged in a bilateral naval exercise with South Korea and then a trilateral drill also involving Japan.

North Korea also "strongly" condemned the US and its like-minded countries for seeking to refer what it called "counteraction measure" against the Seoul-Washington drills to the UN Security Council (UNSC).

The 15-member council met on Wednesday (US time) to discuss the North's latest provocation in an effort to discuss ways to strengthen UN sanctions against Pyongyang. (Yonhap)