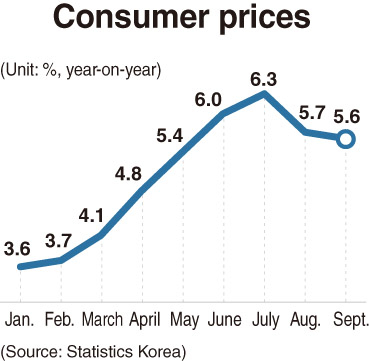 South Korea’s consumer prices eased in September for a second straight month, but the annual price increase is expected to stay as high as three times what the Bank of Korea sees as acceptable, the central bank said Wednesday, sharply increasing expectations of another 50 basis point rate hike next week.

According to Statistics Korea data on Wednesday, the September consumer price index rose 5.6 percent from the same month a year earlier, down from 5.7 percent in August, when it slowed for the first time in seven months. In July, inflation reached a 24-year high of 6.3 percent, well above the annual average of 2 percent the central bank seeks.

“A price slowdown in oil and agricultural products, like vegetables and fruit, led the dip in September,” a senior Statistics Korea official said, describing a sharp drop in oil prices as instrumental in blunting an overall price surge. Given no disruption to the lower oil prices, the July reading of 6.3 percent may have been the peak, the official added, though he expected inflation this year to average a little over 5 percent.

The inflation forecast was immediately supported by the BOK as it convened a meeting the same day to discuss a price trajectory ahead of its rate hike decision on Oct. 12 -- the first of two policy meetings left this year.

But the nuance in the way the central bank set out priorities upon learning the latest data seemed to have encouraged bets that it would back a second increase of 50 basis points since July when the seven-member board meets next week.

“Core inflation is still on the rise, and we expect prices to stay between a high 5 and 6 percent for the foreseeable future,” Deputy Gov. Lee Hwan-seok said in a statement that offered no hint of optimism. Lee warned that uncertainties, such as the US dollar’s rally, could prolong price elevation.

The quickly depreciating Korean won against the US dollar -- led by investors pricing in a US slowdown because of aggressive tightening to corral inflation there -- is fueling worries that Asia’s fourth-largest economy could be close to reliving the 1997 Asian financial crisis, when the International Monetary Fund stepped in for help.

But policymakers in Seoul have refused to entertain the thought of a currency crisis, with BOK Gov. Rhee Chang-yong openly dismissing a potential dollar shortage. Further, he contends that Korea could weather a gap as big as a full percentage point between the Korean and the US interest rates. The Korean rate, 2.5 percent for now, could climb to 3.5 percent by year-end on the most hawkish bets, compared to the 4.5 percent most investors expect from the US.

More importantly, economic fundamentals -- usually measured by performance in the current and goods accounts -- are still solid, according to the Finance Ministry and even the presidential office. In a rare direct intervention on Tuesday, President Yoon Suk-yeol told reporters that he expects to see a current account surplus for the year, despite the six-month trade deficit throughout September -- a losing streak that last took place in 1997, when an IMF bailout was approved in December.

The optimism, however, is overshadowed. Korea’s six-month current account surplus ending in June shrank in July in an 88 percent drop from the same month a year ago, while the goods account posted a deficit for the first time in July since January. For August, the current account is also expected to swing into deficit. Higher import bills prompted by a global surge in food and raw material costs are blamed.