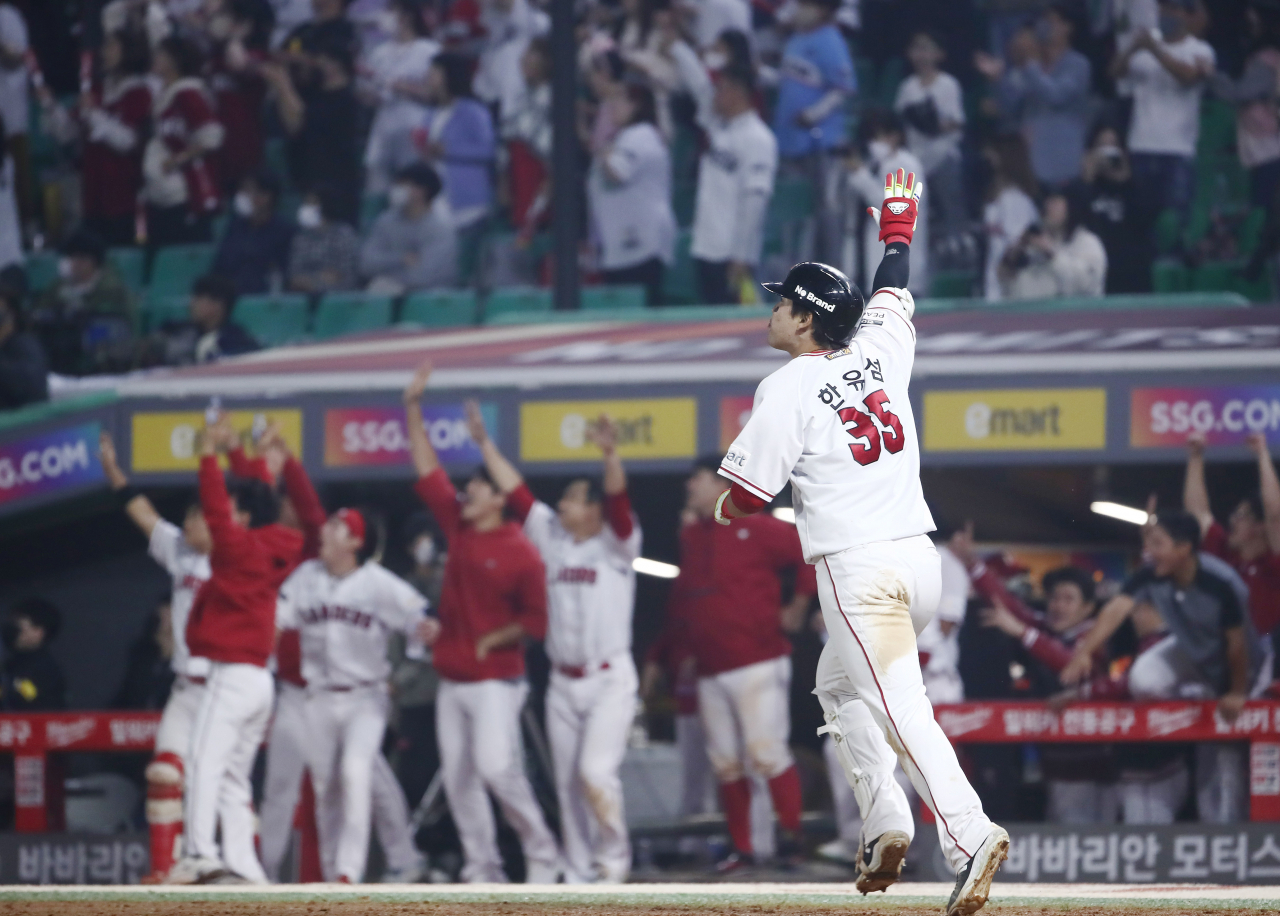 Han Yoo-seom of the SSG Landers celebrates his walkoff grand slam against the Kiwoom Heroes during the bottom of the 11th inning of a Korea Baseball Organization regular season game at Incheon SSG Landers Field in Incheon, 30 kilometers west of Seoul, on Sept. 30, 2022. (Yonhap)

The SSG Landers captured the South Korean baseball regular season title without even playing on Tuesday, becoming the first team in league history to go wire to wire for the direct ticket to the championship series.

The Landers, at 88-49-4 (wins-losses-ties), locked down first place in the Korea Baseball Organization (KBO), after second-place LG Twins suffered an 8-3 loss to the Kia Tigers on Tuesday night in Seoul.

The Landers, who didn't have a game Tuesday but will return to action Wednesday, moved four games ahead of the LG Twins (84-53-2) with three games left. The Twins have five more games to go but cannot catch the Landers even if they win out.

Ties don't come into equation when calculating winning percentage, which is wins divided by the number of games minus ties.

The Landers are the first team in KBO history to spend an entire regular season in first place. The Landers were only seriously threatened in two different stretches: in July, when the Kiwoom Heroes sat 1.5 games back, and in September, with the Twins closing the gap to 2.5 games.

Since 2002, only two teams, the 2018 Doosan Bears and the 2015 Samsung Lions, have failed to win the Korean Series after posting the best regular season record.

The Landers had a chance to clinch first place with a victory on Monday but they lost to last-place Hanwha Eagles 7-4. SSG starter Park Jong-hoon allowed five runs on four hits and three walks in the first inning, while retiring just two batters.

The Landers are leading the KBO with 716 runs scored and 135 home runs. On the mound, led by the league ERA leader Kim Kwang-hyun (1.99), who rejoined the franchise after a two-year stint with the St. Louis Cardinals, the Landers have the best starting rotation ERA at 3.38.