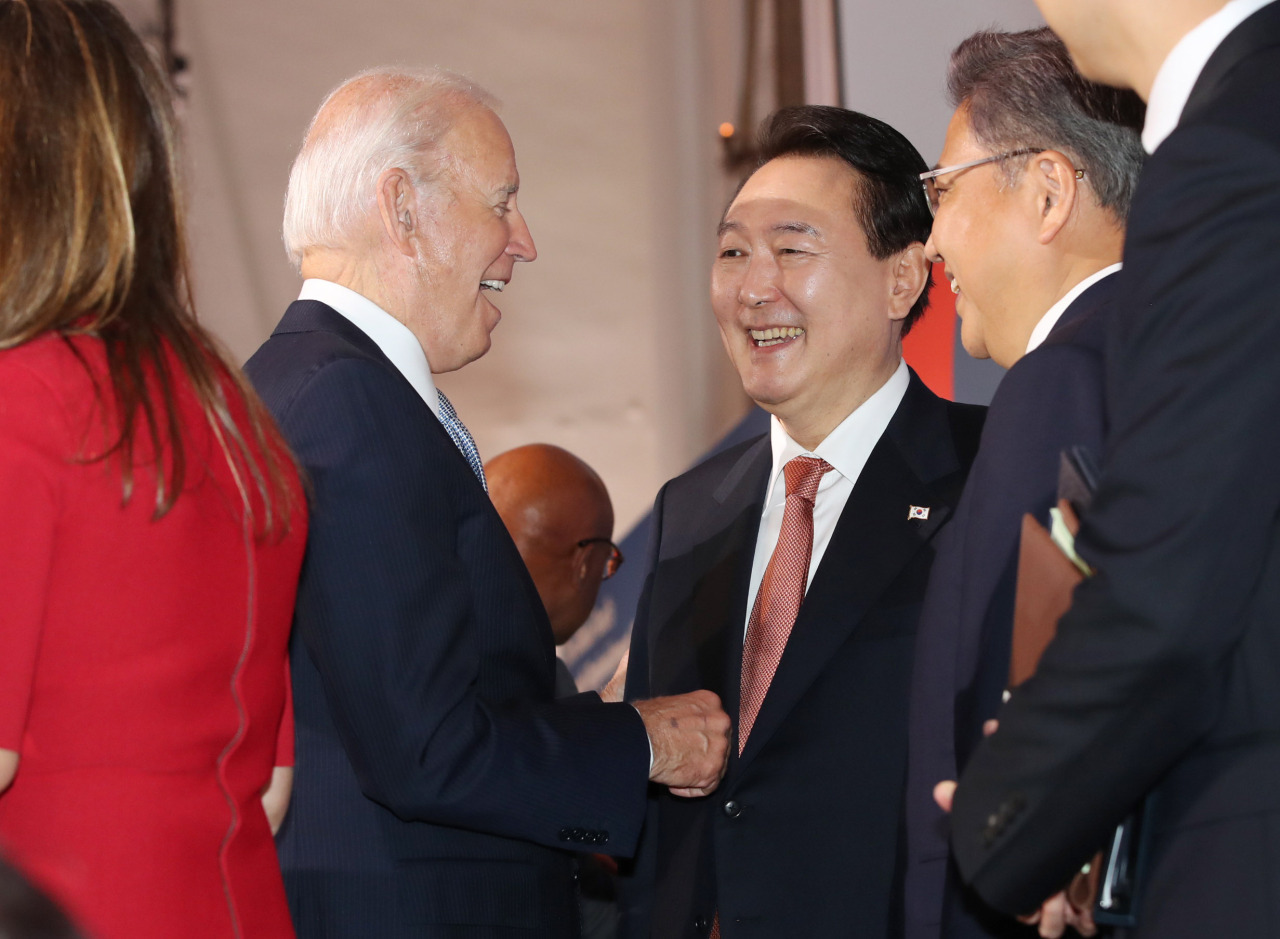 According to the South Korean broadcaster that was first to release the video footage, Yoon apparently told his aides, “Wouldn’t (inaudible) lose face if these ‘saeki’ do not pass it in the legislature?”

Many have speculated that the president was alluding to members of the US Congress, which his office has flatly denied. The remarks are said to have been about Biden’s pledge to raise the US contribution to the Global Fund, an initiative for fighting infectious diseases.

Yoon office has said the president was speaking about the South Korean parliament, not Biden or the Congress. But the verifiability aside, what does the word really mean?

Translations by English-language media outlets since have ranged vastly, from “idiots” -- the most widely understood version -- to even “f---ers” on rare instances, putting the Korean word at the center of a heated semantic debate.

Steven Capener, a Korean literature translator and professor of comparative literature at Seoul Women’s University, said his translation would probably fall somewhere in the middle.

“As to the translation as ‘idiots’ or ‘f---ers,’ it could be either or neither depending on a couple of things,” he said, such as the delivery by the speaker, the circumstances in which it was spoken and to whom it was referring.

“Personally, in this case I think the ‘idiots’ is too weak and ‘f---ers’ is too strong. I would do something like ‘dumbasses,’ because I felt a sense of derision coming from the president,” he said.

Another native English speaker, who wished to be unnamed and who has been translating Korean texts of various genres professionally for about seven years, said the word “does not have a direct equivalent in English.”

“These translators likely had very little time to come up with a good translation. Whatever it meant to them in the moment is what was written,” she said, adding that she didn’t think the versions that are out there accurately captured the meaning.

“I think we need a word that is as random and out of place, and adequately shocking as the (original) statement,” she said.

A professional Korean-to-English translator of more than 10 years said translating “saeki” as “f---ers” makes it “sound far more malicious than it really is.”

“I think the whole thing has been blown out of proportion, which is partly due to those translations, or mistranslations,” she said.

The nuance of the word “could be anything from derogatory to even endearing to almost a meaningless filler word, which I think was the case with Yoon,” she said. “It’s a highly versatile term for addressing someone in an informal setting, without necessarily meaning to offend.”

Asked how she would translate “saeki” in the context of how the president said it, she said, “These dudes, guys -- which is not strong enough, but better to tone things down if neither is 100 percent accurate anyway.”

Another bilingual translator said “saeki” is usually used in combination with other words to be offensive or sound vulgar.

“The word can still be pretty offensive by itself depending on the context. But my comment is based on the meaning and application of the word in general, which is why ‘f---ers’ feels a bit extreme,” she added.

A legal interpreter of Korean and English said, “The context is everything.”

“It’s certainly crass. But to be fair, he was overheard. In casual conversations, people call their friends that,” she said. “I would say that it’s almost in the mind of the beholder. Only Yoon can say what he meant by it.”

The National Institute of Korean Language gives three definitions for “saeki,” one of which states that it is a “crude way to refer to a person.” In the most literal sense, it is also a diminutive used to call one’s own child or a baby animal.

Shin Ji-young, a professor of Korean language at Korea University, said translation of the president’s remarks into foreign tongues “can only vary because here we are looking at the word’s pragmatic, not semantic, usage -- meaning that we are looking beyond its literal meaning.”

“In this case, as in many cases, we cannot strip the word of its context. The meaning that is perceived by listeners can only be shaped by the manner, time and place of an utterance,” she said.

“This is why it’s hard to reach a consensus, even among a Korean audience, on exactly what was meant.”