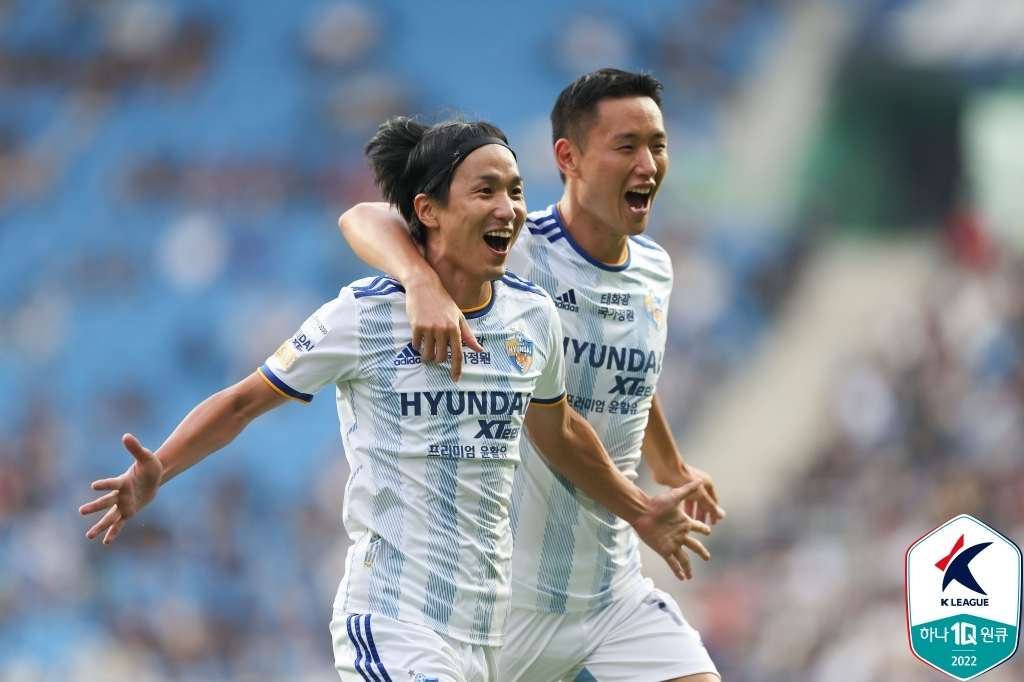 One match into the final phase of the 2022 K League 1 season following the three-day weekend, there has been no change at the top of the tables.

Ulsan Hyundai FC entered the split stage of the season leading Jeonbuk Hyundai Motors by five points. The two teams each won their matches last Saturday, and Ulsan continue to lead Jeonbuk by the same margin, 69-64.

The rivals will clash for one final time this season Saturday in the southeastern city of Ulsan.

After 33 matches, the top six clubs were paired into "Final A," and the rest ended up in "Final B." They will then play five more matches within their groups to finish out the campaign.

Ulsan enjoyed a convincing 3-0 win over Incheon United on Saturday, beating them for the first time this season after settling for three straight draws. Ulsan have now defeated every opponent at least once this year. The three goals were Ulsan's biggest offensive output since a 4-0 win over Daegu FC on Aug. 13.

Jeonbuk took down Pohang Steelers 3-1 on Saturday to stretch their winning streak to four games.

Pohang, in third place, might have entertained the notion of pushing for second place but have fallen nine points back of Jeonbuk with four to play.

Elsewhere in the league over the three-day long weekend, Gangwon FC beat Jeju United 2-1 to move past them into fifth place Sunday.

On Monday, Suwon Samsung Bluewings shut out Seongnam FC 2-0 in a battle between clubs trying to avoid relegation to the K League 2.

The loss left Seongnam in last place at 25 points, 10 points back of Gimcheon Sangmu FC, who had a 2-2 draw with Suwon FC on Sunday.

Suwon Samsung improved to 37 points, still in relegation zone but now just one back of Daegu FC, the 3-2 winners of FC Seoul on Saturday.

Starting this year, up to three K League 1 clubs can be relegated to the second division.

The last-place team will be directly sent down to the K League 2. The 10th- and 11th-ranked teams must survive playoff matches against K League 2 opponents to stay with the big boys in 2023.

The season will resume with three matches Saturday and three more Sunday. (Yonhap)