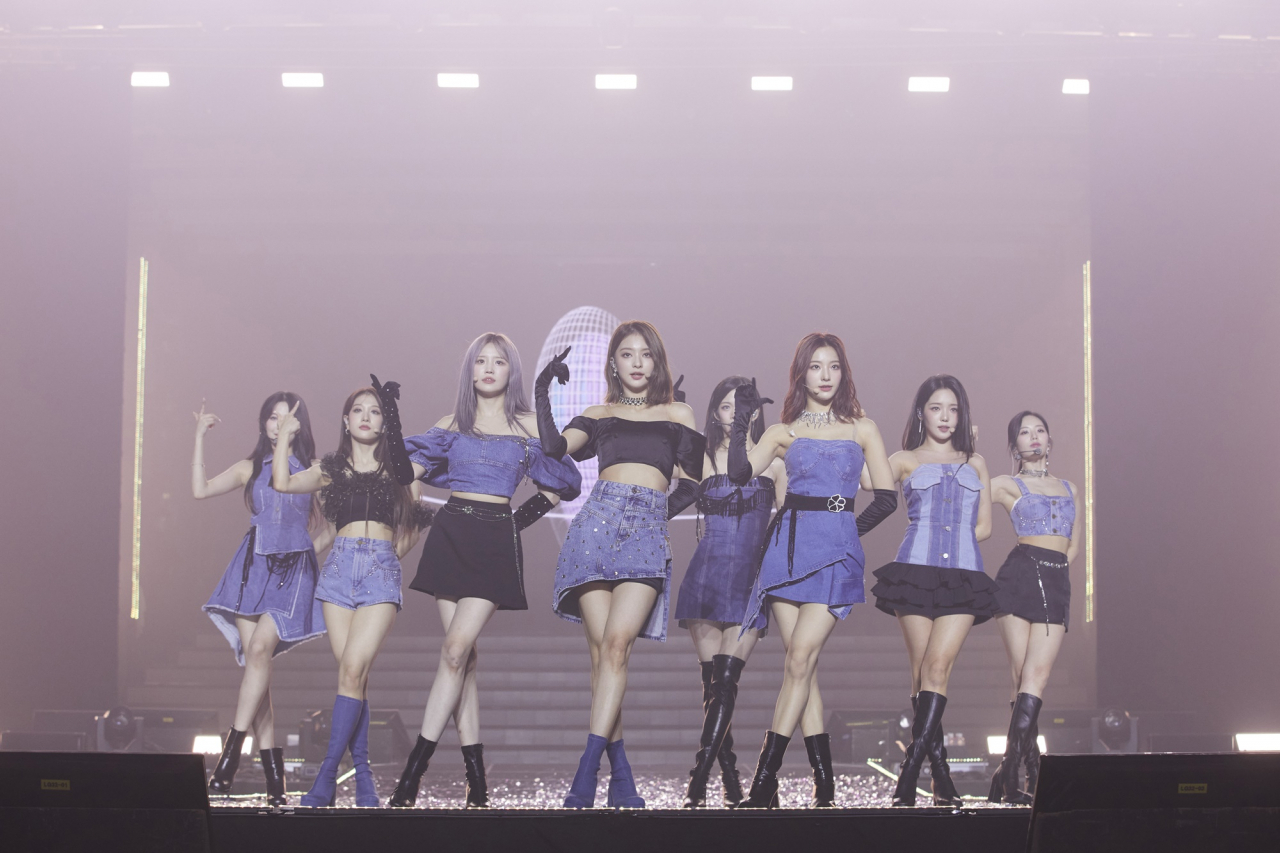 K-pop group fromis_9 dances during its "Love From." concert at KBS Arena in Gangseo-gu, Seoul, on Friday. (Pledis Entertainment)

It was a long and rough path for fromis_9 on its way to its first exclusive concert, with the band changing its agency once and losing a member in the meantime. But for fans, the three-night show proved the wait was more than worth it.

K-pop girl group fromis_9 on Friday kicked off its first stand-alone concert series "Love From." at KBS Arena in Gangseo-gu, western Seoul, and continued the show over the weekend.

The hall took on a special hue the second night on Saturday, as fans gathered in all pink everything, from hats to masks, to match the dress code of the night. The excitement hiked up fast as the logo of "Love From." appeared on the display at the front and lights dimmed inside the venue as the clock ticked to 6 p.m.

Welcoming the audience was "Somebody to Love." The band moved into the main part of the stage for the next song, "Glass Shoes," and continued into "DM" before speaking to fans for the first time that night. 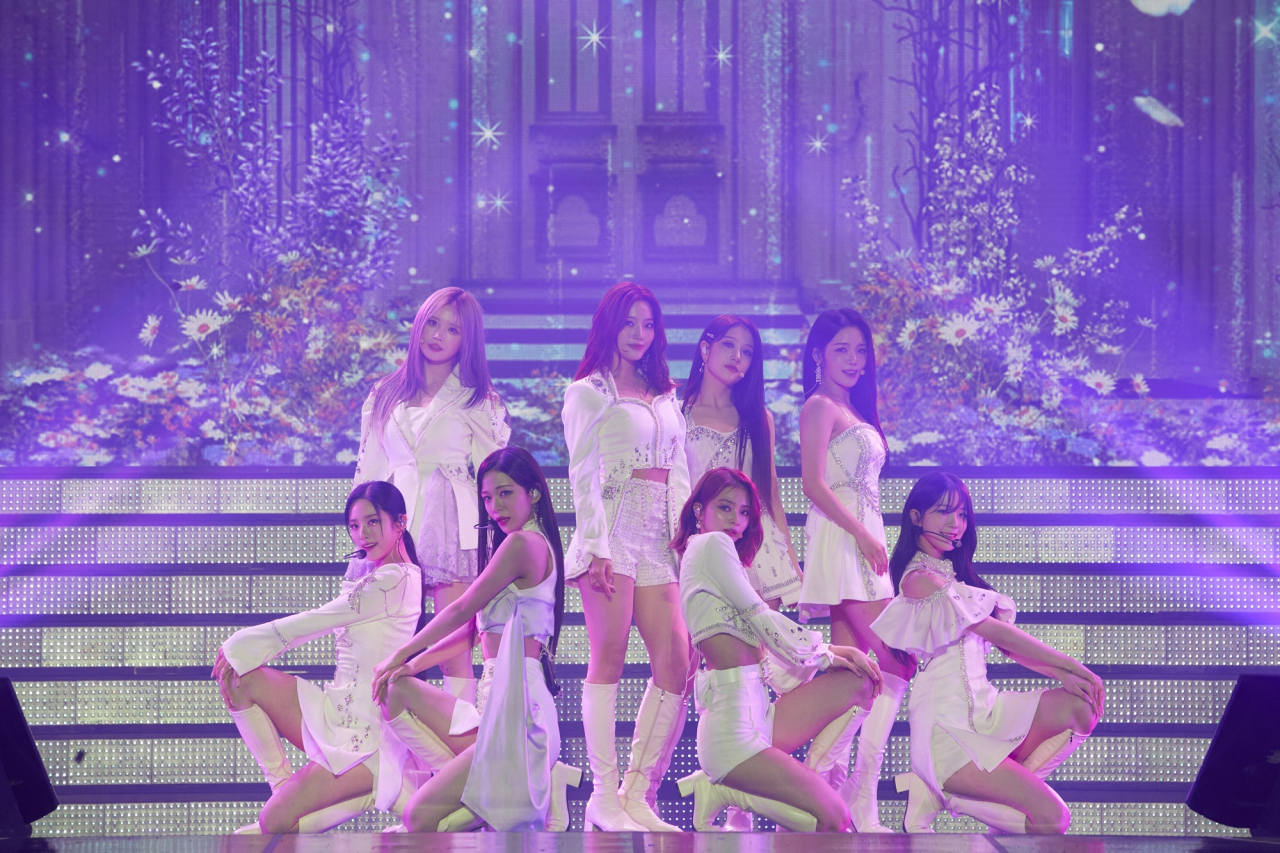 K-pop group fromis_9 strikes a pose in its "Love From." concert at KBS Arena in Gangseo-gu, Seoul, Friday. (Pledis Entertainment)

"It was a our first concert yesterday, and we realized how fun a concert is. I couldn't wait for tonight. We were rejoiced to see our fans being happy at the show that we'd prepared so hard for," Ji-won said.

Ji-sun added, "As the title 'Love From.' shows, we've prepared a time to deliver our hearts for flover," referring to the group's official fandom.

Performing 22 songs over 2 1/2 hours, fromis_9 took fans on a walk down memory lane of the past nearly five years since the group's debut in January 2018.

The group took the audience to its earliest moments with "Fun!" and "Miracle." They tempered the hype a bit with mellow ballads "Starry Night" and "0g," before bolstering the energy back up with hits "We Go," "Love Bomb" and "Airplane Mode."

The girl group then broke up into units and showcased their chemistry. Ha-young and Ji-won's duet of "Fly High" was a piece of drama in itself, while Ji-won, Ji-sun and Seo-yeon's collaboration for "Love is Around" showed immaculate synergy between the three vocalists. Ji-won, Ji-sun, Seo-yeon, Na-gyung and Ji-heon's powerful performance of "Hush Hush" brought out explosive cheers from the crowd.

The eight gathered back on the stage in the next part to showcase songs from their latest album, fifth EP "From Our Memento Box." After performing side tracks "Cheese" and "Up And," the show hit its climax with the album's lead track, "Stay This Way."

Another highlight of the night was the exclusive renditions of fromis_9 songs including a jazz version of "Feel Good" and a dance break for "Rewind." 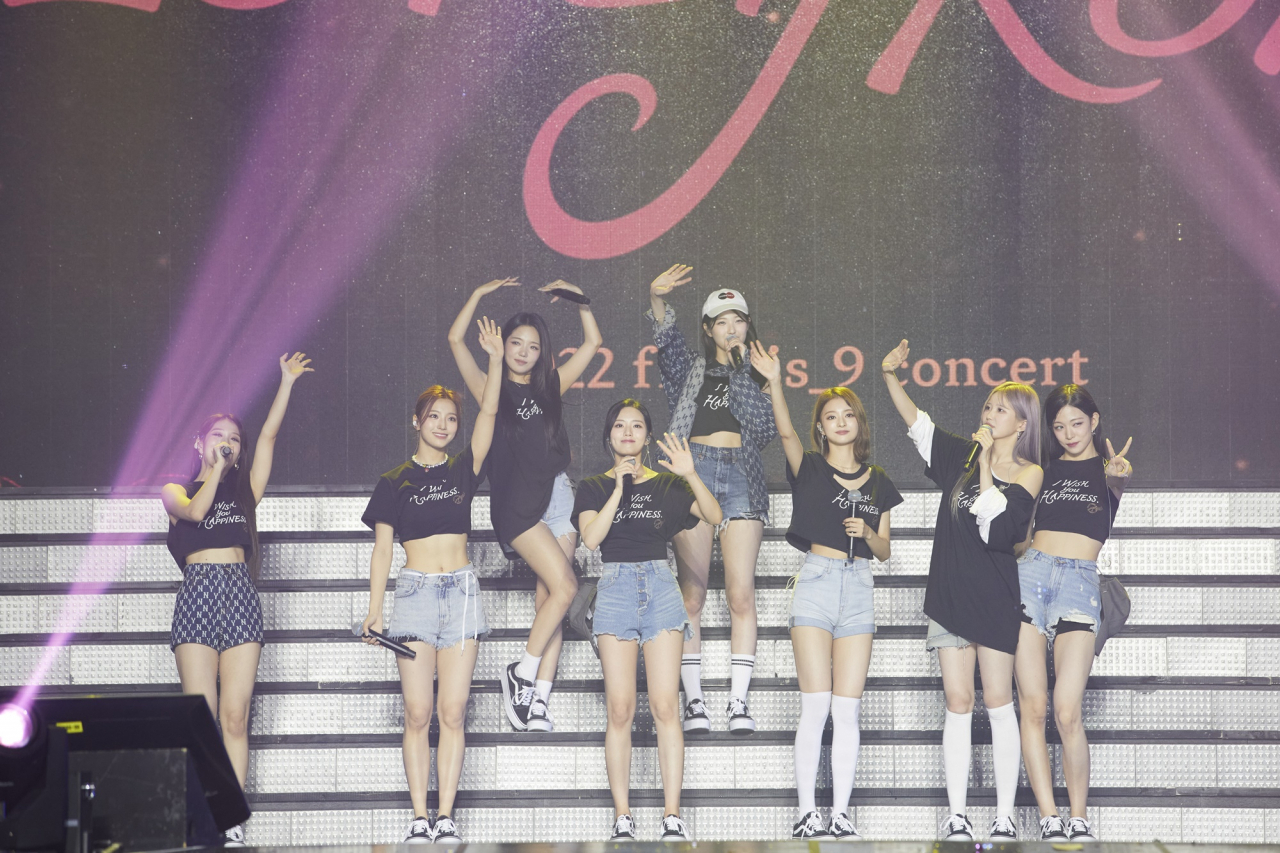 Finishing out the show, the bandmates performed an encore with "Rewind," "Blind Letter," "Mulgogi" and "Think of You."

At this point, fans unveiled a surprise gift, holding up a placard reading "flover's first love fromis_9" and singing "First Love" in unison, from the group's second EP "To. Day."

"We're taking home so much love again today, and it was such a grateful time. We'll work hard to make more opportunities like today. We'll return the love we received," Chae-young said.

"I don't usually sweat, but I worked myself really hard that I did. It's all thanks to you guys. Thank you for cheering for us," Ji-heon said. "There's so much we haven't tried yet. Please stay with us on all our firsts."

"Thank you for putting aside everything and coming here tonight. We're aware of such efforts so we'll work harder so that flovers think that it was worth coming to our concerts," Seo-yeon said. Na-gyung added, "Just as we've held our first concert, I'm looking forward to our next first experiences."

"I'd like to return all the cheers and applause you've given us. You guys are what drive us to hold a concert like this," Ji-sun said.

Taking the mic, Ha-young said, "It's the first concert for us, but also for flovers, and we heard that some of you feel empty inside after returning home from the loudness of the concert. But the loud love we gave is not going anywhere, so please don't feel like that."

"The movielike concert made by fromis_9 and flovers has come to an end. There are various genres of movies, but for the movies that we make together, I hope there is only a happy ending to them," Sae-rom, the group's leader, said in wrapping up the show. 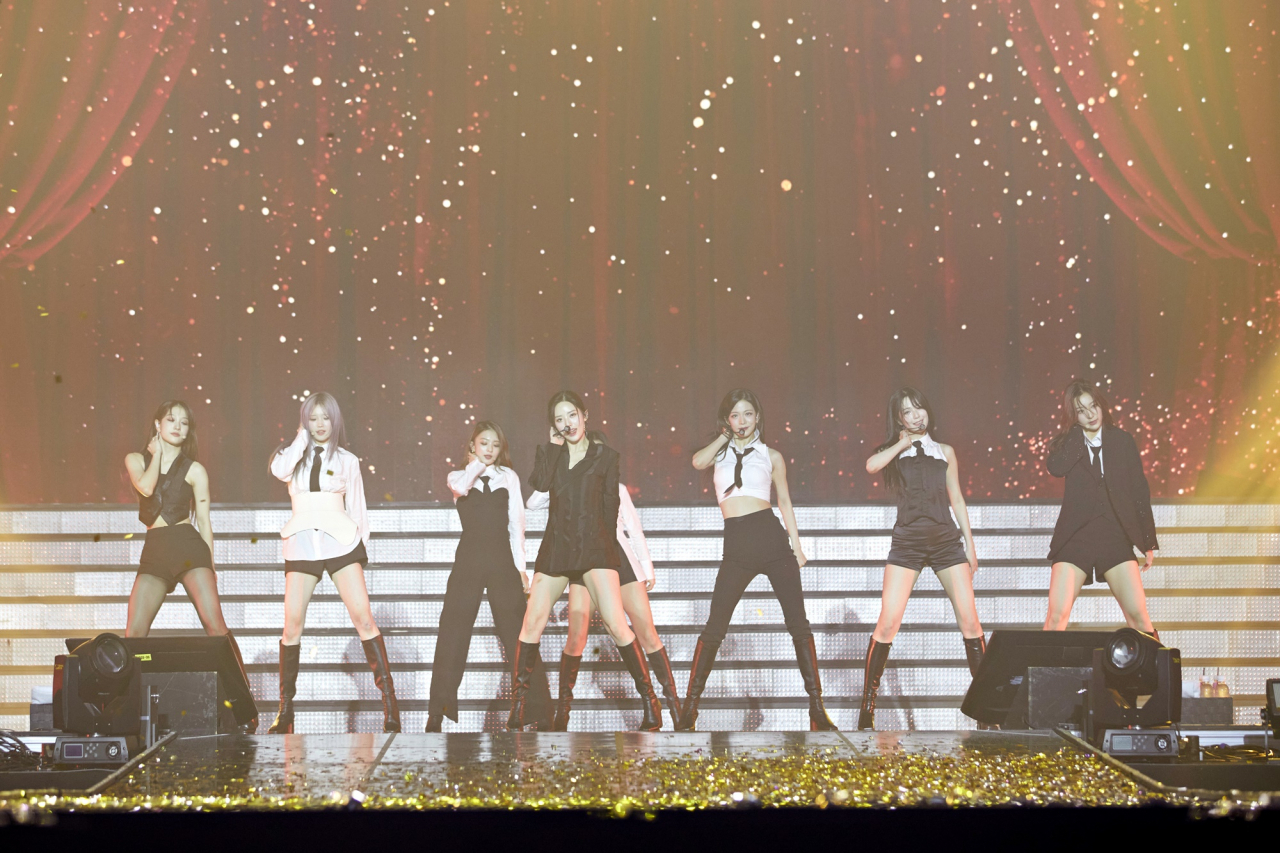 Fromis_9 debuted as a nine-piece girl group in January 2018 with the EP "To. Heart." The band was put together through Mnet's 2017 K-pop competition "Idol School" and made its first step into the K-pop scene as a group in November 2017 with the predebut single "Glass Shoes."

While the group steadily walked uphill since its debut, there have been a few unexpected events on its way, including its relocation to Pledis Entertainment in August 2021 and the departure of Jang Gyu-ri in July. "Love From." marked the act's first official appearance in front of fans after its transformation into an an eight-piece act.

Meanwhile, fromis_9 is set to take the "Love From." concert series to Japan and continue the show at Tachikawa Stage Garden in Tokyo on Oct. 7.